Veterans of New York Comic Cons who have attended seven of the last nine conventions.

The 2018 NYCC: Less Excitement But Still a Lot of Fun!

On the first Saturday of October we ventured into New York City for our annual trip to the four-day pop-culture extravaganza known as the New York Comic Con. The event's organizers say about a quarter-million tickets were sold this year, more than ever.

That may be true, but what struck us most when we were cruising the displays and booths of the main hall was the crush of attendees seemed less than in past years. Oh, there were still plenty of cosplayers dressed as Captain America, Wolverine, Wonder Woman and other characters, and gamers were still lined up to get a chance to play upcoming releases. It just felt like we had more breathing room and were able to walk the aisles easier than in past years.

Many of this year's booths and offerings were similar to years past, with perhaps a bit more emphasis on Games of Thrones-type merchandise. The fake swords for sale were real enough looking that I wouldn't be surprised if you attracted the attention of the police when carrying one.

One disappointment is that many of the exhibitors seemed to have cut back on the freebies being given away. We usually get a half-dozen or more free children's books from the book publishers, for instance. This time we got one sampler.

Instead of freebies, a number of exhibitors had raffles of merchandise. but with a catch: You had to be present at the end of the day when the raffle winner was picked. If not, you forfeited the prize. Since we didn't stay until the end we missed out on all of that.

Charlie Cox and the Rest of Daredevil's Cast

In 2011 the convention had the cast of much-anticipated Avengers movie. Three years ago, the big event was a screening of the returning X-Files series.

This year there didn't seem to be a major attraction that was a must-see. The closest thing was an appearance of the cast from the Netflix series Daredevil. While they did draw a crowd, none of the actors really have the star power of Tom Hiddleston and Mark Ruffalo. And while the Daredevil series is good, I just don't think it has the cult status of the X-Files.

The third season of Daredevil was set to premiere this month on Netflix.

Daredevil: The Complete First Season
When I was young, my favorite comic book was Daredevil.I was fascinated with the idea that the blind hero was a lawyer during the day and a vigilante at night. To my delight, the television series stayed true to that concept. In some ways, the series is actually better than I remember the comics being. Daredevil's law partner adds value in the series, while in the comics he was really just for comic relief. And the main female, Karen Page, is a much more fully realized character. You can get the complete first season on Amazon if you don't have Netflix.
Buy Now

Artists Alley, My Favorite Part of the Convention

My favorite part of the convention is always Artists Alley, a section where individual artists and writers set up booths to sell their own work and solicit commissions.I love checking out the artwork, and I'm always amazed that some of the artists spend the time working on new drawings (while assistants handle the actual sales and commissions).I don't know how they can concentrate with so many people looking over their shoulders.

The biggest draws in the alley when we were there were writer Chris Claremont, who was busy signing covers of old X-Men comics, and writer/artist Frank Miller. I kind of felt bad for some of the old-timers who weren't getting much attention, like Marv Wolfman and Joe Staton.

One guy who really drew a crowd was Darryl McDaniels, the `D' of the hip hop group Run-DMC. He began his own comic publishing imprint, Darryl Makes Comics, in 2014. 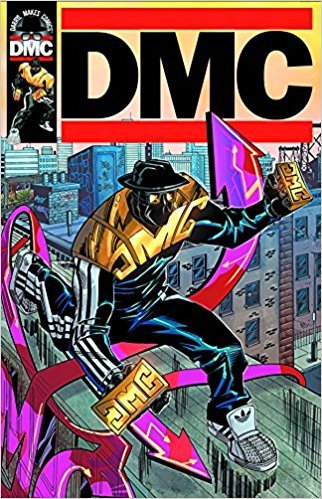 DMC GN Vol. 01, Darryl Makes Comics
Darryl McDaniels, formerly of Run-DMC, began his publishing imprint, Darryl Makes Comics, in 2014 with the series DMC. In it, he is portrayed as a superhero in 1985. DMC wears a stylished version of the outfit Darryl McDaniels wore on stage and has brass knuckles that leave an imprint of "DMC" on bad guys' faces. The series is a fun read as long as you don't take it too seriously.
Buy Now

Cosplayers Continued to be a Highlight of the Convention

And, Of Course, There Were Comics for Sale

Have You Ever Been to the New York Comic Con?