Miller Redefines the Look of a Marvel Second-Tier Character in the late 1970s!

Daredevil Visionaries: Frank Miller Volume 1 contains the first nine stories that Miller drew of Daredevil in the late 1970s (issues 158-161, 163-167). Bringing Miller's vivid artwork, influenced by film noir, to the title resuscitated a comic book that had been languishing for years and started Daredevil on a path that would make him one of Marvel Comics' most-popular superheroes.

Miller's vision seemed to inspire Roger McKenzie, the writer of most these stories, as the writing is tauter and the stories flow faster. Miller would gain enough influence that he would take over the writing duties as well with issue 168.

Miller Debuts as the Death-Stalker is Finally Revealed!

Daredevil No. 158 Marks the Beginning of a New Era

Frank Miller's first work on the Daredevil is the final issue of a multi-part tale featuring the climactic battle with Death-Stalker, a mysterious villain who had been popping up in Daredevil for about five years (since issue No. 113, to be exact). This collection doesn't include the first parts of the story because they weren't done by Miller, which is a shame.

But even if you haven't read the previous issues this part is pretty self-explanatory. The Death-Stalker and Daredevil face off for a final battle, with the villain's origin finally being revealed. The final fight plays to Miller's artistic strength, as the two adversaries face off at night in a cemetery. He brings a moody, street-level energy to the battle that makes it clear that the look of the comic has changed.

Miller drew the cover from a sketch by another comic book artist, Dave Cockrum, who was one of the stars of Marvel Comics at the time because of his work on the X-Men.

After five years of anticipation, finally discovering the identity of the Death-Stalker was a bit of a let-down for me. It turn out he had been a one-time opponent of Daredevil back in the late 1960s, before I began reading comics. I later scouted out the villain's earlier appearance and that story was pretty forgettable, which made it even worse.

After Miller's debut issue came a three-part tale that brought back two-bit villain Bullseye as a psychotic killer and really plunged Daredevil into the world of New York's gangsters.

Bullseye hires a gangleader to send his men against Daredevil so Bullseye can record the fights to figure out where he has failed when he has come up against the hero. Then Bullseye kidnaps Daredevil's ex-girlfriend the Black Widow to set up a confrontation in a closed amusement park. The fight ends with an emotional showdown that influences the relationship between Daredevil and Bullseye for years to come.

There's a lot to like in this tale. Bullseye had been introduced a few years earlier as an extortionist with a limited gimmick -- he could throw anything with unerring aim, making even the most innocent item a deadly weapon. I vaguely remember in his early appearances he used things like playing cards and fountain pens, for instance. Here he comes across driven by a maniacal need to revenge his defeats by Daredevil, and is willing to pay big money to succeed. This determination will lead him to become a major opponent of Daredevil over the next 25 issues or so.

One other aspect of this story had ramifications for decades, and not just for Daredevil. The fight between Bullseye and the Black Widow was extremely violent -- one of the first that I can remember where the woman is physically beaten pretty badly. The graphic violence would become even more commonplace in the ensuing years throughout many comic books.,

Daredevil vs. the Incredible Hulk!

This tale highlights what makes Daredevil so different from many other superheros. His senses may be super, but physically he is just an ordinary man. A well-conditioned athlete, true, but still a guy who gets injured fairly regularly in this hazardous way of life.

The fight against the Hulk showcases that vulnerability. It's clear that Daredevil has no chance of winning the physical battle, but he strives on knowing that innocent bystanders are in danger. In the end, that attitude, which is what makes him a hero, is what comes through and helps save the day.

Miller's art on this issue is wonderful. He captures the physical dominance of the Hulk, making it clear that in many ways he is a larger-than-life monster. And he illustrates the frustrations of big-city life perfectly through a subway scene involving the Hulk's alter-ego.

...and His Secret Revealed!

Left hospitalized by injuries incurred during his fight with the Hulk in the previous issue, Daredevil is confronted by reporter Ben Urich. Urich has sniffed out Daredevil's secret identity, and this issue recounts the superhero's origin.

The issue ends with an act that elevates the veteran newspaper reporter to the status of a major supporting character in Daredevil's world.

I can still remember the feeling of disappointment I had when I bought this comic at the store all those decades ago: Not another retelling of Daredevil's origin! Granted, he has one of the more interesting ones, but I remember thinking that it was retold so often that the issue would be a waste for me.

Boy, was I wrong! This version contained new depth and Daredevil's interplay with Urich made this a pretty compelling story.

Before Miller There Was Gene Colan

Before Miller's great success, the artist most associated with Daredevil was Gene Colan, who drew an 77 of 81 issues from Daredevil No. 20-100 as well as a dozen or so issues after that. His style was very cinematic and easily identified. Here is an appreciation we wrote of his work, including his time on Daredevil:

Gene Colan, Comic Book Artist: An Appreciation
Gene Colan developed such a moody, cinematic style during his six decades as a comic book artist that his work was as easily identified as the art of Jack Ki...

Where Does Frank Miller Rank Among Daredevil Artists?

Frank Miller has been considered one of the most influential comic book artists of the last 30 years in part because of his work on Batman, Sin City and Ronin. But he first shot to fame as Daredevil's artist, later artist/writer, in the late 1970s- early 1980s.

A number of fairly well-respected artists have also drawn the superhero over his almost five decades of existence.

Do you think Frank Miller is the best Daredevil artist of all time?

A search of Amazon for ``Frank Miller Comic'' under the category books returns more than 600 items! I am sure there is something available for every fan of Frank Miller so find your favorite one today!

Daredevil vs. the Death-Stalker From Issue No. 158 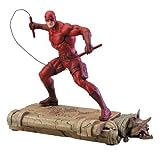 Daredevil Visionaries Volume 2 continues Frank Miller's run on the Daredevil series. Miller took over the additional role of writer with issue No. 168, introducing the ninja-trained assassin Elektra and making the title so popular it would be published monthly rather than every two months.

Here is a review of the second volume of the Daredevil Visionaries: Frank Miller collection.

If you want to collect Frank Miller's individual Daredevil issues eBay may be the best place for you to find them. As with anything on eBay make sure you read the description carefully and note any shipping & handling charges before you bid or buy.

Good luck if you decide to bid!

Growing Up With Spider-Man: The Day Gwen Stacy Died
Spider-Man's girlfriend, Gwen Stacy, died 40 years ago this summer, marking the end of one era in comic books and introducing a realism into the lives of sup...

If you are ever in Baltimore check out Geppi's Entertainment Museum for one of the greatest comic-book collections on display anywhere. See my review here for more details on what you can expect during a visit!

Of Family Vacations and Comic Books!

If you are interested in knowing more about who we are and what we write about please see here:

Spider-Man at the End of the 1960s: The Kingpin, Black Widow and Dr. Octopus!
Marvel Essential Spider-Man volume 4 contains issues Nos. 69-89 of the original series, with writer Stan Lee putting our favorite web-slinger through some of...

Spider-Man in the Early 1970s: Green Goblin, Death and the Anti-Drug Issues
Essential Spider-Man Volume No. 5 collects issues No. 90-113 of the original Amazing Spider-Man series. These stories, published in the early 1970s, include ...

Spider-Man in the 1960s: Dr. Octopus, the Vulture and the Debut of the Kingpin!
Marvel Essential Amazing Spider-Man volume 3 collects issues 44-68 of the original comic book series. All the stories were written by Stan Lee and drawn by J...

Thor, Spider-Man and the Avengers - Reviews of Marvel Masterworks Collections

Spider-Man in the Mid-1960s: The Green Goblin is Unmasked As John Romita Debuts!
Marvel Masterworks the Amazing Spider-Man volume 4 contains issues 31-40 of his original series. This 10-issue collection starts out with a magnificent three...

Spider-Man in the Swinging 1960s: The Debuts of Mary Jane Watson and the Kingpin, Plus the Hulk!
Marvel Masterworks Amazing Spider-Man Vol. 5 collects issues No. 41-50 plus the lead story of Spider-Man Annual No. 3. John Romita had taken over the art cho...

We hope you enjoyed this review. Now it's your turn to share your thoughts on Frank Miller, Daredevil, comic books or anything else related to this article.