1. The Xanth fantasy genre book series by Piers Anthony is one of the longest series written.

3. The Xanth book series begins with A Spell for Chameleon (published 1977).

4. Pet Peeve is the twenty-ninth Xanth book; published by TOR in 2005.

5. As of 2013, the Xanth series comprises of thirty-seven books.

6. The thirty-eighth Xanth book, Board Stiff, is planned to be released to the public sometime in 2014. 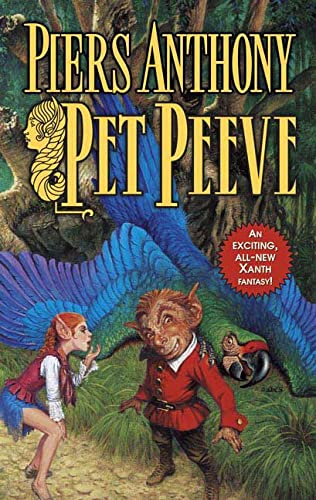 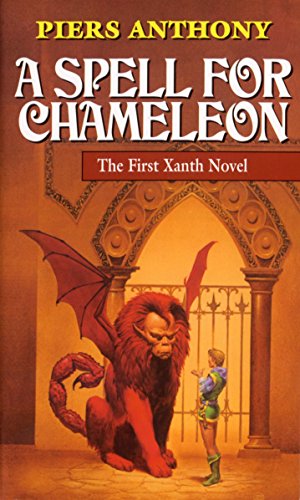 I was first introduced to the Xanth series when I purchased the paperback boxed Xanth trilogy in 1981 which comprised of A Spell for Chameleon, The Source of Magic and Castle Roogna. I was first in line at the local bookstore when Centaur Aisle, the fourth book of the Xanth series, was released to the public in 1982. I admit to being a long-term fan of this not-very-serious-light reading book series; been recommending the Xanth books since 1981 after reading the first three books back to back, daily until they were completely read. I am delighted Piers Anthony continues to publish more for in my humble opinion there could never be enough Xanth books published.

The rest of the book’s plot is the quest for Peeve’s new home. Piers Anthony expertly added a subplot about a befriended dragon couple that has the ability to read minds desiring a specific type of robot that forces Goody, Peeve and Hanna Barbarian into obtaining the robot for them in order to fulfill a promised deal with the dragons.

The introduction of this domestic robot into the world of Xanth turns into a robotic invasion as the newly formed robot factory makes more robots than the one it was solely supposed to create. The robots want to destructively take over the Kingdom of Xanth for its wood and iron resources. Goody, Hanna and Peeve, the first to realize what is happening while questing for Peeve’s new home, as fast as they are able inform Magician Trent, King Dor and Queen Ivy with the hope they can stop the robots’ destruction of Xanth. Yes, this battle of magic vs. machinery is as epic as the battle between Mundania and Xanth in the book Castle Roogna.

It is recommended by Piers Anthony in several of his Author’s Notes on the back of his Xanth books that all parents should read the Xanth books first to properly determine if their teenager is mature enough to read the Xanth series. I made my son wait until he was sixteen due to the “panties” innuendos. There are numerous innuendos that are hilarious, yet adult within each of the Xanth books. It is my opinion the Xanth book series was written in PG-13 (Parental Guidance highly suggested for minors thirteen and above).

For those unfamiliar with this fantasy genre book series, I highly recommend reading A Spell for Chameleon, and then in order the rest of the Xanth books. These books are definitely a “must read.” The entire book series does come with the warning that each book is the kind very few have the ability to put down upon beginning reading them, and the entire series may have addictive properties where one finds themselves in their local bookstore purchasing more Xanth books.

For more about Piers Anthony and his works visit his official website at http://hipiers.com/

Do you find the Xanth book series an excellent read?