The famous Shubert Theater Company built the Fitzgerald Theater in St, Paul, Minnesota, along with many other venues that people love unto the present age.

Educator, comedian, and author Garrison Keillor has presented his Saturday evening Prairie Home Companion radio show for over 40 years at the Fitzgerald and thousands of people have listened regularly. I'm one of them. Unfortunately, people are not yet able to love for 200 years as I would have it, so Mr. Keillor is retiring from the microphone and stage of the Fitzgerald in September 2016. I am missing Guy Noir already!

Happily for us, Keillor maintains a webpage on which he offers poetry of his own, classic poems, and new poetry written by people from all backgrounds. He has collected a few volumes of his favorites and I enjoy re-reading one of them. Below are some fragments of these uplifting poems to send you through the rest of your day in a more lighthearted manner.

A Prairie Home Companion
This is an enjoyable film of the Keillor radio program, with Kevin Kline as Guy Noir and Meryl Streep as one of the girl singers. Woody Harrelson and Jon C. Reilly perform "Lives of the Cowboys." Many more stars add their contributions to a fine movie based on the old time radio show format.
Buy Now

Garrison Keillor's introduction to this volume of verses could stand by itself as literature.

Poets are artists who commemorate, commiserate and celebrate. They remind us of situations that we should not forget and teach us for the first time about other circumstances that we knew nothing about. They teach us to refuse to tolerate the intolerable and to pay tribute to the unsung everyday hero.

Shubert Theaters Since the Late 1800s

The Shubert Theater Company began as one theater built and developed by the three Shubert Brothers before 1900. At the turn of the century, they began putting on NYC productions and to date, nearly two dozen Shubert Theaters operate across the country, many still alive and full of theatergoers on Broadway.

The Fitzgerald in St. Paul was originally called the Shubert and our country was home to perhaps three dozen additional Shubert theaters until the 1970s. The Shuberts included vaudeville shows for several decades as well, until the 1960s.

Garrison Keillor's radio program includes songs, poems, and stories. Its advertisements are usually jingles about fictitious products like Powdermilk Biscuits, the biscuit that gives shy persons the gumption to get up and do what needs to be done.

Humor is interspersed with serious and provocative words and verses for good balance and it all makes people think and grow as people - laughing people in the end. A sense of humor will help you through hard times, whether it is the loss of a loved one, a divorces, political trials, a war, or a national disaster. Humor helps.

Childhood, we think, should be a happy time. However, sometimes it is not. Parenthood can be more disillusioned and difficult to manage, but we hope for the best.

Poetry included in Good Poetry For Hard Times includes a few for parents and their children. I think you will like them all, but part of one is included below for you.

A Poetry for Childhood and Parenting

Here is the first stanza to a lovely poem about mother and child:

For A Five-Year-Old by Fleur Adcock

A snail is climbing up the window-sill

into your room, after a night of rain.

You call me in to see, and I explain

that it would be unkind to leave it there:

it might crawl to the floor; we must take care

that no one squashes it. You understand,

and carry it outside, with careful hand,

to eat a daffodil.

Fleur Adcock, CNZM, OBE is a New Zealand poet and editor. Of English and Northern Irish descent, she lived much of her live in England. She is called one of the most influential poets in the UK, with "deceptively quiet poems" that move the soul and the mind. She writes much about nature and out relationships with animals, touching on details that we may not realize that we see. She published her own collection of 40 years of poetry about 2000 and a second volume called "Dragon Talk" in 2010. 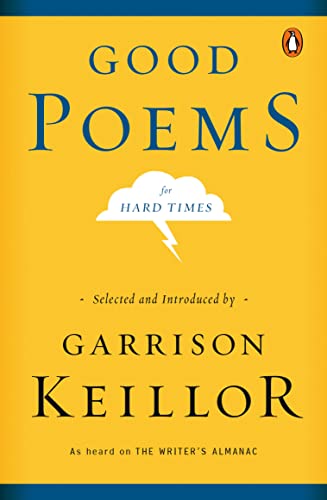 Good Poems for Hard Times
Here is a collection of poetry that I enjoy over and over. Some are happy, others uplifting, and others thoughtful and mellow. They all improve one's frame of mind. These are poems that take you away from today's problems and give you mental rest so that you can return to solving them with new energy.
Buy Now

They say such nice things about people at their funerals that it makes me sad to realize that I'm going to miss mine by just a few days.

Here is a humorous except about a difficult and ever changing language, from the poem Ode to American English by Barbara Hamby:

...but no one uses the King James anymore, only plain-speak versions,

in which Jesus, raising Lazarus from the dead, says,

"Dude, wake up," and the L-man bolts up like a B-movie

This poem is staunchly serious and brings attention to problems of race relations and justice in America, as does the docu-drama film Straight Outta Compton (2015).

in a desert land

the U.S. ground troops were

most of whom had joined

because it was the only job

Do you ever have trouble starting your car in cold weather? This poem is for you and here is an excerpt of it:

Starting the Subaru at Five Below, by Stuart Kestenbaum

Finger tips numb, nose
hair frozen, I pump the accelerator
and turn the key. The battery cranks,
the engine gives 2 or 3 low groans and
starts. My God it starts.

The following verse speaks of the lunch break a busy farmer takes with his several children. As typical of most American farms, the whole family worked together, pitching hay, harvesting apples, perhaps cutting ice for sale in the winter, feeding the animals, and more. Not everything was fun, but it was always worthwhile.

My father's lunch, by Erica Funkhouser

We could see it was an old meal
with the patina of dream
going back to the first days
of bread and meat and work.

Here is another poem of childhood trials - the children's emergency room.

Your child is lying on the table
Restrained, You must be still
The nurse who cradles her head is saying
And the doctor is embroidering
Delicately patiently like a kind aunt
But there is not enough solace in that
To make you stop thinking of other children
Whose hurt blooms like a dark interior bruise

Poems at the National Book Festival

Poetry and its appreciation are a large part of the National Book Festival held at the end of summer every year in Washington DC. The video below features Garrison Keillor discussing an anthology of poems at the book festival in 2011.

Good Poems, American Places
This newest collection make another excellent book. It poems include those about being on the road via trains, buses, and cars; summer places, city places, and many places all over the USA. They will bring back memories and give you new ideas.
Buy Now

A Recommendation for Good Poems