This hub responds to a question asked here on HubPages - my answer proved too long, so here it is, now with many helpful links and even videos: tips for reading and understanding Shakespeare...

Shakespeare isn't that difficult! - Read Aloud - Use notes and glossaries - Useful Notes on Language - Ask Questions - Become accustomed to the language - Twitter! - See the plays - Shakespeare on HubPages - Ask and you shall receive - Shakespeare is fun! - Further helpful links

Did you know that only 5% of the words Shakespeare uses are actually obsolete nowadays?

This is very important to understand: 95% of Shakespeare's words are still in use today.

So, yes, the language is structured a bit differently, but it is far more accessible than people tend to believe - don't let a mistaken pre-conceived notion get in your way.

Shakespeare on Toast: Getting a Taste for the Bard
Buy Now

More such helpful tips can be found in Ben Crystal's "Shakespeare on Toast", of which Dame Judi Dench said:

"This is a brilliantly enjoyable, light-hearted look at Shakespeare which dispels the myths and makes him accessible to all. I love it!"

Reading aloud is very useful and satisfying. Shakespeare uses sound and rhythm to help in his expression, so this can help you to understand what is being said and felt. His words still speak to us today, and can be interpreted in many ways (see video for a comparison of the readings of experience and youth).

While seeing a verse layout may seem daunting at first, Shakespeare's 'blank verse', that is verse that does not rhyme, is actually written in a form that is very close to normal speech. This particular form he uses is known as 'iambic pentameter' and you can find out more about this in the hub Shakespeare's Verse: Iambic Pentameter - It's Easy!
. 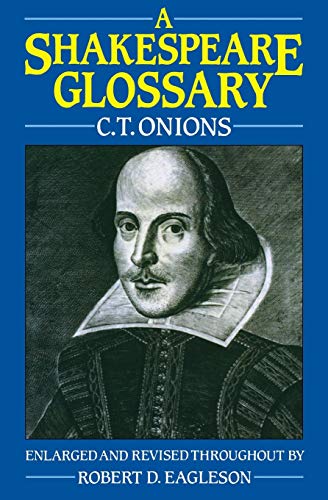 Use notes and glossaries

If you are buying a script, there are many publications that have very useful notes. Take a look at a few so that you can find one that suits your way of reading and understanding. There are ones better for actors, for general reading and for students - see what you find works best for you. There are many stocked in libraries for you to try before you buy.

You can also find helpful glossary books, which will cover the complete works rather than individual plays (though this is not the same as notes on historical context, phrases, etc.) Two worth finding are "A Shakespeare Glossary" by CT Onions and the more modern "Shakespeare's Words" by David and Ben Crystal.

"Shakespeare's Words" is also available - for free! - online at www.shakespeareswords.com and includes the complete works with notes beside the lines. (David Crystal is an expert on the language of Shakespeare's period and Ben is an actor.)

A useful page with help for terminology, pronunciation, pronouns such as thou / thee / thine and more, including a few in-depth examples of working with Shakespeare's language.

Become accustomed to the language

Do the occasional search online for Shakespeare quotes and have fun generating Shakespearean insults - when you get used to seeing his language you become accustomed to the slight differences in sentence structure and familiar with many of his words and phrases.

As mentioned, this hub began as an answer to a question asked right here on HubPages (link below).

There are many Shakespeare enthusiasts who love to help and I am just one. To contact me at any time, see my profile for my websites, and - of course - you can comment below.

There are a lot of Twitter users who are eager to help anyone interested in Shakespeare. Through tweets, tags and direct messaging you can pick up a lot of information and ask those all important questions.

There was even an international 'Ask Shakespeare' day in 2011, where experts answered questions with the #askshakespeare tag. This is likely to become an annual event, so visit the Shakespeare Birthplace Trust to find out more!

You can also get used to Shakespeare's language by following certain people / organisations on Twitter. You can find me via @DFActing and check out my Shakespeare list of tweeters, as well as ask for help. Also, @IAM_SHAKESPEARE tweets the complete works, so you can receive the language in short bursts and spot anything you want to follow up.

Seeing the plays can be very important for the understanding mentioned in this hub's title.

It is always useful to see the plays live whenever you can, so check out your local theatres - Shakespeare plays are still popular worldwide. Of course, there may not be one right by you exactly when you need it, but there are also many fine films available.

As well as buying or renting, you can check out YouTube, too - it is surprising how much you can see for free there, including Trevor Nunn's Twelfth Night. In fact...

Here is a hub about Twelfth Night which includes The Animated Tales version (the BBC Animated Tales cover a number of Shakespeare's most popular plays) and other entertaining and helpful links.

Other hubs of mine, to do with Shakespeare, linked below, include one that helps with iambic pentameter - the verse form Shakespeare uses - and that have entertainment as well as information, helping to make Shakespeare accessible.

The question that stimulated this hub can be found here, where others have also advised, and, of course, you can search for other Shakespeare-related hubs.

This, too, is the perfect opportunity to:-

Ask and you shall receive!

Ask for what you would most like to see that would help you - in hubs, blogs, etc. (For instance, you might be interested in the pros and cons of reading Shakespeare in modern 'translations'.)

I am an actress and acting coach who specialises in Shakespeare and I want to create helpful content here and in my Acting Shakespeare wordpress blog. I am passionate about this subject and truly want to offer quality content about it.

So - tell me what you want to read!

Shakespeare has inspired a great many people over the ages, and as you become familiar with his works and keep an eye out for Shakespeare in life, you will keep finding more and more responses to him, in dramas, musicals, books and their titles (Agatha Christie, anyone?) and also in less obvious areas, such as business training and politics.

Exploring Shakespeare in his works and influences can bring great enjoyment, whether you are revelling in his comedies, experiencing cathartic release through his tragedies or finding his influences in the world around you.

This video is just one little influence for you to enjoy, and in it, impressionist Jim Meskimen actually relates his chosen celebrity to what he is saying (I especially like the Simon Cowell choice).