Remember during the (maybe) mid to late '70's into the '80's when publishers would do commercials for novels? They almost seemed like the trailer for a movie and if they did it effectively, the novel became a bestseller.

For some reason, I thought Starring had a commercial, but I'm not sure. Trust me, if it didn't, I'm not sure how the book could have become a bestseller.

Beginning in October of 1965, we're introduced to (in order of appearance) Suzann Jaffe, Martin "Marty" Howard, Philip "Phil" Ehrlich, Olivia "Livy" Blake and Kennen "Ken" Forster. Each character is pursuing some niche in the entertainment industry and soon their paths will cross.

Beginning with Suzann, she wants to become an actress and after starting with summer stock, she winds up selling tickets at an off Broadway theater, where the show is about to close. When we're first introduced to her, the star has called in sick and the understudy hasn't shown up yet, so she begs to go on since she "knows the show inside and out." Her request is always denied until she sees a flyer for a talent contest that's coming up.

On the night of the talent contest, she meets Marty Howard, a political comedian who has found some work, but would rather partake in demonstrations. He's guided by two former stand up comedians and sometimes takes their advice to heart. Other times, he would rather do it his way.

Phil is the composer of the group and is being mentored by one half of a famous composer/lyricist team. During college, he wrote the score for a musical and had received rave reviews and has had trouble finding work within the theater community. Although he's making a living playing the piano, he's doing it in a gay piano bar and wants to quit.

Livy doesn't know what she wants to do. She's taking acting classes (with Suzann) and works at Bloomingdale's by day. Both she and Suzann are practically strangers to one another since Suzann is more focused than Livy. One night, she accepts a blind date with Ken and they end up falling in love.

By day, Ken works at his father's design studio in the garment district and wants to be a writer. He has a couple of books that he's started, but doesn't have the drive to complete them.

When they all get together in July of 1966, Livy comes up with an idea for a comedy troupe (she and Ken had found minor success as a comedy duo) which would incorporate Phil's songs with Suzann singing. Marty, who happens to be at the bar, makes his way to Suzann and she introduces everyone. Once Livy proposes the idea, everyone's on board.

The troupe becomes a success and eventually go their own way after Marty goes to Washington for a demonstration in October of 1967, he's beaten by the police, arrested and then quits the group. Ken is livid and Suzann has also left the group for a small role on Broadway. After their replacements don't work out, the troup disbands and everyone tries to make it on their own until they're reunited under tragic circumstances in April of 1974 and then finding triumph in March of 1976.

When I first read the book, maybe in 1978, I'm sure that I though it was one of the greatest things that I had ever read since I thought it would make an excellent mini series, my copy has gone everywhere with me. I don't think a mini series would be in order now and because of the time period, it's already dated. It actually dated itself when it was published in 1977.

Not only is this tome 596 pages long, but, the "standard" print for novels back then was pretty tiny, so be sure to wear strong readers if you want to read it!

The set ups take too long and I think Fritzhand had a thesaurus sitting by his typewriter. I don't know if he's trying to impress the reader, but there are a lot of times that it's easy to just get lost. I'm thinking the reason is because the book is so long.

And with not enough dialogue, the pace is very slow. When you look at the next page and see what amounts to a full page, not broken down into paragraphs, you sigh and then go with the flow.

Over the years, I had tried to read the book, but didn't get very far. I think one of the reasons too, is Suzann, Marty and Ken are Jewish and they throw out Jewish slang. Some is everyday and others you're not so sure about (Suzann also likes to speak sometimes in French) which was lost in translation.

I'm going to say goodbye to my copy and I hope that in another forty years, I don't have a craving to revisit Starring. 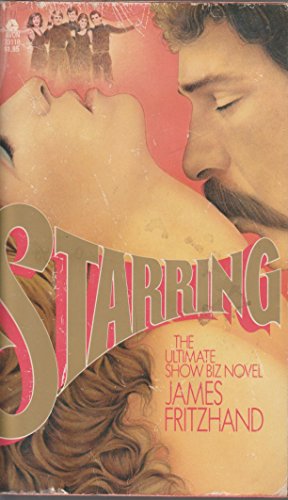