Christmas traditions come and go and when it comes time to decorate for the holidays, there are some items that hold a special meaning and memories come flooding back as if the events had happened only the day before.

In the case of author Jerry Bledsoe, The Angel Doll is probably his most fondest memory of a joyous Christmas past.

Set in Thomasville, North Carolina in the early 1950's, he and his best friend Jimmy "Whitey" Black are two typical ten year olds, but their first meeting is hardly something friendship is based on.

They only begin to become friends after an older boy punches Whitey in the shoulder and he thinks that Jerry did it. Again the older boy punches him and this time the two start to fight and the circulation manager makes the two shake hands and then makes the announcement that there was a route was opening soon. He says that the two can have it, only if they can share it and get along.

At that point, the two become best friends and share the responsibility of the route.

When Whitey moved into town, Jerry learned that his father had died when he was six and the man that was living with them was his mother's boyfriend. He also had a four year old sister, Sandy, who was suffering from polio.

Every day, Whitey would read The Littlest Angel to Sandy and while she knew it by heart, she asks Whitey one day if she's going to be an angel. He tells her that she already is.

With the Christmas season approaching, Whitey wants to get Sandy the best present that he can afford and finds a doll in the window at a local department store. His goal is to find an angel doll, but since no one had ever heard of such a thing, he decides that this doll would indeed make the perfect angel doll for Sandy.

He asks another friends mother to see the doll and she agrees that it would make an excellent angel doll and she tells him what she plans to do with it. She tells him that she's not going to charge him, but he insists and they settle on a dollar charge.

When Christmas comes, Jerry is excited that he had gotten a bicycle for Christmas (it wasn't fancy, but as he kept telling his parents, he'd be able to make more money on his route if he had a bicycle) and later that day, he sees Whitey walking on the railroad tracks for the last time.

As Jerry began his writing career, he was at a book signing and the mother of his other friend, Mrs. Barnes, tells him that Whitey never came to pick up the doll and she's had it for the last twenty-five years and she gives him the doll.

Every year, he would bring the doll out and display it with his family and one year while on assignment for a magazine, he was having breakfast in the hotel restaurant when he saw a family at a table nearby and the little girl had an almost perfect replica of the angel doll.

He learned that she had received it at the hospital and then he called the hospital to find out more about the doll.

But, he never heard from Whitey after that Christmas and knew that somehow, Whitey had something to do with the anonymous gift of the dolls. 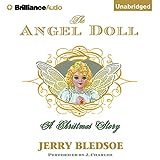