Skye's cousin Riley is getting married --- to an older, very wealthy guy --- but instead of having the wedding in California, where she lives now, Riley wants to have the wedding in Scumble River.

Skye was Riley's hero back when Skye was a teenager and Riley was a little girl.

Riley also wants to please her grandma Denison, who does not like to travel much.

Skye's other grandma, Antonia Leofanti, was the murder victim in the second Scumble River Mystery, Murder of a Sweet Old Lady.

Click here if you want to read my general introduction to the entire Scumble River Mystery series.

This is the twelfth novel in the Scumble River series, featuring Skye Denison. Skye is a plus-size gal. She works as the school psychologist. She divides her time among the grade school, middle school and high school. She is also the psychological consultant for the Scumble River Police Department.

Wally Boyd, her main squeeze, is the chief of the Scumble River Police Department.

At least, for right now, he's her main squeeze. But, her former squeeze, Simon Reid, the coroner, has also asked Skye to take him back.

One of the main problems with that is --- Wally has already asked her to marry him. But, she has not yet given him her answer.

At first, Skye was willing to be in the wedding.

But then she gets drafted to act as assistant to the wedding planner, Belle Canfield, narcissistic egomaniac heiress to a large hotel chain fortune.

One night, after one of the pre-wedding festivities, Skye finds Belle's body in the cooler they'd rented to store the wedding flowers.

Too Many Secrets? Or Not Enough?

Skye and Wally question all the vendors, wedding party, and everyone associated with the wedding. It doesn't seem like there are going to be any breaks, but they do discover lots of juicy secrets.

Meanwhile, Skye has been forced to take over the late wedding planner's duties entirely.

Murder of a Wedding Belle 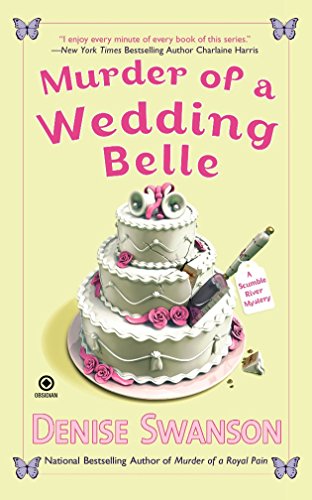 I did not feel that the solution to Belle's murder was especially creative. I liked the book for the mini-stories that Skye and Wally learn while interviewing the characters. I also liked the characters themselves.

The Doozier family --- a sort of Scumble River version of Beverly Hillbillies --- figures importantly in this book, as they frequently do.

The Dooziers also hold a wedding. Elvis Doozier finally succeeded in getting hitched --- perhaps none too willingly --- with Mavis Beckman.

Mavis' family owns many acres, so this could be a good thing.

When Skye attends the Doozier wedding, she notices some of the decorations seem a little familiar. Then, she remembers that Justin and Frannie --- two college students who'd helped Skye with odd jobs --- had told her they'd heard an animal rummaging around in the dumpster one evening.

At least, they had thought it was an animal.

There's a chase scene during the wedding reception, ending right in . . . I can't give it away, but

. . . well, here's a hint: It has tiny little Swarovski crystals and pink rosebuds all over it.

At the end, there's a free preview chapter of Denise Swanson's next book, Murder of a Bookstore Babe. I'm wondering what happened with that marriage proposal from Wally, and that plea from Simon, so I'm looking forward to reading this book.

Here's a little bit about that preview chapter. 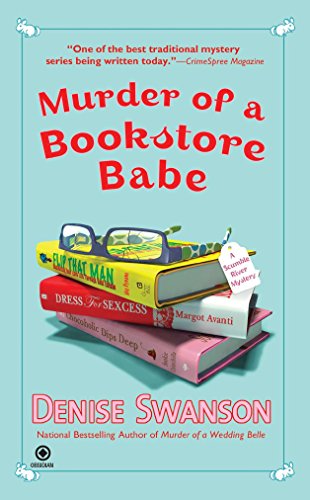 Murder of a Bookstore Babe

Skye is reading an ad announcing the grand opening of a new bookstore, Tales & Treats.

She's really looking forward to having a bookstore so close to her house. Plus, there will also be gourmet coffee, specialty teas, and pastry. (Yes, she's my kind of gal!)

But, she didn't know that the bookstore "had already managed to ruffle the fur of several of Scumble River's most vocal citizens."

Skye doesn't frequent the teacher's lounge much, because her job --- school psychologist --- requres confidentiality, and teachers like to gossip at the lounge. She can't participate.

But, today, there's cake in the teacher's lounge, and it's her favorite -- chocolate!

Unfortunately, though, the "birthday girl" is not her favorite teacher at the high school.

Skye waits until most of the others are gone from the teacher's lounge, because she doesn't want to be seen eating cake that was meant to honor someone she dislikes.

Unfortunately, her timing is a little off.

If I'd Known You Were Coming, I Would not Have Cut that Slice of your Cake.

As Skye is almost about to cut herself a slice, she realizes the birthday girl, Pru Cormorant, is sitting on the sofa, watching.

"Pru's sticklike arms and legs stuck out at awkward angles from her egg-shaped body, and her too-small head appeared in danger of tumbling off her neck if she made any sudden moves."

So, of course, Skye is too sheepish to eat the cake right in front of this unpleasant person.

Then, Pru tells Skye that she will be circulating a petition against Tales & Treats. Pru does not think kids should be exposed to romance or science fiction novels. She fully expects Skye to sign the petition, if she really cares about the young people.

Pru has heard that one kid bit his mom in the neck and tried to suck the mom's blood because he had read a vampire novel. Then, another girl in another town wanted to sacrifice her baby after she read a book on witchcraft.

Skye's mom is a police dispatcher, and her significant other is the police chief. Skye feels that these stories are probably untrue, because the police department would have known something about them.

Pru insists they were hushed up. Nobody --- not even the police --- knew anything.

Skye promises to speak with the owners of the bookstore to find out more about the books they'll be offering, and to what age groups.

No cake after all that work.

A General Introduction to the Scumble River Mystery Series