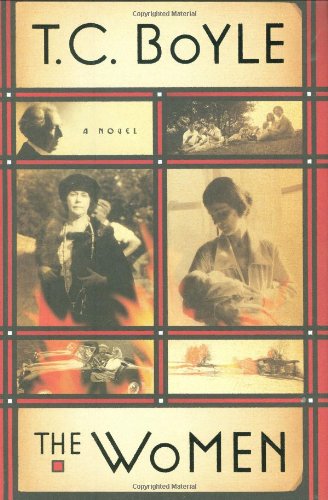 And Frank Didn't Give a Damn, According to Boyle's Account of the Scandalous Life and Times of Frank Lloyd Wright

In an interview about his newly released book The Women, author T.C. Boyle confessed that he never knew much about Frank Lloyd Wright until he moved into Wright's George C. Stewart House in California. Before reading Boyle's book my own knowledge of Wright was also sketchy, consisting of vague images of jutting planes, a hokey Simon and Garfunkel song and a blurb about Jugendstil from my high school A.P. Art History textbook. This past weekend all that changed when I gorged on Boyle's toothsome book detailing the lives of the women who orbited Wright's libidinous and prodigious genius.

Boyle's novel, set in the early 20th century, chronicles the lives of Wright's three wives and mistress from the point of view of Tadashi; a fictional Japanese apprentice and biographer of Wright who inserts footnotes and, we are given to understand, spent many years at Taliesin- Wright's physical and spiritual home in Spring Green, Wisconsin.

A book I read on the Art Noveau movement, the time when Wright was at his height of fame, called it a period of "spiritual anxiety": old forms of being and living dissolved into the new social, cultural, and moral climate of industrialization. The Victorian era was over and women began to, figuratively and literally, loosen their corsets. Ideas about sex, art and life eddied and swirled. These threads of anxiety are cleverly interwoven throughout the text of The Women.

Although Wright's architectural genius is explored, the novel is mostly centered on the experience of the women in Frank's life, thus the title. All four women in the book could be viewed as before, during and after aspects of the Modernist movement taking place during the early 20th century in literature, art and science.

Wright's first wife, Kitty, is a remnant of 19th century sensibilities, embodying the past and the "separate spheres" ideology that reigned under Queen Victoria's rule. Her nickname Kitty (given name was Catherine) denotes a harmless pet. In the 19th century a woman was supposed to stay in her world of "Kinder, Kuche, Kirche" (children, kitchen, church). Wright, an egomaniac and control freak, even goes so far as to design and dress Kitty as if she is his own doll and their house in Oak Park is a dollhouse.

Wright shakes off his wife, and twenty years of marriage and six children, to have an affair with Mamah Bothwick Cheney, a woman rooted in the 20th century and a staunch women's rights supporter and an acolyte of the Swedish free love activist Ellen Key. It is for Mamah that he builds Taliesin in Wisconsin.

After Mamah, Wright marries sculptress and narcissistic southern belle Miriam Noel, a woman steeped in the drama of Art Noveau and the Parisian scene. But Olgivanna, a Russian foreigner, is the wife he will ultimately spend his golden years with. Olgivanna's angular asceticism sets the stage for the post-modern era of track homes and ennui that will eventually follow Wright after his death.

Does Wright really love these women? It is hard to say and I won't give away the plot by explaining further.

Rather than tell the story straight, Boyle employs an interesting narrative device by beginning the story with Olgivanna, working his way back to Kitty and Mamah at the end of the book, then looping back to Miriam for the finish. Doing this challenges our notions of perspective in much the same way Wright did with his buildings. We also get to pop inside the heads of all of the characters to get their spin on things. Using an omniscient point of view limits our ability to empathize with the characters and keeps Wright and his women somewhat removed from us as readers.

Some reviewers on Amazon have also complained that the prose is often very flamboyant and purple, with needless frills and inexplicable phrasing. The book is replete with such gems as: "But word does get out. Word travels fast, it seeps and bubbles and runs in the ditches like heavy rain in a wet country, and when she began to show, when there was no hiding it anymore and the leaves turned and dropped from the trees and the clouds moved in low to scatter sleet across the new windows and new roofs of Taliesin II, the phone rang again." (Boyle, 67)

Why did Boyle do this?

In my opinion Boyle's book, though the characters are finely wrought, is less about character and more about the structure of a novel. The book itself, the way it is organized and written, is a symbol or allusion to Frank Lloyd Wright. Like Frank and his buildings, the book is artfully and carefully built: a tad narcissistic, with emotional, sometimes florid, flourishes. And yet it is also stark, remote and ineffable-completely unknowable and often new, even though you turn its pages and crease its binding. This is a book about people, yes, but it is also the embodiment of an idea and an ideal that can be found in the formidable and flame tortured Wright home Taliesin. The Women represents a society on the cusp of nihilism and narcissism, invoking in its pages the spirits of Darwin's champion Clarence Darrow, madness, modernism and artistic passion.

Okay. Go on with your bad English Lit self! But is it worth reading?

I admit it. I am an English Literature nerd. I never met an 18th or 19th century book that I didn't like and have often shied away from those books written in my lifetime. Luckily I am a devotee of bubblegum mags so I read about this book in O. Thanks to synchronicity I found The Women at my local library and, voila, I am now a T.C. Boyle fan. I am ashamed to say that I never read a book by T.C. Boyle until now. He is fabulous writer.

What more can I say? I loved it and relished every morsel that I read. The Women is lush, cinematic, and a bit naughty- without being disgusting or graphic. The book explores questions about genius, the importance of love, and the ability to be redeemed without giving us a prefab answer. It is an excellent selection for a book group, or a rainy April afternoon by the fire, with a little Simon and Garfunkel in the background.

Do You Like Frank Lloyd Wright's Style of Architecture?