Four of my college friends lived together in apartment number eleven-ten, and more than once other friends would refer to them as a crew. And they were a crew: a Navy vet, two guys who had worked for a couple of years before college, and a life-of-the-party guy. What they had in common was that they were a little older than the average college student, which in their case meant only that they had had more practice at having fun. One story illustrates their skill at combining dumb luck – and I do mean DUMB luck – and what can best be euphemistically called a carpe diem attitude.

One fine spring day, too fine a day to sit in class, they were out in the hills surrounding the campus, fishing for trout. None of them caught a single trout all day. They were on a dirt road trudging back to their truck when another truck came their way, flushed some ruffed grouse hiding roadside, and incidentally bumped and stunned the birds just as they were getting on their wings. My friends all looked at each other for a second and then without a word between them they all ran up to the dazed birds, with fishing rods in hand. Thwip, thwip, thwip! Go trout fishing, come back with ruffed grouse. Close enough.

Then, a half year later, one fine fall day, too fine a day to sit in class, they were in the hills surrounding the campus, hunting for ruffed grouse. They hunted all day but didn’t bag a single grouse. They were walking back to their truck, crossing a stream, stepping from rock to rock, when they looked down and saw . . . trout! BAM, BAM, BAM! Go grouse hunting, come back with trout. Close enough.

Say what you will, but it was a fun apartment. You truly never knew what you’d be walking into.

By the way, only one of the four ever graduated.

Exactly what do some of us learn at college? 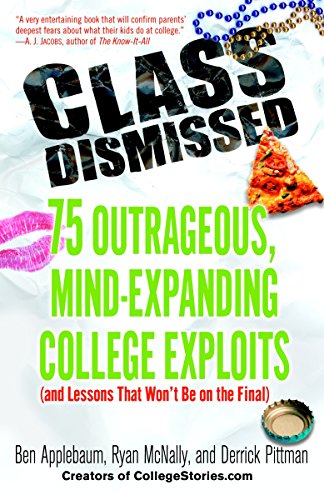 Class Dismissed: 75 Outrageous, Mind-Expanding College Exploits (and Lessons That Won't Be on the Final)
Buy Now