The Gift of the Magi

William Sydney Porter, better known by his literary name, O. Henry is described as a prolific American short-story writer. He began writing in 1898 while being imprisoned for supposedly embezzling bank funds (Biography.com , 2011). Many of O. Henry’s stories reveal a twist of plot, which turns on an ironic or coincidental circumstance. His writing is often compared to the popular 19th Century French writer, Guy De Maupassant. Both wrote stories with plot twists and surprise endings, although O. Henry’s were more lighthearted. His stories frequently describe the lower class and middle class people living in New York City. Perhaps one of his most popular stories is The Gift of the Magi . This story illustrates the challenges of a young couple who wish to surprise each other with a secret Christmas gift, but have very little money to spend. It is an emotional story with a moral lesson about gift-giving. The story has been a popular one for adaptation, and is a recurring theme, especially during the Christmas season. The theme of The Gift of the Magi is “self-sacrificing love”. Both the husband and wife give up their most prized possessions in order to provide a special gift to their loved one. The theme will further be explored by examining the plot and the setting of the story.

The opening paragraphs to The Gift of the Magi reveals the protagonist’s dissatisfaction with the amount of money she possesses for buying a Christmas gift for her husband, Jim. The author references the great lengths at which Della attempts to scrimp and save money in order to buy something truly special for Jim. She puts her reputation at risk by bartering prices with the grocers to the point which are considered almost criminal. “Pennies saved one and two at a time by bulldozing the grocer and the vegetable man and the butcher until one's cheeks burned with the silent imputation of parsimony that such close dealing implied” (Clugston, R.W. (2010) 5.4). This is the first time the author suggests the character makes sacrifices to reach her goal. The plot takes a drastic turn when she suddenly realizes a magnificent solution to her problem. She collects herself and expeditiously sets out to sell her hair. She briefly considers the consequences of her actions, but disregards them, as she is determined to obtain the grandest gift for her husband. This is what is most important to her, to show her love by presenting the most wonderful gift money can buy

The story takes place on the eve of Christmas Day. Della, a young wife, awaits the arrival of her dear husband. She stands in their humble apartment, contemplating her dilemma. How will she afford a gift she feels her husband so deserves? This is the setting of The Gift of the Magi. O. Henry further elaborates the financial situation of the young couple.

“The "Dillingham" had been flung to the breeze during a former period of prosperitywhen its possessor was being paid $30 per week. Now, when the income was shrunk to $20, though, they were thinking seriously of contracting to a modest and unassumingD. Twenty dollars a week doesn't go far. Expenses had been greater than she had calculated” (Clugston, R.W. (2010) 5.4).

The setting establishes the condition of their absence of funds and the desperation which Della experiences with the inevitable approach of Christmas Day. The setting “puts boundaries around the action and defines the environment in which conflicts can be witnessed and character development observed” (Clugston, R.W. (2010) 6.1). The environment in which Della and Jim live, directly effects their decision to give up what is most important to them, signifying the strength of their love.

Author, O. Henry catches the attention of the reader through plot twists and a surprise ending in The Gift of the Magi. The story predominantly focuses on the character, Della who is determined to purchase the ideal gift for her beloved husband. The plot begins immediately with the discovery of Della’s predicament and the previous actions she has taken in order to reach her goal, but to no avail. The narrative changes direction when she has an epiphany, to sell her most valued possession, her hair. Additionally, the setting of the story illustrates the financial status of the young couple and the hardship which is endured after their income is significantly reduced. Furthermore, Della’s desire to present a Christmas gift, comparable to her love, necessitates her actions. In the end, it is both Della and Jim who ultimately surrender their most cherished items to present one another a token of their affection. The theme of “self-sacrificing love” is evident in The Gift of the Magi. The plot and setting greatly influence the motivation of the characters and final outcome of self-sacrifice. 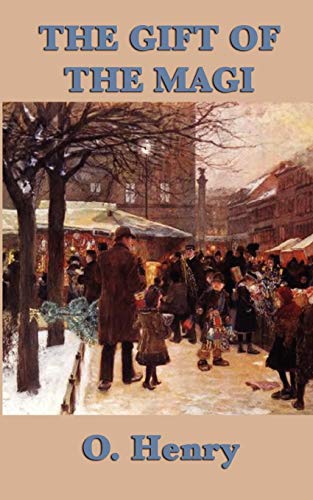 The Gift of the Magi
Buy Now