From a lecture by Dr. Nakey: The simplest way to think of time-travelling is this: time-lines follow gravity wells. Because of this it is really difficult to predict when or where any individual time-line will intersect with itself. The moon and earth form intertwined paths that do not circle each other, but weave in and out when looked at from above their path about the sun, like a braided bracelet. The planets and sun likewise form intertwined paths as the sun rotates out through the spiral arm of the galaxy. The stars of the galaxy likewise form intertwined threads in the galaxies, galaxies form intertwined threads in the universe, and the universe forms an intertwined path of threads with itself as it bends in response to the stresses and strains caused by the never-ending motion of the space-time continuum. It is difficult to tell when any given thread touches itself in the resulting tangle. The effect is best pondered while quickly eating a vanilla chocolate swirl ice-cream cone. The resulting brain-freeze will quickly bring you back to some sense of painful normalcy.

After leaving North Chicago, the first friend the boy encountered claimed that he wanted to grow up to be a stalker. Both were in their Junior High School band. The stalker spoke of predator and prey, the thrill of the hunt, and his ability to silently follow the game he hunted while remaining unnoticed. It was close to a one mile walk to the school they attended, and the stalker would practice his tracking technique by attempting to walk lock-step with the boy, so closely that he would step on the heels of the boys shoes. This continued until the boy (much shorter than the stalker) had had enough. One day, he turned and punched the much bigger and taller stalker in the nose, which turned out to not be a smart thing to do. That ended that so-called friendship, but did not end the stalking. 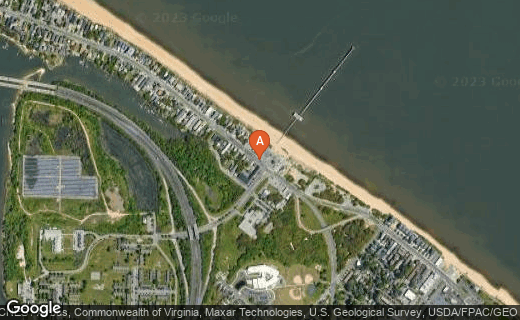 they fished from the pier, took fishing boats into the bay, spent time on the beach, and picnicked

The grandparents and friends they knew came down one summer to spend a week or two at the beaches in Norfolk. The northern part of Ocean View connects to Willoughby Spit. Willoughby Spit is a mile long peninsula that was formed during a hurricane earlier in the century, and that remains to this day. The grandparents and their friends drove to town separately, the friends in a new purple car. Finding a cottage to rent within walking distance of Harrison’s pier, they fished from the pier, took fishing boats into the bay, spent time on the beach, and picnicked. This was memorable for the boy because of new found friends and for a picnic where he found out the hard way that he did not take too well to eating crabs.

During this decade, the 1970s, the grandparents went on vacation to Hawaii. This event was made memorable by a picture they brought back. Strange, but true, the picture was torn in half. A part of the picture missing, and the grandmother made a point of telling the boy he should keep the picture. I made note of this, wondering what would be seen in the other part of the picture. We had been taught that this sort of practice was a Second Millennium technique used to provide proof of identity for folks who were expected to meet later in their lifetime. Bring the two pieces of the picture together, and the holder of each piece would instantly recognize that they had something in common with the other.

The boy took a History class and the stalker was in it too. One day the teacher asked the question ‘What will you do with your life?’ The stalker spoke up and said ‘Propaganda is powerful stuff’ and that he aspired to be another Hitler.

Another spoke up and said she wanted to be in government, not as a representative, but as one of the people who helped get supplies to troops. She called it logistics, and eventually grew up to do just that. It would turn out that she and the stalker would continue to be in touch for decades after high school, as if he had chosen to stalk her. People are strange, almost stranger than fiction.

The boy spoke up and said he wanted to make things that could tell where other things were and where they were going.

Another time, the students in the class were talking about a friend of theirs who was trying to sell drugs in a nearby neighborhood, not his own. Since the boy had already encountered some of the viciousness that were associated with drug-dealing back in the 1960’s, he foolishly spoke up with the warning that the dealer should not do that in other people's neighborhoods since he might get himself killed. A couple of days later, the dealer WAS killed while not in his own neighborhood. Everyone in that class seemed to assume the boy was involved in it. But the boy knew nothing other than the patterns and behaviors associated with people who choose drug dealing as their way of life. In the 1960’s and 1970’s, North Chicago and Washington, D.C. were not the safest of places for those actually raised there. Some of these patterns of behavior were the same in other cities, as if the methods for conducting such business were originating from the same teacher and being spread to the other cities. The patterns were recognizable to a child who had lived in many cities, even when they were not yet recognizable to each individual city's police force.

Looking Back At the Weathermen

The video was put together by an 8th grade student, presumably studying history. Posted in 2010.

Because of the boy’s interest in mathematics, physics and the newfangled calculators, the grandfather made arrangements for the boy to visit with the people who ran one of the more modern computers available in the DC area. This 1970s era computer was not housed at any of the agencies you might first suspect. Instead it was run by a bunch of meteorologists, the true weathermen, not to be confused with the radical weathermen group of Chicago.

The boy visited and was duly impressed by the size and complexity of the computer they had. It took up one full floor of an environmentally controlled building. The boy was allowed to see it, and was allowed to take home pictures it processed from satellites as souvenirs. This got him in trouble again. Imagine taking those pictures into a high school class for show and tell in the 1970s, and saying he got them from the weathermen. Also, back then, no one believed that pictures could come from satellites. Also, everyone knew the weathermen were radicals, so that must mean the boy was a radical too. Foo! The boy learned the hard way that people hear what they want to hear.

Even though he got in trouble, the visit served to encourage the boy to learn as much as he possibly could about mathematics and physics while his education was free. This set him up well for college.

The boy of course chose to continue his study of mathematics. He sought to understand not only mathematics, but how to apply mathematics to problems of physics. (Given my origins, I could certainly help with that). The focused efforts in high school were rewarded when the boy did not have to take college calculus or study a foreign language. Instead he passed tests that allowed the university to waive the requirement to take those classes before entering the more advanced mathematics classes. He ended up graduating after only three years of study in mathematics and physics. An even more talented classmate went on to teach university level astrophysics at MIT.

All these events in the 60’s and 70’s were to become undercurrent themes as the boy grew into a man. The vacationer, the stalker, the lady with the purple car, the dead drug dealer, and the weathermen, all were threads tangled in the fabric of time.