Certainly one of the most delightful and wonderful books which I have myself had the honor to read, A Sailor of Austria, follows the tale of an Austro-Hungarian submariner. Unfortunately for our dear hero Otto Prohaska, he has to ply his trade in war in areas other than just on the sea, such as when he is accused of sinking a German submarine and volunteered to go serve with the Austro-Hungarian air service, on the Italian front. There, throughout the storm-tossed years of 1916, Otto Pohaska is to serve his empire, not in a submarine, but in the perhaps even more dangerous role of a pilot and flight commander: alongside him are a host of characters ranging from a former Hungarian monk, to pan-German nationalists, to his Hungarian countess wife, to a pettifogging bureaucrat, all in the mad world of the Great War, bound together in the great, insane, horrifying, adventure, as recounted in The Two-Headed Eagle: In which Otto Prohaska takes a break as the Habsburg Empire's leading U-Boat ace and does something even more thanklessly dangerous, by John Biggins.

I have a glowingly good impression of A Sailor of Austria, the Two-Headed Eagle deserves all of the praise which its predecessor was showered on, and the judgement I passed on Otto Prohaska as he prowled the sea adumbrates all of the joy which I found within this book.The Two-Headed Eagle contains all of the wit, the dry sense of humor, the irony, the attention to detail, the care, the beautiful writing and descriptions, the authentic and ever-so-diverse characters, adventure, scope, ambition, moving emotions, sadness, grief, inspiration, the product of an extraordinarily talented writer who gives birth to such a rousing and grand adventure book. To soar above the front in a flimsy canvas plane, devilish escapades to rescue condemned prisoners, escape through the alpine snows: there is such a grand panoply of events as to stun the reader, as our thaumaturge manages to rescue himself from his perilous situations with such constant ingenuity, bravery, and wit.

And yet the book also strikes me as painting an altogether more grim picture than A Sailor of Austria did. Perhaps it is the region, being over the front on land, but there is no equivalent to the almost idyllic coastal patrol voyages in the Adriatic, comparable more to a touristic jaunt than to a battle, and nor the sunny upland meadows of Hungary and its intensity of expression of love. Certainly, not everything is sad and gloom, and there are parts of A Sailor of Austria which can match anything found in The Two-Headed Eagle for their sadness and misery, but the horrors of war are even more clearly and starkly expressed, and the book bears an imprint of tragedy and grief about it which is unshakable. It is a testament to the genius of Biggins that he manages to plumb the depths of such incredibly agony with moments of laughter and amusement, often following on each other in staccato speed, fulgurant waves of despair succeeded by mirth. Laughter always haunted by the war... what a magnificent tapestry that he has created, one so desolate but which still leaves the sprouts of hope and humanity to emerge from a fecund soil.

Being a book written from a narrative view of a man recounting his memories long after the events told within had already transpired, this taste for tragedy can fully express itself with the knowledge of what happened to the people within: of a woman clad in black searching forever for news of her fiancee shot down in the alps, of the wretched poverty of a former hero, of the courageous death of men before evil and terror. One can even feel some sense of sympathy and understanding for those that we grow to despise within the pages, about a man brilliant at devising train schedules and never good at questioning what their intent was for. And of course, for those who have read A Sailor of Austria, throughout there overshadows the knowledge of what happens to Otto Prohaska himself and those he loves, this sword of Damocles that obscures our vision and lies poised with sadness and misery over even those brief respites from the horror of war. It bespeaks a narrative device used to its fullest power, one which wrenches at the heart and which makes it into a book so much more profound and stirring than it would otherwise be.

In this, it might reflect one of the few qualms which I can find with the book, in that sometimes it can seem a bit suspiciously too pat or, if not contrived, then at the least pushing the envelope of what is believable. Consider the conversation which plays itself out between Otto, Toth, and an Austro-Hungarian stormtrooper after he "rescues" them when their aircraft crashes into no-man's land between the Italian and Austro-Hungarian positions. Within seconds of their meeting, it quickly becomes a topic of near-philosophical nature on war, violence, and meaning. To me at least, it felt like something which was inserted by the author to propound upon how bad the war was, rather than something organic and naturally developing. Throughout the book, the same element is at play: events of exceptionally narrow chance take place to wrap up ends and provide for desired outcomes. Normally it is so well done that it doesn't matter, and the cheerful pushing of the envelope of the feasible makes it all the more entertaining, but at times, like in this strange and sudden conversation among the trench holes of the front after a grenade nearly has killed our hero and his pilot, it changes from the elegant and sophisticated to the obvious and staged. So too, it foreshadows quite purposefully the horror of the Second World War, filled with crazed German pan-nationalists and references to the tragedies that will unfold some twenty five years later, in a way which can come off as altogether too neat at times.

But one has to admire the elegance and profoundness which expresses itself across the pages, and I genuinely do feel that the characters who speak do so authentically - perhaps at times, the thoughts they speak might be shepherded along by the author, but the passionate responses to the war, the pettifogging bureaucrats, the bursts of anger, the love and joy and sadness, all of this seems eminently real. The war ruins as the central thread throughout the book, even if the brilliance of the author can sometimes distract the mind from it, can make it seem something more than just the brutal slugging match of shells fired on lunar landscapes, while at the same time magnifying it to all of its tremendous horror, devastation, and loss. It is a curious blend, but one which the author blends expertly together.

It is also a genius which, in addition to its ability to express itself in its lofty discussions of the meaning of the war, of peace, of humanity, has an incredible attention to detail and historical accuracy. Not being a student of the German language, one can still be impressed by the loyal renderings of the abbreviations used for the lengthy German titles of Austro-Hungarian officers, and similarly not having studied Italian the author's dexterity in regards to clever comments and quotes which simply work with the language and express itself so well. An intimate understanding too is furnished upon the machines that Otto Prohaska flies, and on the geography, and all of this illuminated with splendid descriptions of the highest calibre: one truly feels oneself to be accompanying brave men in their wicker and fabric machines into the shell-shook air over Northern Italy in those trying days of 1916.

I had heard of the Sailor of Austria series as a splendid historical fiction novel of the First World War, and in this regards, The Two-Headed Eagle continues to hold high the standards which John Biggins has provided in his previous events. Truly, one feels that at time one is reading a non-fiction recounting of the war, so complete and accurate the book is, its papers brimming with authenticity and assurance. And yet it is this passionate, zany, heart-wrenching story which makes it into such an incredible, awe-inspiring fusion, which makes it into a masterpiece: for anybody who loves an adventure story, for everybody whose heart weeps with tears at the folly of war, who laughs at the absurdity of existence, whose soul leaps at love and hope, The Two-Headed Eagle is one which will grab ahold of you, and not let you go until you have raced through its pages like an airplane traversing the egg-shell blue sky.

5 stars for The Two-Headed Eagle 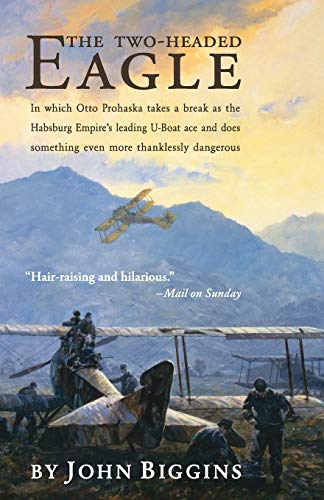 The Two-Headed Eagle: In Which Otto Prohaska Takes A Break As The Habsburg Empire's Leading U-Boat Ace And Does Something Even More Thanklessly Dangerous (The Otto Prohaska Novels)
Buy Now