Book Review: The Woman In Black

Folks who know me well enough, know that my tastes in literature run to Sci-Fi, Mystery and Crime Drama, Fantasy and the occasional inspirational book. Spook fiction just isn't on my list of preferences. However, if I'm a fan of an author and find a book they've written outside of what I'd rather read, I'll give it a go. I'm glad I did with Susan Hill's novel, The Woman in Black.

From the beginning of this tale of the ghastly sort, the unremarkable heralds that which is remarkable. A man reflecting on the joy he takes in the scents and sounds of the outdoors reveals to the reader he has layers of feeling to his appreciation nature. This highlights the authors skill at using the ordinary to veil that which is disturbingly not in keeping with the ordinary.

Having thus drawn the reader in and further tightened the reins, Susan Hill goes on to tell an exquisite tale of haunting and that which is a curse. As I outline below, she doesn't miss any of the earmarks of fine ghostly story-telling. The spices and ingredients are sprinkled on lightly or slathered on as needed to complete the dish she serves up.

The story is well paced - slow where needed and quicker as the tale demands - not unlike a nice ride in horse drawn carriage on anything but a sunny day. I was particularly pleased with the depth and crafting of the characters. From the first page, I found every scene, every event believable and had no need to suspend disbelief in order to enjoy the story.

I marvel at how something which is mundane and unassuming can be placed in just the right light to induce fear into the heart of the reader. The scenes in the nursery and that annoying rocking chair gave me the greatest jolt as I encountered them. Children overlooking a funeral through the graveyard fence wouldn't raise any question other than why they're not in school. The first mention was almost missed. It's the subsequent mentions that drove the terror with it's underlying implication.

We all have heard the phrase psycho b*@ch. When said woman is dead and insane the phrase takes on a whole new meaning. Just to highlight the skill of the author, early in the story when we meet our ghost we're encouraged to be sympathetic in the way she's presented, but even then there's an undercurrent of creepiness that suggests all is not copacetic.

Whether you're thinking on selections for Halloween reading or are a regular reader of the ghastlier leanings of literature, I recommend this book highly.

Do you like to read spine-tingling, hair-raising and suspense-filled ghost stories?

Susan Hill's, The Woman in Black, isn't of a book genre I would normally read as a preference, though I've read a few. Because it is a book by Susan Hill, I picked it up and read it anyway. Being a fan of Hill's dark crime fiction, I am in love with her detective, Simon Serrailler. That her books don't necessarily end with fairy tale bliss is a plus for enjoyment of her books. Shadow shrouds her writing style and suspense guides her pen. I was on the edge of my seat, so to speak, as I read her ghost story of superior caliber.

After reading the book, I asked myself, "What was so dang scary?"

I think the the experience is not unlike waiting for the snap of the rubber band which is stretched and then released. Waiting for the other shoe to drop comes to mind. Arthur Kipps' trek up the stairs to the walled off room is an excellent example. He dares to go out into the night to retrieve an ax then back in to accomplish the goal of breaking down the barrier. Only, he finds when he gets back that the door was wide open.

This is not an unusual thing to find a door open. However, when you dress it in strange noises and then reel out the atmosphere slowly, a door being open takes on a whole other meaning. It's ability to scare the bejesus out of a person is even more plausible. Then there is spider.

The music in a movie or stage play or even an opera can pull at the emotional tether lines of an individual like the strings of a marionette. This is where Spider comes in to the story. It's the reactions of this little pooch to those forces around him which in turn strikes fear in the heart of the reader. Susan Hill employs this effective puppeteer more than a little effectively.

Turning each page almost before reaching the end, I read this book in one sitting. At first, dismayed by the page count of 176, I almost set the book aside in favor of another. However, I realize now that I made the better choice.

Test Your Knowledge of Fictional Ghosts and Ghost Stories

The Woman in Black ~ Kindle 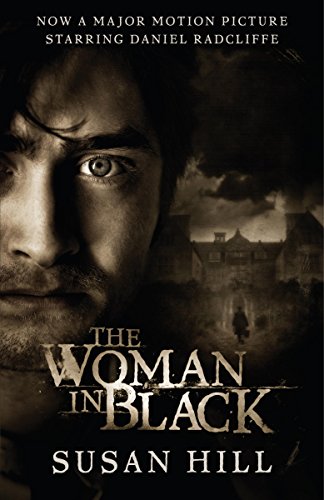 The Woman in Black: A Ghost Story
Buy Now

Some Necessary Elements of Spook Fiction.

For those readers who can't help but make sure the author didn't miss the formalities and social niceties of a true ghost story, let's take a look at those elements of quality spook fiction that point to Susan Hill's well crafted tale. The things I like best in a ghost story and which are found in many of the more successful ectoplasmic tales on offer are listed below with an example of that found in the book.

Atmosphere: Nothing is more ominous than silence. In The Woman in Black, we have the citizenry of Crithin Gifford who are on one hand friendly, open and hospitable to a fault. However, on the subject of the late Alice Dablow and her home, Eel Marsh House, they become more silent than the blackest night and close ranks. There's no prying their lips open on the subject. Arthur Kipps is kept an outsider in this way.

Weather: Rain, fog, mist, ominous clouds are weather elements which work well to set tone and mood for the story. The unpredictable mists which appear and obscure reality are well used by Hill in the tale of tragic loss. The wild storm in one of the scenes which crops up and shakes the mansion to its very foundations stokes the fire of fear in the reader. Remember, " ... 'twas a dark and stormy night ...."

Specific Time and Date: Though the reader is provided with the month and day in places, we are never given an exact year. That's not a problem because of the clues the author slips in from time to time which help one to have a temporal bearing on the story. One such nibble is the fact that the story is set in England after the invention of the car and before the cessation of the use of the horse and buggy. The bicycle has also been invented.

Induced Fear and Suspense: This is a no-brainer. However, the most scary of moments in goose-flesh barding are those when the tension is understated. "... I had the impression of someone who had just that very second before gone past me ...." How scary is that? Understated as it is, it is darn unnerving. [Quote from The Woman in Black, page 126, Vintage Books 1983.]

A Hint of Mystery: It's never a bad thing to keep the reader guessing. Keep the reader wanting to know the backstory. Dole it out judiciously and always make it clear there's still a bit more as the reader journeys through the mist which is your story. The appearance of the woman early on in the story does just that.

Surprise: I like to call this the boo factor. This occurred for me in the book when Arthur Kipps makes his final visit to the nursery. The sight that met his eyes said, "BOO!" loud and clear.

Gothic Tone: Shadowy grave yards and old places of worship set a pretty Gothic atmosphere. Throw in near-darkness which falls during the daytime hours and a pervading undercurrent of fear and sadness, and you've got Gothic in spades. The sightings of the woman are usually in the graveyard withing sight of a church. When they aren't something ghastly is afoot.

Death: I suppose one could write about a person who though living takes on the characteristics of a shade. Typically, ghosts assume the role by stepping over death's threshold. Even with the first sighting of Jennet Humfrye, there was always the touch of death about her.

Did you notice I mentioned nothing of horror or horrific deeds? Blood and gore don't make the ghost story. Subtlety, finesse, and clever revelation do. I can most certainly say, with no deliberation, I'll not look at a rocking chair the same way again.

I discuss setting a spooking scene further on Jaquo.

Film Clip from the Movie

The Woman in Black
Buy Now

The Woman in Black

For visitors to this article who don't do paperback, kindle or dvd's, there's a version available for Nook. This film clip sold me on the movie, which I have yet to see.

It's my habit to Google a book I'm about to read. Lay a bit of foundation and get a feel for what I'm getting into. I was pleased to learn about the performance history of the book. The sweetest surprise, of course, was to learn that Daniel Radcliffe was in the role of the main character in a new movie. Daniel Radcliffe has my vote. Any actor pull off the role of Alan Strang has enough moxie to do well as an actor.

What a good writer has to drive a good ghost story, the movie industry has in spades to do even better with visual effects, sound and clever staging.Though I've not seen the movie, the clips are enough of a warning to not watch them at night over a bowl of popcorn. At least for me. I like my ectoplasmic encounters to be rather impotent when I'm the viewer.