A Driving Tour of the Northeastern USA

A Little Music To Set The Mood

There are six New England states that comprise the area we refer to as the Northeastern States are unique in their geographical location and include some of the only states named for non-geographical reasons:

In larger states, drivers can go for hours and still be in their home state, or even within the same county. In the Northeast, when travelers drive for hours, not only will they drive right out of the state, they're liable to drive into two or three state within half a day's time! This beneficial aspect allows one to experience the unique cultural identity of the Northeast, while sampling the regional characteristics that make each state so uniquely different. Granted, it takes a closer examination than usual to see the differences between a few states that, at first glace, appear to flow seamlessly from one to another.

To take a drive or hike, or both, through a beautiful and natural area, is a less explored option in our fast-paced world. This is exactly the appeal of doing so: to slow down and enjoy, to smell the fresh air, smile and talk with another on the trail, watch the birds and tree creatures scamper about while the sunlight streams through the trees. When one is in too much of a rush, these things are lost in the blur of life. If visitors start out in the Northeastern states, they will find no end to the sampling of Mother Nature's bounty.

Starting out, the trip began in Vermont, the land of trees. The state of Vermont is named appropriately. In French, "ver" means green and "mont" means mountain. Though this state is filled with green trees, they turn to beautiful shades of orange and red in the fall. A driving tour of this area will lead you down winding roads, around the bends, into small towns and through a land of trees. One of the best times to see these beautiful living creatures is at the change of seasons. The fall foliage changes color best typically during the first two weeks of October.

After Vermont, it was off to see New Hampshire. While stopping to fuel up, there was the traditional Northeastern maple syrup for sale. But, this time, the maple syrup was made by one ambitious young man by the name of Ben Flsk, the owner of Ben's Sugar Shack. The interesting thing about Fisk's business is that he started it at age 5 years old, after seeing another maple-syrup producer on a pre-school fieldtrip. Now, at age 23 years, Ben Fisk is a successful businessman, with five employees and a growing maple syrup market sells his products in 90 locations throughout New Hampshire and Massachusetts. To try Fisk's maple syrup, find his products sold online. In our difficult financial times, it's heartening to see the success of the next generation. There are glimpses of golden rays of inspiration when we slow down enough to notice.

Unusual Findings in the Northeastern States

Continuing our drive through New Hampshire, we paused to view the former place of the "Old Man of the Mountain" (may he rest in peace). Located just off the interstate, we parked (free) and began the short hike - a ten minute trail - that began with a slight ascent and carried on upon a level and paved walkway. At the end of the walk, we ended up at a majestic watering hole adjacent to the viewing site. Just above this small lake is the cliff face of a mountain, where the Old Man's face once could be seen. His face fell down many years ago. However, through the marriage of art and science, a user friendly platform allows all visitors to "see" the Old Man once again upon the mountain-front, by means of lining one's body up with an artistic interpretation juxtaposed against the backdrop of the mountain. This works with any sized individual. My seven year old saw it as easily as my five foot nine inch teenage son.

A few days later, we carried on into Maine, seeing the shores of cold Northern waters that are the home of the lobsters the rest of the country enjoys during the holidays. We swooped downward thereafter to good Old Boston town, the birthplace of the Revolution and where the same trees witnessed the ride of Paul Revere in Massachusetts. We swung east to Rhode Island before driving on to Connecticut... the birthplace of John Mayer. Did you know the state song of Connecticut is Yankee Doodle Dandy? Listen to this song by hitting play in the above right video. While originally a song composed by British to make fun of Americans, it was quickly adopted by Americans as their own.

See States of the Northeast In New Perspective

Well, that's the very point of going to the Northeast. It's not to go to something but to get away from where you're at. In the process on doing just such an ambitious undertaking as getting away from it all, you may come to realize the gift you are given in the simplistic beauty and serenity offered by our Northern friends. 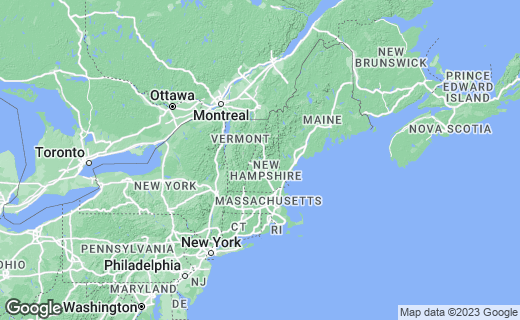 Did You Find This Article "A Driving Tour of the Northeast USA" Helpful?

Learn more about John Mayer, the singer from Connecticut, click on this link:
What Is Granuloma? John Mayer's Diagnosis