A fictional race created by UK author Storm Constantine, the Wraeththu (ray-thoo) are a hermaphrodic post-human species whose existence in a wild, post-apocalyptic world theorizes not only what our next stage of evolution as a species might be like, but also what effect such a large-scale evolution might have on those who can’t (or refuse to) evolve.

Originally appearing in Storm Constantine’s novel Enchantments of Flesh and Spirit in 1987 (and appearing in new novels and contributions making their appearance with steadily more regularity ever since,) the Wraeththu are elegantly detailed in fiction written by authors both in the US and the UK. Also known by the shorter label “har” or “hara”, which is often used to give certain words (like the word “someone”) a more Wraeththu-centric flair (“somehar”), these beings stem from a central or singular god-like figure known as the Aghama. Though different tribes of Wraeththu have different views as to exactly what the Aghama looks like (some are more fearsome and beastly than others) much of Wraeththu fiction indicates that the har from which the legend springs was just an ordinary Wraeththu, one who walks among the heirs of his legacy, unknown to anyone but himself. 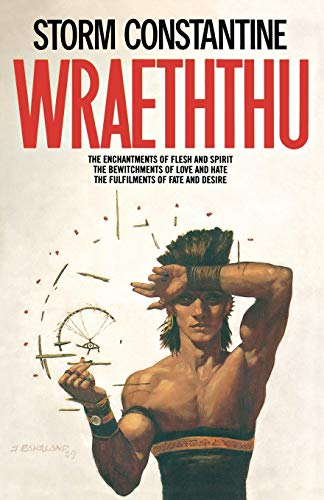 Wraeththu: The Enchantments of Flesh and Spirit, The Bewitchments of Love and Hate, The Fulfilments of Fate and Desire
Buy Now

Classically, the future-time setting of the Wraeththu novels and stories has necessitated its placement into the genre of Science Fiction, but enough fantastic elements (magic, societal organization, etc.) and horror elements (voodoo-like curses, the inception of new humans into the genepool of the Wraeththu through an almost vampire-like mixing of blood, etc.) are present in the series to give it a certain sort of surreal or intergenre appeal. More recently, with the appearance of a number of new “punk” subgenres, elements of Steampunk and, to a greater degree, Tribalpunk, have been recognized by fans and offered as reasons for the series’ inclusion into those classifications as well.

The Wraeththu are also not exclusively isolated to the realm of written fiction. Though a number of fans have constructed everything from resources for the Wraeththu RPG to instructions on how to LARP the settings provided by the original fiction, perhaps the most interesting way in which Storm Constantine’s Wraeththu bleed into the fabric of reality can be seen in the use of Wraeththu elements, deities and rituals as an extension of Chaos Magic. Storm Constantine’s Grimoire Dehara, the first tome of Wraeththu magic to be written and released to the public as a resource for spiritual growth, is foremost among the sources for information pertaining to the practice of Wraeththu spirituality. Though it is not meant to be a primer for a new cult, the foundational document of a stand-alone religion with origins in fiction (like Hubbard’s Scientology) or anything else exclusionary (like the one true path to god, etc.) the Grimoire Dehara is written with a certain amount of true and genuine spiritual exploration and experimentation in mind. As an extension of Chaos Magic (or perhaps a better analogy would be a program meant to be run through the computer of spirituality) the Wraeththu magic presented in the Grimoire Dehara presents itself merely as another path to be borrowed from or explored on one’s journey to the same spiritual horizon that all traditions ultimately lead to.

In the elegant prose and poetic language of Storm Constantine, the angelic post-human Wraeththu are given beautiful and stunning life in a way that few other fictional races of any genre are ever graced with. As creatures, they are as unique as the stories into which they have been woven, and defy convention and genre with the same skill that the novels from which they were first born still do.