For Your Reading Pleasure: The Goldfinch

The Goldfinch: A Novel (Pulitzer Prize for Fiction)
Buy Now

I'm on a quest to read as many Pulitzer-prize-winning novels as possible. I've read several at this point: some of exceptional quality, a few of questionable merit. The former usually win out, but at times I find myself disappointed with the selection.

The Goldfinch by Donna Tartt was one of those disappointments: the writing superb; the characters and their motivations baffling.

The protagonist of The Goldfinch, Theo, has a compelling story: a pre-teen boy who has survived a (possible) terrorist bombing of a New York museum in which his mother is killed. Terrified and surrounded by death and destruction the child, at the behest of a dying man, clings to a small and beautiful 17th century painting of a goldfinch chained to its perch (a real masterpiece painted in the last year of his life by Carel Fabritius (1622-1654)), beloved of his mother.

Following his mother death, rejected by his paternal grandparents as a ward, Theo is fostered by an aloof New York family-of-means until his absentee father can be found. Once the father comes on the scene, Theo is whisked away to the foreign and superficial world of Las Vegas where the boy sinks into a chemically-induced party world before finally escaping back to New York to live with an antiques dealer who happens to be the partner of the man who urged Theo to take the goldfinch painting from the rubble of the bombing. All this while, Theo has kept the painting, hidden.

The book itself is huge: 2" thick, 771 pages of text. The cover is eye-catching (and, once the story is revealed, quite appropriate for the tale).

Told in an intimate first-person narrative, the book promises insight and feeling which are never delivered. The secondary characters are two-dimensional (especially Theo's deadbeat dad, the father's bimbo girlfriend, and even Theo's best friend Boris, who is so stereotypically "Russian" as to be laughable). Why Theo keeps the painting, even as he learns the penalties he will face if caught, is unclear - he rarely thinks about the work of art and looks at it even less. He never quite seems to find his moral compass in life - which may be realistic and expected, given the boy's history, but is ultimately disappointing.

Although I have not yet read The Secret History, I understand it is a superior book to The Goldfinch. 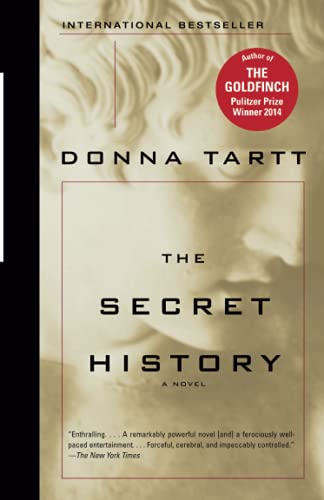 What do you think about The Goldfinch?