For Your Reading Pleasure: Jonathan Strange and Mr Norrell

Just in time for the debut of the BBC TV Series, here is a review of Jonathan Strange and Mr. Norrell by Susanna Clarke -- a dark story of magic and mischief set in England in 1808.

The book is not for the faint of heart. It is a long novel, meticulously researched and written in the luxurious prose of the early 19th century (even though Ms. Clarke is a contemporary writer). Its charm resides in this slow and methodical measure, where every detail is important and every humorous note shines through.

This is a story of magic, fantasy, and rivalry interwoven with historical figures and actual events. Reading Jonathan Strange and Mr. Norrell is like strolling through a vast English woods on a spring day when, slowly, the sky darkens and the day turns foreboding and sinister, sending the stroller on a footrace to the end.

Although some of the magical references are similar to Harry Potter (due in large part to the rich English folklore that inspired both J.K. Rowling and Ms. Clarke), do not be fooled. This is no young adult fantasy, but treacherous human (and otherworld) nature exposed. Jonathan Strange and Mr. Norrell is a fantastic book.

Mr. Norrell is a fussy, middle-aged bachelor who just happens to be a "practical magician": a magician not for hire to entertain, but rather one who commands the craft in extraordinary ways. He has devoted his life to the pursuit of magic and the elevation of his craft in the polite society of London. Hailing from the quiet countryside of Yorkshire, the reclusive bookworm spends much of his time scrutinizing, devouring and fiercely guarding the secrets contained in his massive library of magical books. His visits to London are rare and grudgingly conducted, but he cannot resist the high-level demand for his skill and the resultant elevation to the upper-class drawing rooms of the capital city. While his vanity propels him to dabble in this rarified society, his mistrust and reclusive tendencies usually send him fleeing back to Yorkshire to hide among his books.

Enter Jonathan Strange, a young well-connected nobleman who, though not devoted to the craft of magic, is naturally good at it.

At the urging of the British peers, Mr. Norrell reluctantly takes Jonathan Strange on as a pupil, doling out magical tidbits as any miser would. Jonathan quickly masters all that Mr. Norrell imparts and, knowing that the older gentlemen still keeps much from him, ultimately emerges from the shadow of his tutor to expand the use of his newly acquired craft. The sorcerer's apprentice graduates. The sorcerer is not happy.

Although Jonathan Strange and Mr. Norrell could easily have settled for being a tale of ambition and rivalry, instead it is an extraordinary period piece that weaves the history of the Napoleonic era, English drawing room comedies, and the rich folklore of the island into a fascinating narrative. It is both complex and realistic in its portrayal of the motivations of men and faeries (from whom humans have, over the ages, acquired their magic). Neither form of being is exempt from ambition or personal agenda.

Magic looms large in both mendacity and spectacle. The application of magic is treated like any other skill. The study is tedious; when the magicians apply their craft, it is without fanfare and is not described so as to induce awe. However, the illusions are indeed awe-inspiring. For example, in one feat the two magicians create (while still in concert with one another) an 11-day blockade of French ports through the use of rain, thus stalling the French army to Britain's advantage. There is no wand-waving and the magic is described with precision and purpose (in keeping with Mr. Norrell's demeanor and the tenor of novels of the time), but such treatment of the subject only lends to its credibility on an incredible scale.

The novel's historical feel is augmented by footnotes (which are hysterically dry and witty). It is through these footnotes that much of the magical lore of England is conveyed, including the story of The Raven King, John Uskglass -- the mortal who first learned magic from the faeries, ultimately leading them, then defying them and bringing the craft to humans.

What Makes It a 5-Star Read

Jonathan Strange and Mr. Norrell is a meticulously crafted novel that meanders, seemingly without plot, for the first several hundred pages, setting the tone and the stage for the thrilling ride that is the latter half of the novel. If you want a fast-paced adventure that captures your attention from the first page, this is not the novel for you. The reader must be prepared to "study" the lives of Mr. Strange and Mr. Norrell in much the same manner as those gentlemen study their magical craft. However, if you are willing to do the homework, the conflicts and magical interludes, the faerie and political machinations, and the eerie collision of magic and mortal worlds are well worth the wait. Plus, the ending is one of the best I have ever read.

I highly recommend these books together with a hot cup of tea while curled into a favorite armchair by a fire -- on a dark and stormy night. 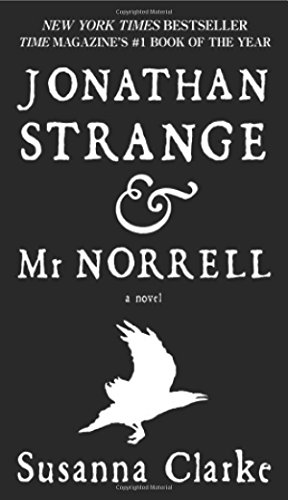 The Ladies of Grace Adieu and Other Stories
If you're not ready to tackle a book the size of Jonathan Strange and Mr. Norrell but you are intrigued by the writing of Susanna Clarke, try this short-story collection. It is a fascinating compendium written in the style of the larger novel (and, in fact, some of the characters who appear in Jonathan Strange and Mr. Norrell also people these lovely little tidbits of her writing).
Buy Now

Have You Read "Jonathan Strange and Mr. Norell"? - ...if so, what did you think?

Have You Read "Jonathan Strange and Mr. Norell"?

The new BBC Series based on this fantastic novel

Please let me know you visited.