A Review of Leviathan by Scott Westerfeld

Leviathan is an extraordinary tale of adventure set in an alternate version of World War I. In this story, technology had taken a few leaps that changes the course of history.

Darwin had discovered DNA and worked out how to adjust it to create new fascinating creatures that humans could use to their advantage - like talking message lizards, and hydrogen filled flying jellyfish. Similarly, mechanical engineering had advanced so far as to create giant walking machines piloted by soldiers

Leviathan is the story of two teenagers at the center of it all. A British girl who leaves London as an air soldier, and Austrian prince who leaves his home after the assassination of his parents: Archduke Franz Ferdinand and his wife.

Between the Darwinists and their fabricated beasts, and the Clankers and their elaborate machines, we get a story that exhibits steampunk at its best.

Sometimes I choose a book because I've heard great things, but sometimes it's because the cover it just staring me down. That's why I picked up this book. Serendipity I guess. And, I'm quite happy I found it.

The story of Deryn, the brave yet humble girl from London, and Alek, the Austrian prince on the run is one filled with action. This is a war story filled with politics, strategy, compromise, and survival. In it is so much to think about regarding the sacrifices of war (and sacrifices to prevent war), and how one event sparks a chain reaction.

The steampunk nature of the book lets you imagine scenes, creatures, and machines like nothing you have experienced before. While the book has extraordinary illustrations, I don't think they are needed. The text gives you all you need to make a mental image of what's happening. Perhaps, though, they are helpful for younger readers to envision the machines or the whale's innards. (That's right, a portion of this book occurs inside a fabricated flying whale.)

I think this book is especially great for teenage boys, but certainly something that would be of interest to girls as well. Though written as a young adult novel, it certainly is a story that adults would enjoy as well. I thought it was just great.

This is not the kind of trilogy that lets you be satisfied by just reading the first book. At the end of the book you will be scrambling to get your hands on a copy of the next in the series, 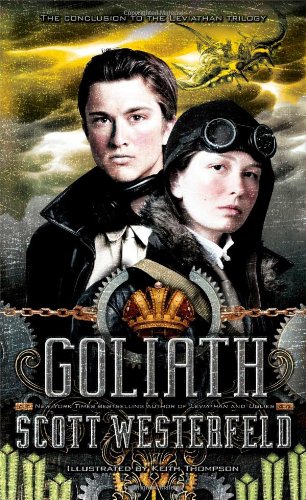 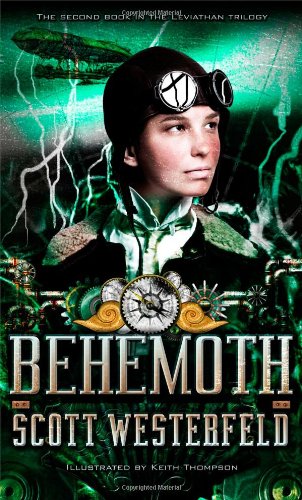 Don't Judge a Book By Its Cover

Here's a perfect example of not judging a book by its cover. I'm not a huge fan of the current paperback cover of Leviathan (the one with Alek's face on it), however I love the hardback one to the left. Actually, there are a bunch of covers to Leviathan. I found all these online, and none of them are the one that I first picked up.

I initially listened to the audiobook of Leviathan before I looked at any of the images in the book. I found this a very satisfying approach. Cummings was barking brilliant!

Have you ever read a steampunk book?

The Illustrations in Leviathan

I listened to the audiobook first, and therefore, I didn't even know that this book had illustrations until afterward when I flipped through the hardback book.

The illustrations by Keith Thompson are very well done, and nicely matched to the scenes and characters I had envisioned from the book's descriptions. He captured well the details of the machines and creatures in a style that feels fitting with the time period of the book.

The Manual of Aeronautics

Throughout the Leviathan Series, Scott Westerfeld creates a world filled with extraordinary machines and beasts. This book takes a deeper look at these things with stunning art by illustrator Keith Thompson.

The Manual of Aeronautics: An Illustrated Guide to the Leviathan Series
Buy Now

Go ahead. Jump in and grab the whole trilogy so you don't have to wait at the end of one book to dive into the next.

Scott Westerfeld has already proven that he can create a world and a society in a story that draws you into it. He is also the author of the wildly popular Uglies series. The Uglies series, initially a trilogy but now has four books, is a set of YA novels set in a future distopia in which all citizens are turned "pretty" at age 16 by way of extensive plastic surgery. The Uglies is in the production stages of being turned into a film, produced by John Davis (who produced Eragon).