Relax and Laugh With Confessions of a Shopaholic

A few years ago, a friend loaned me Confessions of a Shopaholic and insisted I read it. She said I would love it. I honestly hadn't heard of it before, but I had just finished the last Harry Potter book and loved the idea of reading something uplifting. My friend was right--I absolutely loved the book!

Becky Bloomwood is a London woman who LOVES to shop. It doesn't matter what it is, if it's in a store (or a catalogue or a television ad), she wants it. It doesn't seem to matter if she had wanted it before; once she sees something, she can't forget about it. Unfortunately, she shops to the point of self destruction. The problem is, she isn't especially wealthy. She has a decent paying job (as a writer at a financial magazine, ironically), and her best friend, Suze, lets the rent slide a lot, but Becky loves high end fashion. And of course, high end fashion isn't exactly cheap.

When she sees a Denny and George scarf in a store one day, she knows she just HAS to have it. People will call her "The girl in the Denny and George scarf." (She is always convinced everyone will notice her clothes.) In a state of desperation, she announces to her office that she needs money for this scarf. Of course, she can't say it's for her, so she claims it's for her very sick aunt. Wealthy businessman Luke Brandon generously gives her the money, but when he later sees her wearing it instead of her "aunt," Becky finds herself caught in her own lie. Things quickly spin out of control as she tries to save face but only seems to run into one problem after another.

Becky is compulsive and irresponsible and on the one hand, you want to just shake your head and wonder what on Earth she's thinking. But, she's so darn lovable, you'll find yourself rooting for her no matter what she does. She has a heart of gold and her intentions are (almost) never bad, even if they are a tad selfish sometimes. She's a easy to relate to and you may even find a few similarities between her and yourself.

Confessions of a Shopaholic is only the first book in Sophie Kinsella's delightful series following Becky Bloomwood. She follows it with five more books (and hopefully more one day), four of which come in this set. If you're looking for a light, fluffy, and uplifting read, Confessions of a Shopaholic is the perfect series for you. Sit back and relax in your garden or on the beach and dive into this wonderful world. 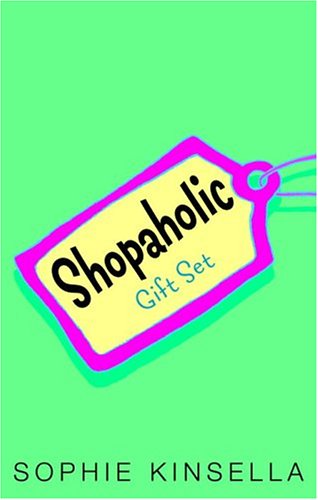 I have to admit that I haven't read any of Sophie Kinsella's other books (though several are sitting on my bookshelf tempting me each time I walk past). However, she's a fantastic author and my sister swears by all of the books. Once you've finished the Shopaholic series, make sure to try her other books, too.

Have you read Confessions of a Shopaholic?