A Traditional and Beloved Version of The Gingerbread Boy

Paul Galdone's The Gingerbread Boy was a favorite of my boys when they were growing up. This gingerbread boy runs "as fast as he can" to avoid all of the characters in this book including the bakers, the farm animals, the threshers and the mowers. However, in the end, he goes the way of "every single gingerbread boy that ever came out of an oven" but his exciting and funny adventure is one you won't want to miss sharing with the youngsters in your life.

Click here to order your copy of The Gingerbread Boy from Amazon.

The Best Line Ever:

Catch me if you can!

You can't catch me!

A Plush Gingerbread Boy by Ty, This One Is Sure To Be Treasured - How can anyone resist this gingerbread boy?

Pair him with a copy of the book for a gift your child will love!

Who Is Paul Galdone?

Paul Galdone is the author and illustrator responsible for this version of The Gingerbread Boy.

Paul Galdone was born in 1907 in Budapest, immigrated to the United States in 1921 and lived until 1986 during which time he was a fairly prolific children's literature author and illustrator. His work with Eve Titus was nominated for Caldecott medals in 1957 and 1958 and became Caldecott Honor books in 1971. After his death, he was awarded the 1996 Kerlan Award for his work in children's literature. His renditions of books like The Little Red Hen, The Gingerbread Boy and The Three Billy Goats Gruff are very popular.

I really cannot say it any better than this Amazon Customer did:

"My three and a half year old son loves this story which is about a gingerbread boy who runs away from people and animals who want to eat him, only to wind up in a river, on the back of a sly fox, who pretends not to be interested in him. The fox eats the boy but this story is not scary. My son tells me it is "OK that the fox ate the gingerbread boy because he is really a cookie, and not a real boy". I would not recommend this book to kids who are three and younger as it might scare and confuse them. This is an older traditional story, a classic. Highly recommended." ~~ charlie4

The Gingerbread Boy By Paul Galdone

"A pleasant retelling of the classic tale by Paul Galdone, in which the Gingerbread Boy manages to elude the clutches of everyone he meets until he happens upon a clever fox. Peter Kovner provides an engaging narration. The actual story narration is preceded by a verbal description of the first page, helping pre-readers know where to begin. The voices for the various animals and characters are silly and expressive. The story is accompanied by fluid background music that supplements the telling nicely. Sound effects are utilized throughout the story. For example, chase scenes are accompanied by the sound of running feet. Side one of the tape includes page-turn signals that sound like a flute trilling. At times the signal sounds similar to the background music. On side two, the story is told uninterrupted. This book and tape set will be a useful addition for public and school libraries." ~~ Amazon I think it would be a marvelous addition to your home library, too. 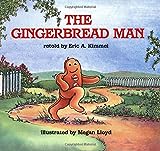 The Gingerbread Man
This version was also a favorite of ours. If you read the customer reviews, you will see that the lower star rating is misleading because someone who loved this book gave it 3 stars.
Buy Now