Frank Lloyd Wright (June 8, 1867 - April 9, 1959, aged 91) was a world famous architect. Born in Wisconsin and retain by the best in the world for state of the art luxury hotels, international corporate headquarters and fine high end homes. Best known for his "prairie school" architecture. The Prairie School was famous throughout the world but best known in the region that Frank Lloyd Wright worked and lived in Illinois and Wisconsin or Midwestern United States. The Prairie School was the label given for a type of architecture that focused "upon an indigenous North American style of architecture that did not share design elements and aesthetic vocabulary with earlier styles of European classical architecture."

His favorite fireplace is stated to have been this elegant curved fireplace that was a focal point at the Geneva Lake Hotel in Lake Geneva, Wisconsin. Sadly that structure was built in 1912 and was destroyed by fire in 1970. A 70 room structure designed by Wright to compliment the horizontal lines of the prairie. The hotel was modeled after Wright famous Imperial Hotel in Tokyo Japan and overlooked the beautiful waters of Geneva Lake in the city of Lake Geneva, Wisconsin.

For a complete list of the Wisconsin properties see the MadisonPublicLibary.com

Frank Lloyd Wright was born and raised in Wisconsin. FLW was commissioned for several projects, with over 1,000 designs and hundreds of buildings including residential and commercial properties. Yet, only one skyscraper - the Price Tower in Bartlesville, Oklahoma.

Many of the homes Wright designed and many of the commercial structures remain today as a testament to his creativity and architectural genius. His artistic work from structure to stain glass to furniture design can be seen around the world. And yet, Taliesen was the name he choose for his personal places of residence. Taliesin West was his Arizona home in Scottsdale. He later added an extensive studio in Scottsdale that is open today for tours and has received rave reviews for its 90 minute tour. 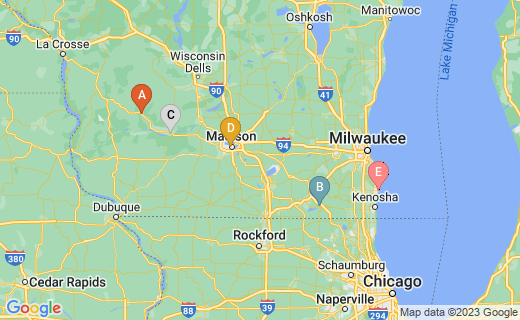 During his lifetime, Frank Lloyd Wright authored over 20 books.  While many of the books today are written by others, the breadth of written material has provided history with a bountiful collection of quotes that directly attributed to Frank Lloyd Wright.  His philosophy on architecture was very independent.  His philosophy on life was very radical for the age that he live in and for the location that he lived in.  Remember, he lived in the conservative region of the United States.  When he was older, he did move to Arizona where he died in 1959 but the majority of his life was spend in Illinois and Wisconsin. 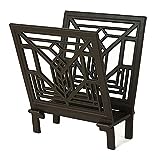 Frank Lloyd Wright was a art collector, creator and dealer.  One of his ventures which was very profitable was his collection of Japanese art.  His focus was upon woodblock prints called "ukiyo-e".

In keeping with his professional philosophy of perfectionism, often Wright would design the home and the interior elements.  This magazine rack and the following doormat and fireplace screen are all reminiscent of Wright's love of the refined geometric.  Using blocks to build and design and create beauty.  Straight lines mimic the horizontal beauty of the flat lands of the Midwestern prairie landscape and yet the intricate designs capture the eyes and inspire the soul.

A distinctly American architecture called Prairie School was originally inspired by Louis Sullivan, a Chicago architect who Frank Lloyd Wright worked for briefly.  Other designers who hailed this form of architecture include George Grant Elmslie, William Purcell, Parker Berry, William E. Drummond, and William L. Steele.  The most notable of all architects, of course, credited with the Prairie School Style is Frank Lloyd Wright.

The very essence of this type of architecture was the concept to use nature as a guide - to go to nature for "school" and education and all design element.  And this is precisely what the Prairie School architects did.  While the fireplace screens are not licensed by the Frank Lloyd Wright Foundation, the screens are a reflection of this type of architecture - celebrating the horizontal plains of the Midwestern landscape and celebrating nature in any form - plant or animal.

Frank Lloyd Wright began building this desert masterpiece in 1937 as his personal winter home, studio, and architectural campus. Located on the beautiful Sonoran desert in the foothills of the McDowell Mountains in northeast Scottsdale, the site offers a broad range of guided public tours. Visitors experience firsthand Wright’s brilliant ability to integrate indoor and outdoor spaces.