Are you looking for the perfect gift idea for for his birthday, Christmas, Father’s Day, or maybe even Valentine’s Day? A Leatherman multitool is one of the most useful and practical gifts for men that you can buy. He'll love it more than the tie or socks you got him last year! A Leatherman is a super tool manufactured to the highest quality standards and able to accomplish all sorts of job or hobby tasks. Leatherman tools are a great investment for any tool or emergency set.

Leatherman full-size multitools come in a variety of thirteen different configurations to make tough jobs faster and easier. From the powerhouse Leatherman “Surge” featuring 21 tools in one, to the compact Leatherman “Skeletool” which has seven, you are sure to find the perfect Leatherman multitool that can get the job done. Here is a list of the top five best Leatherman mutlitools that can tackle the toughest jobs.

The Leatherman Wave is the most popular full-size multitool, and with good reason. This tool features outside accessible blades which are able to be deployed with just one hand. A 2004 redesign equipped the Wave with even larger knives, stronger set of pliers and longer wire cutters for even more versatility. The Leatherman Wave features 17 top-quality tools such as needle-nose and standard pliers, bottle and can opener, wire cutters, serrated and clip point knives, saw, scissors, two bit driver sizes, two file types, a ruler, and even an eyeglass screwdriver bit for those pesky tiny screws. The Leatherman Wave is available in stainless steal and black oxide versions and comes with either a leather or nylon sheath. Along with a standard Leatherman 25-year warranty, the Leatherman Wave is the best multitool money can buy. 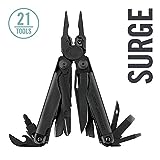 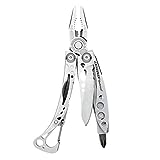 The Leatherman Charge is actually a combination of two other great Leatherman multitools, the Charge AL and Charge ALX. The Charge TTi has been fitted with premium comfort titanium handles giving it a sexy, sleek look. But looks aren’t what gets the job done. The Leatherman Charge TTi is a true workhorse among multitools. The Charge TTi boasts 19 of the most useful tools along with 8 interchangeable driver bits. The Charge TTi’s arsenal includes an S30V stainless steel knife, serrated knife with cutting hook, needle-nose and standard pliers, bottle and can opener, 2 wire cutters, wire stripper and crimper, saw, scissors, two file types, a ruler and 8 separate driver bits for different applications. If you're tired of searching for the right tool when you need it, try the new Charge TTi. 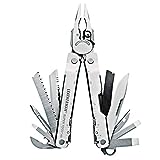 In 1983, Leatherman has been producing the finest multitools on the market and all are backed by a 25-year guarantee. Leatherman was in the news in October 2010 for donating Leatherman Wave multitools to 33 miners who had been trapped in a Chilean Mine for more than two months. Each Leatherman Wave was engraved “Nuestros 33 Heroes”. Leatherman also made donation during 2009’s Haiti Relief effort and has a long history of donations in support of disaster relief operations.