Best and Cheapest Places To Retire Besides Mars

In the mid-2010s, Mars One in Europe and a few other projects planned to send individuals toi Mars to colonize and spend the remainder of their lives. After the Great Recession of 2008 - 2010, this sounded like a good idea to many people.

The selection process was very long and drawn out, ending in a reality show gig and many of the people who would liked to have participated were either ruled out or lost patience with the time line. Therefore, affordable retirement options are still needed on Earth.

Cuts and Delays in Social Security

Some of those who praised Reaganomics are angry that they now have to wait longer for Social Security Retirement and that their monthly check will be for less than expected.

If they did not already know, Baby Boomers found out in 2011 and 2012 that the Social Security Retirement ages increased, per a plan set into action decades in the past (reference is here).

The US Congress under the Reagan Administration saw to it that the country would save money by raising retirement ages. Reductions in monthly payments were proposed 2012 - 2016 Under the Obama Administration and raises were frozen.

Now, some of those who praised Reaganomics are angry that they have to wait and that their monthly check will be for less than expected.

The younger members of the cohort are required to work longer than those born in 1945 - 1954, with the ultimate retirement age to rise to 75 or our Millennial generations (Generation Y). I've already received notices of this for two years running and the difference in cash payment at ages 66 and 70 is quite a large difference.

Baby Boomers will be looking for cheaper places to retire through 2034, the age that the youngest of the cohort begin to retire at full benefits at age 70. I expect the age for full benefits to be 75 by that time, so the year will move forward to 2039 and we will have been on Mars as a nation about 10-15 years by that time.

Aerospace mining efforts began in 2012 with former Google leaders and James Cameron, Richard Branson; and Planetary Resources, which is always looking for engineers.

A real chance exists for some Baby Boomers to travel to the moon and Mars to set up living habitats and expand into colonies. In fact, between 2011 and 2015, lunar landers were prepared for the moon and outer-space habitats were built and kept at the ready by a number of private aerospace companies.

Actor and Boomer Tom Hanks announced that he would be the first to sign up for a mission to settle Mars, but whether he did so is still unknown. Regardless, a number of senior citizens and others will spend the rest of their lives on Mars beginning in the 2020s. However, not everyone can retire to Mars.

In the 1990s, a short lived NASA project tested the effects of living in space on the oldest senior citizens and their adult children in their 50s and 60s (reported in the Columbus Dispatch). One of the reasons for the test must be these new opportunities in space for seniors. The work on Mars would be long-term and the volunteers would not return to Earth. That's one way to solve the retirement living problem. Still, only a few people will be able to go in the 2020s.

For others of us, Asheville NC, the filming site for the film The Hunger Games with Jennifer Lawrence, was named to the Number One position among the Top 100 Best (and cheapest) Places to Retire published by TopRetirements.com in 2012. The city has remained high on Top 100 lists ever since,.

American Style Magazine chose Asheville NC as the Number One Small City in the USA for Art in 2011.

Asheville is also home to the greatest

shopping cart race in the world every November - The Iditarod. It includes a food drive and a lot of chaos as teams of 5-person costumed Idiots tie themselves to their carts and run among themed floats. This is all part of the River Arts District -.

According to Trulia, the real estate site with its own SmartPhone app, a number of dwelling are for sale in Ashville most of the year. The price range on 1,000 homes that are single family styles, condos, or apartments for sale is $29,900 to $4.9 Million. The median price is $209,000.

Apartments for rent in Asheville appear in the range of $285/month for an efficiency to $2,000/month for a condominium in the Downtown area. Median price is $975 (2 bedrooms and 2 bath). 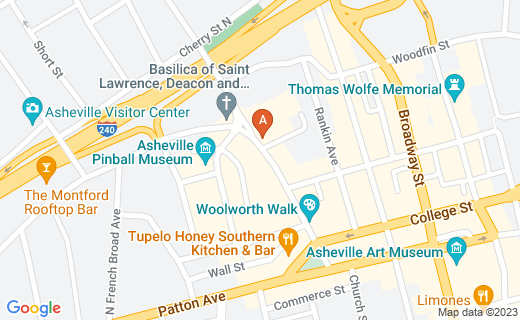 The North Carolina Department of Taxation and the County Departments that include Asheville's Buncombe County tell us that Senior Citizens ages 65 and over, as well as the permanently disabled are excluded from Personal Property Taxes in this state. Those that must pay this tax must do so only on the following items, and I quote:

Attractions in the City 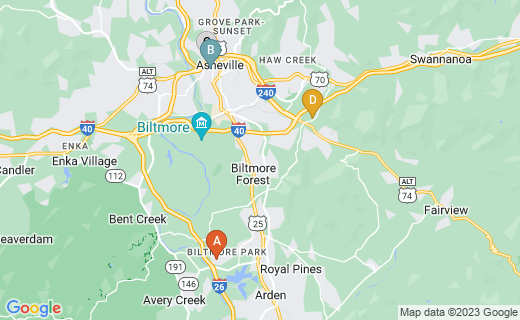