Motivation: Take a Trip down the Mississip' and Discover Treasure!

Your Personal Treasure Barge: Excerpt from Born to be Rich

Imagine yourself alive during the time of Huck Finn and Tom Sawyer, living an easy life on the peaceful banks of the Mississippi without a care in the world, sitting in the summer sun wondering if the catfish would take the bait.

As you sat there relaxing, you noticed many items floating down the river and decided to reach out and try to scoop up anything that looked interesting. If there were any “law of the river,” it would probably be that you could keep anything you found floating there unless it was claimed and identified by the owner who had lost it.

An old boot floated toward you. You retrieved it, and decided to keep it in the event a matching boot came along. When another boot did not appear, you started to learn that the items that floated easily up to the bank were usually nearly worthless. The more interesting things seemed to float by a few feet beyond the river's edge.

Though you had not intended to get wet, you decided to wade out a few feet so you could retrieve some floating items of more value to you. After several days of fishing and retrieving items floating near the bank, you decided that you were getting things of limited value. You made a plan to venture far out into the river in search of more valuable floaters.

You traded all the items you had recovered up to now for a small rowboat and began to scavenge successfully for more interesting discoveries. While recovering an interesting piece of driftwood one day, you watched in amazement as an old abandoned barge came drifting down the middle of the river. Though other abandoned barges floated down the river from time to time, and were quite common, this one glistened spectacularly from a great distance. As it floated closer, you gazed in incredible disbelief at diamonds, rubies, silver, gold, and other treasures that defied description.

You rowed toward the astonishing site, but it drifted past you and out of sight before you could reach it.

You tossed and turned in your sleep with distress that night. You kept seeing the barge floating past you over and over again. Soon you began to wonder if it were only a mirage sent to haunt you. In your restless sleep, you reached out for the great treasure barge, but it always drifted beyond your grasp.

When you told your friends about all this, they laughed and said you had been out in the sun too long. Undiscouraged, you began plans to possess any treasure that might come floating down the Mississippi, regardless of the personal cost to you.

Though your two closest friends were skeptical of your vision, you eventually persuaded them to help scavenge the river every day for useful items. The three of you thus formed a team for a common goal, dividing duties so that you would have a better chance of retrieving any great treasure that might eventually drift down the river. One friend scavenged, the other sold the retrieved items to a junk dealer, and you obtained a bank loan in order to purchase an old tugboat badly in need of repair.

One day, while you and an associate were working to restore the old tug, the partner in the rowboat signaled from a half mile offshore, indicating that something valuable was drifting down the river. Soon he rowed ashore and reported that he too had seen a treasure barge loaded with gold, silver, diamonds, and immense treasures.

Greatly excited, the three of you began working furiously night and day to restore the tug and outfit it with everything needed, such as rope, shovels, wheelbarrows, and food. You felt you must be prepared for any action necessary to recover the treasure.

Several months went by without incident. Your fellow workers sometimes became discouraged, but you pulled them through with your persuasiveness, charm, and cheerful disposition.

To pass the time, the three of you decided to clean up the riverbank site which had become a second home. You set up a picnic area for tourists and offered a ferry service across the river for a small fee. You also built a refreshment stand, began to rent rowboats to other scavengers, and sold bait and tackle to passing fishermen.

After many months, you found yourself ferrying tourists across the river ford about a mile from the great rapids, when a familiar glimmer caught your eye. You dropped off your passengers on the dock, then called your two team members together and headed the old tug full throttle toward the center of the river. Your team was ready. Anything that came floating down the river was yours!

The barge floated into full view and displayed a wealth of treasure many times larger than your first sighting. You began to wonder if the three of you could wangle all of this incredible wealth onto the safety of the shore. While you were trying to decide whether to guide the barge ashore or load its treasure directly onto the tug, two more treasure barges drifted into view directly behind the first. They bore wealth that far surpassed your wildest dreams!

Your team set about its task. One partner jumped from the tug and boarded the first barge. The other tossed him a rope with which to secure the first barge to the tug. In a similar manner the second barge was secured to the first, but the other teammate indicated that the third barge was taking on water and its treasure would need to be loaded directly aboard the tug.

The tug and barges were immediately secured into a circle that allowed the loading of the treasure from the third barge, using shovels and wheelbarrows. After an hour of furious activity, the third barge began listing badly, so you decided to abandon the remainder of its treasure in the interest of safety.

Your team towed the first two barges ashore, where a large group of your friends had gathered during the excitement. No one was laughing at you that day.

It took about a week to tally up the treasure. You and your partners celebrated at a dinner party on the old tug. Comparing the wealth of the great treasure barges with the profits from your daily activities, you discovered that your daily business would bring in nearly as much, in the long run, as the treasure barges.

You felt good. You had created a thriving business, and your team members would be your friends forever. It did not matter whether another treasure barge ever drifted down the river. You had proved to yourself that you could make your dreams become true.

Authors note: I wrote Born to be Rich in 1985 and published it myself. Now that I’m establishing a writing career, I’ll dust off some old copies and publish the chapters from time to time on the internet. Chapter one is reprinted here. I hope that you enjoy it and will take a few moments to make a comment.

◊Realize Your Dreams by Setting Goals

Retail Sales Guide for setting up your business

How to Think Small Business for Big Profits
Buy Now 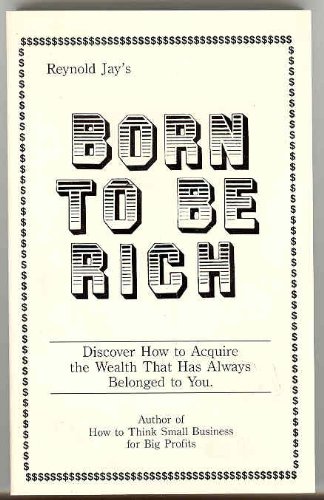