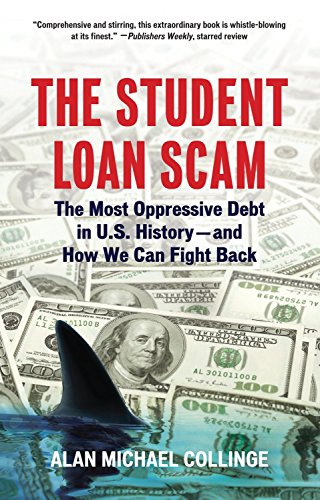 The Student Loan Scam: The Most Oppressive Debt in U.S. History and How We Can Fight Back
Buy Now

Make no mistake about it education is a business and being a business they are in it to make money!

When the Depression hit, yes I said Depression NOT RECESSION, many people decided to ride it out by getting a degree. Rather than look for a job when there were no jobs they decided to pursue graduate degrees, law degrees, even culinary arts degrees. And just as in the past the financial aid offices opened their arms to almost everyone who had a pulse and wanted a student loan. Sure, and why not...student loans are backed by the government, sort of like Wall Street Bail Out Money! The colleges can't lose because we the taxpayers will guarantee the money if the student defaults on their debt. Because of this some schools have actually sought out and registered homeless people just to obtain student loans from the government. It's a complete scam on the American public.

The only losers in this game are the students who can't find jobs after incurring millions of dollars in debt and the taxpayers who will be tapped again to pay for the defaults.

The student loan scam is destined to be the next great credit default bubble bursting in our country!

We have been sold a bill of goods when it comes to higher education. We have had it pounded into our psyche that unless we go to college we are neanderthals, that we'll never get a decent job or amount to anything. Now, let's get something straight here, I went to college and I loved it. I had some student loan debt and paid it off. But, when I went to college my semester fees were $300.00 a semester at the California State University, a far cry from what they are now. And, I was able to get a job after graduating, something that is becoming more and more difficult. Money magazine reports that after adjusting for financial aid the amount American families pay for tuition has skyrocketed 439 percent since 1982!

According to one study done by the College Board one in five college students with bachelors degrees will not be able to pay their student loan debt. I believe the number is much higher.

Who is benefiting from these student loans? The colleges and universities benefit as do the lenders (read banks) that are guaranteed their money. And who suffers? The taxpayers and low income students who will be saddled with enormous amounts of debt while trying to find a job that pays more than $10.00 an hour. How much more can we take as a country before we collapse from within?

Prior to the crash of 2008 I had a friend who just finished law school, he always encouraged me to go to law school and it was something I seriously considered until I crunched the numbers. I would have to take out a minimum of $100,000 dollars in graduate student loans and that was only if I could get half of the money in free grants. At the time my friend was making around $300,000 dollars a year but worked 10 hours a day 7 days a week (and that is no exaggeration), his student loan was approximately $1,000 per month, nothing right?.easy to pay while making $300,000 a year! Well, guess what? He lost his $300,000 job and the only thing he could find was a job that still required him to work 70 to 80 hours a week but now he only receives $60,000 a year. That was what I was making as an administrative assistant in Manhattan! He still pays $1,000 dollars a month for his law degree and is poorer than most secretaries.

I have another friend who has racked up nearly a quarter of a million dollars in graduate student loans. She will never be able to find a job that will enable her to pay that debt off. I can't help but wonder how many more people are out there like my two friends.

If you think people owe a lot on personal credit cards, they are nothing when compared to student loans. And, what do you think is going to happen when all those people get their degrees and cannot obtain work?

Do you think college is worth going into debt for?