How to Save Money on Your Cable Bill

I am directly involved in the industry of streaming devices, customer support and advisor to app sales and app research and development.

Americans Spend Over $200 on Entertainment Every Month.

In a September 2016 article for Fortune says that the average cable bill rose 4% from $99 to $104. The article goes on to say that cable prices have continued to increase in the past faster than the rate of inflation - in some cases up to 8 times that amount.

The article continues that some attempts to cut cable completely turned out to be more expensive with other providers. Many have cut their 'pay TV packages' in order to lessen the impact of these prices - which means many have whittled their cable bills down to the bare-bones package of basic cable.

It just doesn't seem like Pay TV providers are getting the hint - on the one hand they are raising their prices while on the other, subscribers are leaving in droves looking for better value elsewhere.

Though Roku, Amazon, Nef-flix and other 'like' devices and services remain available to American families, value still plays an important part of their budget as does the availability of their favorite shows that are only available on cable - or are they?

So What is a Streaming Media Player and How Can it Help Me?

What is a streaming media player? It's a device that allows you to connect your TV to the internet to stream video and music from online services. Items such as Roku, Amazon Stick and Dragon Box are all media players that are able to stream both music and video. 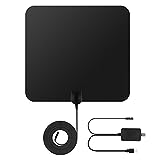 TV Antenna, Gipow Amplified HDTV Antenna 75 Mile Range with Detachable Amplifier USB Power Supply Signal Booster Upgraded Version Better Reception, 16ft High Performance Coax Cable
I highly recommend and use an antenna such as this to pick up your local channels that are not available through most streams. This will keep you abreast of news and events in your area - network channels on your streaming device will take care of your shows/movies.
Buy Now

It's pretty clear to see why I ended up with a Dragon Box. One price for the device, no monthly payments. The support is awesome!

Streaming is a relatively new concept to most American families - there are more households that have cable or satellite than they do streaming devices. However, it is catching on quickly and it's only a matter of time before more technology is poured into streaming and better, more quality apps are created.

There are still problems with buffering, ceasing, flickering, app exiting, no sound, synching - I mean, the problems are endless but they are all outweighed by the many advantages that streaming gives you.

Nearly half of these technical problems can be avoided if you take the steps to ensure that your communications or WiFi is running efficiently. It's not to say that media boxes have their own problems, I'm just saying that a large percentage is due to a bad connection, downed stream, or the device needs to be re-set.

Here are a few things you can do to ensure a more flawless reception - especially before a big fight or event:

How Much Cash Would You be Saving if You Cut Cable Now!

Why I Left Cable for Dragon Box Streaming

For years my wife and I have been playing that up-down game with the cable company - you know the one - we ask them if there's a lower rate because we can't afford it and they answer with, "well we can offer you a one year plan for this much..." Of course about a year ago all the plans came to an end and they wouldn't work with us anymore - when my wife told the operator that we couldn't afford it, the operator was non-plussed. We cut both our TV plan and premium WiFi to the very basic of both and was still paying $140 a month. I looked around for another WiFi provider but there were none at the time - I was stuck because we needed on-line access for my business.

I kept trying other WiFi providers without much luck until the summer of 2017 when I found one that recently extended their coverage to my area of the city. We had earlier picked up Netflix and Roku to supplement our basic cable and we also picked up a HD TV antenna for local networks. We were ready to cut the cord with cable.

In July we were gifted a Dragon Box by my daughter whom understood the dilemma we struggled through with cable and thought that the Dragon Box would make a great addition to our entertainment arson.

We were blown away with the ability of our new Dragon Box to not only stream movies that were 'still' in theaters but all the sports, Paid Per View access and big fights. We watched the Mayweather/MeGreggor fight for free - no monthly fees, just a one time purchase for the Dragon Box.

As you can imagine, we cut our Netflix bill and moved the Roku to the bedroom TV. Our new WiFi provider costs less than $40 a month - that's over $100 that we can add to our savings that we never had before. Guess what - I know so many people that have cable bills that range towards $300 every month. Can you imagine what families can do with an extra $300 a month - $3,600 a year?

How Much Are You Paying for Cable/Satellite Services?

If you cut your cable or satellite bill today, how much would your monthly savings be?