Here we go again folks! It seems like every single time that word “reform ” shows up in the vocabulary among our Washington elite elected officials it comes down to just one question…”how much is it going to cost the taxpayers of America this time ?” The word “reform ” is a dirty six-letter word that really means “you are about to get the shaft ”. By the sound of the news bites coming across the airways today, this definition of the word will be followed to the letter.

President Obama has his “Commission on Fiscal Reform” launched and engaged in the process of defining what it is they plan to reform. Now, let’s get one thing clear up front here before we continue. Just because the word “fiscal” relates to the monetary process, it does not, by any means, indicate that we are in a discussion that has anything to do with spending or the lack there of…not in Washington DC anyway. This commission really has one purpose in mind though it might not be addressed in the formal mission statement associated with it. That mission is to define revenue streams which will allow the current level of spending to continue unchecked and unhampered. Anything else that comes from this commission will just be added fluff.

Is it not interesting that a politician or might I say elected official cannot find it within themselves to speak of spending in a conservative manner? Apparently, spending is what the government does and wants to continue to do as it grows itself into oblivion. You see, without spending, what would the government do on a daily basis. What would all those worn out career political hacks that populate Washington today have to get up for in the morning if not for spending the taxpayer’s money? Get the visual, the politician arises from his bed and runs to the window throwing back the curtain to let the sun shine blaze into the room upon his crisp white nightshirt and then sings out in a high operatic voice, “It’s another glorious day, on what might I pork-barrel money today?” He does so while lifting his arms to the heavens in an angelic, empowered fashion.

The truth of the matter is that “spending ” has truly become the mainstay of the government, and as it gets larger, it feeds it urges by spending more and more and more. It enters in to what should have been trust funds like Social Security and spends all the funds that have been collected and will be collected between now and forever. Then, it turns right around and tells us the fund is safe and in the black until 2036…yet, there’s really no money there because in reality it has already been spent. No one in Washington has the guts to tell the American people they literally stole it from them.

Washington officials are quick to point out that the nation can really no longer afford to provide Social Security without serious financial consequences. Let’s be clear here and call it what it really is today. Social Security today, and for the last fifty years for that matter, is nothing more than a glorified Bernie Madoff ponzi scheme. Our elected officials have long since robbed the fund of any real assets. It is a fund totally filled with promises or IOU’s from a federal government that could not keep its tax and spend fingers out of the money that hard-working people were made to pay and expect to receive a benefit from when the time came. For the government to have soaked the “baby-boomer” generation and beyond out of billions and billions of dollars and then to turn around and say we cannot afford it any longer is a crime, an absolute crime. In fact it may be the single biggest crime of all times yet there are no culprits to convict. Those who have been bilked out of their hard-earned money for years and years are supposed to just shrug their shoulders and go on with life. In the eyes of the Washington elite, those who have funded this program should have no expectation to benefit from it.

The government, in the past two years, has grown by a factor of 25%. Now think about that for a bit. If you were a businessperson and employed a staff of workers, then you would expect that if your staff and overhead had grown by a factor of 25%, then your business must have grown in a proportion that exceeded the 25% number. Why? Because, as a businessperson, your goal is to make a profit and you set your policies and targets according to that goal. Our government, on the other hand, is not a profit center at all. No, in fact, it is nothing more than a sponge soaking up taxpayer money in leaps and bounds and sending out the other door even faster. Growth in our government does not come because someone made a calculated decision, no, it comes because a bunch of politicians had some whim that made their heart flutter or drove their greed to record levels thus it had to be done and done right now.

A discussion that includes a use of the word “fiscal ” co notates that there might be something responsible going on within that intercourse. Well, not in this case! No, this is all about looking for revenue streams to support spending levels. There is no discussion of tax relief, no discussions of shrinking government, no discussion of eliminating some of the absolute out-of-control pork barrel crap that is going on in America today. No discussion whatsoever. They reference tax write-offs long enjoyed by the American public like interest on our home mortgages and insinuate that this is a viable way to lower the deficit which has accumulated to monumental proportions since 2007 with great thanks to House Speaker, Nancy Pelosi, who publicly announced that there would be no further deficit spending by the Congress on her watch. They do this while at the same time hiding away a 3.8% sales tax on your home in the recent healthcare bill which was enacted into law. The fact of the matter is that no money, be it tax write-offs or whatever, is going toward the bottom line in our current scenario. All it will be going for is the continued effort to spend America into oblivion. It is time to stop that mindset in this country.

The United States Federal Government has a mission. That mission is to provide for the common defense of our borders and our lands, to uphold the rule of law, and to sustain an economic environment in which individuals and business can flourish, generate revenue, and contribute to the overall economic growth of our society. As this growth takes place, jobs are created, pay levels increase, consumption increases, demand increases and in turn drives growth to even higher levels. Our government and our elected officials need to get back to the basic tasks at hand in America. Once that happens, America will get back to being the great America it has been and can still be.

Commissions appointed to define revenue streams have little to do with reducing spending our country. In fact the effort smacks with a mission statement that says to the people, “we have every intention of continuing on the road we are on, we simply have to look for ways to generate the money.” Would it not make sense to first establish a commission to determine whether or not this is a viable mindset under today’s economic pressures? Is there no logical mind among those in Washington that says, “why not reduce or stop the spending completely in some cases?” Can we not have an effort which looks at the total debt, then defines a methodology to eliminate it by some target date? Why not take the initiative to reduce the insane spending rather than by taking more and more from the taxpayers? Why not reduce some of the deficit by cutting a significant portion of the fat out of an overfed federal government beast? Why? Because the beast is not willing to gnaw at its own foot, that’s why!

The American public must get over the feeling that we are stuck on a ship without a rudder or a sail. We, as citizens, still have the power to vote and determine the outcome of elections. We have the power to send the people who brought us to this abyss back to the homes. We have the power to put new minds to work and assign them the task of getting America back on its feet. We have to power to say enough is enough and we expect a different direction. We have the power to reform. We have that power and it is imperative that we use it rather than sit and listen to more and more of Washington’s doublespeak which is only focused on the slight of hand that smacks of the intention to continue spending at the current level of insanity.

Our futures and the futures of our children are on the line right now in America today. The financial burden America is taking on justified by socialist politicians who are willing to implement a long failed economic formula will break our backs as a country. The welfare of every single individual is on the line today both in terms of economics, security, and freedom. The financial burdens imposed by elected officials who do not have the best interest of America in mind will be the chains that bind us all to the walls of a dark, dank, and uncertain future in America. 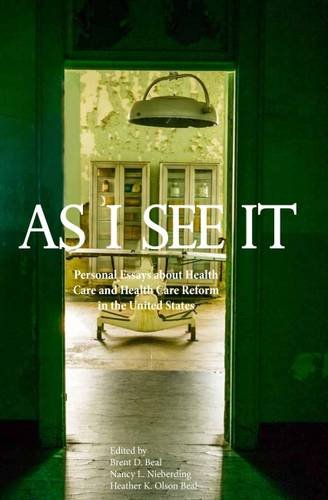 As I See It: Personal Essays about Health Care and Health Care Reform in the United States
Buy Now