Climate Change: What Does It Means for Wisconsin?

When the climate changes, it isn’t only the water, land, and wildlife that are threatened. We are too.

Climate change is changing the habitat we are used to live in, the quality of the air we breathe, the water we drink and the food we eat. Climate change may increase the prices we’ll pay for products, and the decisions we’ll take.

When Cynthia Rosenzweig—from the climate impacts group at Nasa's Goddard Institute for Space Studies in New York—and colleges analyzed articles published between1970-2004 they reported that 90% of environmental damage could be attributed to rising temperatures driven by human activities. The authors said that many species responses to climate change are evident even though within this period the temperature rise is only 0.6°C. IPCC panel predicts increases in temperature between 2-6°C.

In Wisconsin scientists have analyzed data collected by Aldo Leopold 61 years ago, and also 100 years ice record data. These reports also demonstrate that Wisconsin is already experiencing the effects of climate change. Changes in the cycles of life through the year or phenologies, which include the beginning and ending of flowering, bird migrations, and the reproduction of some Wisconsin wildlife could had already been affected by shifts in climate.

Early arrival of spring, that could be translated as warmer weather causing some plant species to unfold they leaves or flower much earlier that they used to was reported in 1999 for Wisconsin. The lead author Nina Bradley, daughter of Aldo Leopold and others, show 61-years of records and analyses of 55 phenologies. The records indicate spring advancement in the life cycles of 17 species. These records include plants, birds, and some data of ice melting. Among the birds, the geese return to Wisconsin much earlier in recent years. There are some species that aren’t responding to shifts in temperature. Bradley and others suggest that it is critical for species to adapt to shifts in climate or they would be in disadvantage. Some plant species for example, may be replaced by species that colonize early in the season or by invasive plant species that tend to do the same. These at the end may change the landscape Wisconsin people are used to see.

Some of the expected changes include:

· Changes in climate could also lead to migration of lower latitude species, more invasions, and local extinctions of plant and wildlife.

· Increase in flood and property damages—perhaps changes in insurance policies.

· Changes in temperature affecting fisheries such as ce/flying fishing.

· The lost of ice means economic losses for winter sports facilities including skiing, fishing and hunting. Consequently loss of jobs could happen in the tourism sector.

· Crop losses influenced by the increase in extreme events droughts and floods. An increase in the growing season may be beneficial for some crops but detrimental to others. For example, we could get more tomatoes and fewer apples.

· As a result there is an expected change in food prices with high crop yield causing a decline in the value of those crops. While the other more rare commodities will increase or will need to be exported from elsewhere to met the demands.

· Rises in the price of carbon intense activities will be the most direct consequence of climate change for Wisconsin says Peter Taglia from Clean Wisconsin. These activities include driving cars and using electricity at home and work.

· More tighten regulations regarding fuel efficiency may mean more government control, and lost of private on the side of the citizens. Some of the new technologies may allow regulators to access private information on consumer’s life style and activity patterns.

· New measure may include incentives to bike paths and alternative transportation such as electric cars.

· Increase in the renewal energy sector

For decades, Magnuson and his students and colleges have followed changes in the thickness of ice, and the length of the winter season in Wisconsin lakes. The winter data is variable, but it shows 20% winter loss in Wisconsin lakes. In the last decade winters have been shorter in comparison to most years before the 1950’s.

Some lakes and rivers level will rise. Magnuson shows this scenario for Monona and Mendota, two small lakes in Madison. The rise is related to the increase in extreme precipitation events. Climate change decreases the ice cover in most of the great lakes. And some lakes levels would decrease as a result. Those with larger surface would be also subject to more evaporation due higher temperature.

But the water level changes in Lake Michigan—now in its low cycle (2008)— are a more complex story. These changes can’t be attributed solely to climate change Magnuson says.

We don’t see climate change as a threat because changes in Wisconsin aren’t as drastic as some of the changes happening elsewhere. The Inter-government Project in Climate Change (IPCC) projections for other countries are dramatic. With sea level raise, for example, some places will disappear. For Wisconsin the changes are more subtle.

Slow changes are happening in front of our eyes. Our brain’s wiring system has problems registering slow changes. Economic losses in the recreational and tourist sector; changes in the levels of water of Wisconsin lakes, and more floods may help this slow changes to be assimilated along with other the issues related to climate change in Wisconsin.

Acknowledgments: This article come about from my participation in various climate change events in Wisconsin 2008-2010. Among this Climate Change is local where a group of panelist talked about the issues concerning climate change for the state of Wisconsin, USA (A two days event sponsored by the UW-Holtz Center). Another series of seminars sponsored by the Wisconsin Initiative on Climate Change, explored problems and potential solutions to climate change impacts http://www.news.wisc.edu/16292. My gratitude to Emeritus professor John Magunson from UW-Madison, Limnology, who graciously agreed to be interviewed by me in the Fall 2008.

Climate Change is Local: Science and the Public/ Holtz Center 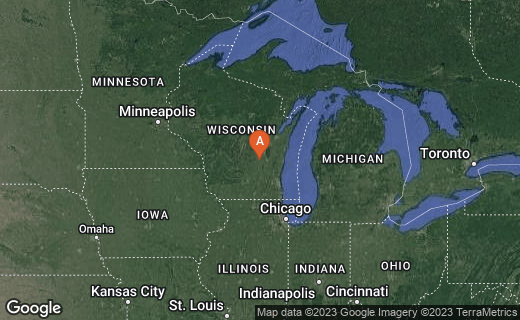