In 1517, Martin Luther nailed a list of 95 arguments against the Catholic Church's use of papal indulgences to the door of the Castle Church in Wittenberg.

Indulgences were (and are) used by the Church to raise money. They were supposed to grant forgiveness for sins, but by Luther's time, they had been abused by professional "pardoners" seeking to relieve the faithful of more and more of their money to the point that even Pope Boniface IX, more than a century before Luther, had condemned some practices associated with their sale. Unfortunately, Boniface was unable to stop them, and the resulting divide ended up splitting the Catholic Church.

What on earth does Christian religious history have to do with carbon offsets? Well, it's my (not very humble at all) opinion that carbon offsets are the modern day equivalent of papal indulgences.

Although carbon offsets have some benefits, all too often they are used as excuses by businesses and individuals alike to call themselves "green" while continuing to pollute as much as (and sometimes more than) before.

At the corporate level, some good may manage to come out of this, through increased investment in renewable energy and tree planting projects.

At the individual level, however, carbon offsets simply don't make sense. What on earth is the point of giving your money to a third party (the carbon offset company) when you can give it directly to a business or charity that's working to sequester carbon, develop renewable energy sources, or other activities that combat climate change?

Instead, here are some ways to support lifestyles and technologies that will encourage renewable energy and carbon sequestration:

It's a little known fact that grasslands sequester more carbon than forests. Over their entire lifespan, trees are actually carbon neutral. They suck vast quantities of carbon dioxide from the atmosphere and store it for decades or even centuries, but when the tree is felled or burned by man or nature, its stored carbon is released back into the atmosphere. This is why Indonesia and Brazil have carbon footprints greatly disproportionate to their average standard of living - deforestation releases more carbon dioxide into the atmosphere every year than almost any other single activity.

Grasslands, in contrast, store carbon dioxide in the soil, not in the plants themselves. The sequestered carbon is released only by plowing or other disturbances. (This is one reason no-till farming is considered more ecologically sound than normal plowing.)

There are a number of ways you can support grasslands conservation and restoration: 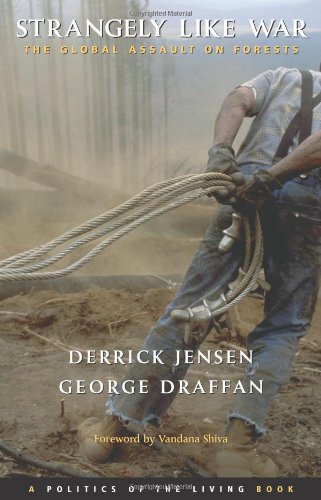 Strangely Like War: The Global Assault on Forests (Politics of the Living)
Buy Now

Although inferior to grasslands, forests still make pretty darn good carbon sequestration devices, and they have other important climate effects thanks to their involvement in the water cycle, as well as being hotspots of biodiversity. Yet forests are being destroyed in much of the world at nearly unimaginable rates. 140,000 acres of rainforest a day disappear under saw or crackling flame, 51 million acres a year.

Here's what you can do to help:

Renewable energy has come under renewed attention in recent years, but it is still desperately underfunded compared to fossil fuel energy sources.

Here's how to help:

I hope these tips have given you some ideas about how to directly promote carbon sequestration and the development of a post-carbon economy.

But don't forget the most important step of all: to reduce your carbon footprint in the first place!

Reduce, reuse, recycle. Bike or walk whenever possible. Turn that thermostat down in winter and up in summer. Eat locally grown organic foods... You know the drill. It does work, and it will save you money too.