Is the Two-Party Political System Doomed? A Look at Third-Party Movements

Although we're not talking about screwing in lightbulbs, many have asked just how many political parties it takes to run the country.

During each election cycle, the two currently powerful parties regularly sling punches in the political ring, yet it is increasingly difficult to get a handle on the core values of either party. Which raises the question of whether the two-party system in United States might be outdated.

With the Republican Party unable to decide how conservative a Conservative should be, and the Democrats similarly striving to out-liberalize each other, it’s no longer clear whether we have two distinct parties. However, what would our country look like if we had more than one political party with national clout?

Although written during the relative infancy of this country, Tocqueville's definition of what raises a political party to a level of national awareness seems prescient rather than preterit, given the emergence of value-driven political parties in recent years. The growth and penetration of the left-wing but value-based Green Party (originally the Association of State Green Parties, and not to be confused with The Greens/Green Party USA) was sufficient to make a negative dent in the national campaigns of the two major political candidates during the 2000 presidential election.

Do we have too many political parties?

How many political parties do we have?

The answer it appears, is there are too many to count.

Wikipedia, not an authority on any topic but none the less somewhat informative lists dozens of ‘third parties’ currently active in the United States. When one examines the list, Tocqueville's yardstick for measuring great verses small, "Great parties overturn society, small ones agitate against it . . ." is indeed defining.

Had Tocqueville known what the 21st Century American culture would include, he might have listed 'the absurd' as an extreme example of the reasons for which small parties rail against the establishment. Some parties on Wikipedia’s list (which the site admits is incomplete) are almost comical in nature, such as the Anti-Nebraska Party (excuse me?) and the Opposition Party (what do they oppose?). It’s one thing to be against something, but how about letting people know what you’re for, too?

Not too many years ago, the Pot Party (which, not surprisingly, exists to further the cause for legalizing marijuana) created a stir with its stand on things. Apparently having as much tongue in cheek as it did joint in mouth, party 'leaders' themselves took a humorous view of even their own platform. An old Web site of Fred Inthehills (the Pot Party's lukewarm and unsuccessful presidential candidate in 2000) gives the following as his campaign pledge (original spelling, grammar and punctuation remains intact):

"If I am elected I would first take a long vacation. That's a promise. Then I would call off the War on Drugs. I promise to take time out from my busy golf schedule to issue from the White House, daily movie reviews. Also, as the Pot Party standard bearer, it is my goal to bring back the $10 ounce. I am also offerring for sale, copies of my book, film, hats, t-shirts and bumper stickers. You may also be interested in my religious philosophy." According to one source, the biography of one former Pot Party leader listed, as a key accomplishment, that he won the "Bong of the Month Award" from High Times magazine.

Democracy in America: The Book 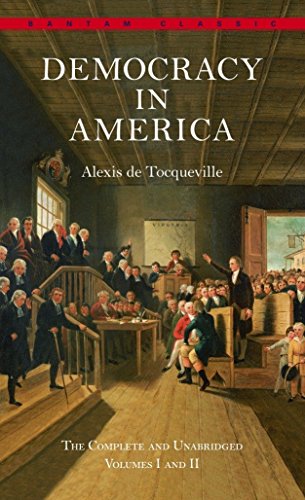 Democracy in America: The Complete and Unabridged Volumes I and II (Bantam Classics)
Buy Now

By far, the myriad of tiny political factions (of Tocqueville's small-party mentality) have not created substantive national waves nor captured political offices of any note. Among those parties that have made national news, those with 'liberal' values and viewpoints seem to have more cohesiveness and staying power than conservative groups that focus on making noise. This is not, by the way, meant to suggest I embrace one approach over the other; it's just an observation of recent decades in American politics.

The American Independent Party, which formed in 1967 and backed George Wallace as its presidential candidate in 1968, got nearly 10 million national votes during that campaign. Although its Web site has boasted in the past that "California's American Independent Party has been a ballot qualified political party since 1968, and is California's fastest growing political party," some say the AIP has lost its national profile and claim the state-level organizations are now affiliates of the national Constitution Party

As with the “Anti-Nebraska Party” and the “Opposition Party, it’s interesting to observe that historically, many of the AIP’s platforms address what it opposes rather than what it supports, which is consistent with Tocqueville's definition of small parties as 'agitating' society rather than overturning it. Third parties might raise their stock with voters if they offer less information what is wrong with the country and more ideas on how to correct its problems.

The Libertarian Party was founded in 1971 and boasts of being "America's third largest party." While its members have indeed held a number of local elected offices, some critics have claimed that many of these are obscure in nature, such as, “Town Recycling Committee Member” and further claim the party is waning in strength.

With the Libertarian Party presumably losing its political foothold, it's competitors (the Reform Party, the Independence Party, the American Independent Party and even the Pot Party) seem to reflect what Tocqueville calls 'small party' mentality. The Green Party, however, might offer the vision and values Tocqueville sees as a requirement for a party to have a permanent impact on society.

What does the future hold for American Politics?

A great party, according to Tocqueville, has the opportunity to " . . .sometimes save it (society) by shaking it up . . ." Of the 'great ones,' he says, "These parties generally have noble features, more generous passions, more real convictions, a franker and bolder aspect than the others."

In contrast to the oppositionist stance of the parties just discussed, the Green Party, while considered liberal, defines itself through values and uses positive language as it explains them. It has embraced such core values as "Social Justice and Equal Opportunity;" "Ecological Wisdom;" "Decentralization;" "Community-Based Economics and Economic Justice;" Feminism and Gender Equity;" "Respect for Diversity;" and "Personal and Global Responsibility."

The Green Party's Web site says it was formed in 2001, as a spin-off of the Association of State Green Parties (which existed from 1996 to 2001), but as it moves forward, it will continue to get criticism from those who oppose its core values as well as Democrats, who soured on the party when Ralph Nader’s campaign siphoned off a damaging percentage of votes from Al Gore.

In the online public interest journal, www.tompaine.com, a March 7, 2002 commentary by Sifry blames the Enron scandal on America's two-party system (a duopoly, he calls it). He alleges that the country’s two-party political system created an environment that fostered impunity. Sifry’s points are well taken; it can be argued that the two-party system creates barriers for alternative political viewpoints to be heard, and does not provide adequate checks and balances.

This would suggest that a strong showing in coming years by a third party with values that voters can identify with might not only redirect the, but could actually be successful in effecting change. While it remains to be seen whether the Green Party, or any other party, can make significant inroads in the current two-party system, the infighting we see in the two parties now in power certainly leaves the door open for that type of event.

Tell us what you think!

Is it time for a third party in the United States?