Talk By Dr James Gilligan On The Root Causes of Violence

Dr. James Gilligan is Clinical Professor of Psychiatry and for most of his career, has worked in prisons studying violent criminals. He had a great interest in trying to find out why these violent criminals behaved the way they did, and interview as many as he could. When he asked them why they had committed their crimes he always got the same answer; that they felt they were being "disrespected".

It seems that the only way these criminal could gain self respect was to use violence. As a number of criminals told Dr Gilligan, "I never got so much respect in my life, as when I pointed a gun in a dude's face."

It seems that all these criminals had horrendous childhoods. They were subjected to child abuse or were bullied and humiliated either by their parents or at school, until they felt, "dead inside" and no longer had any feelings. The criminals would even call themselves zombies or robots. Self harm was a commonplace with these criminals, as they would cut or hurt themselves to try to connect to their feelings. In not being able to feel, these criminals would have little feelings for others and no feelings of guilt or remorse for the people, they have hurt or killed.

Another aspect of most of these criminals is they had little education and were unable to find work. He makes a point, that by far the best program in prisons that prevent criminals from re-offending, after that got out of prison, was education. Prisoners that were given an education in prison were far less likely to go back to prison. This was because with an education, they were far more likely to get a job and people with education get far more respect in our society. Also an educated person is far more able to gain self respect for themselves than a uneducated one. Though he also makes the point, that schools were also the places where children were most likely to be bullied and humiliated, so schools can also create violent criminals.

He gives one horrendous account of one schoolboy spree killer who was continuously being bullied and humiliated by being called names like "pussy", "gay", "faggot", "geek" and "nerd". He was actually told that he wasn't a real man because he wasn't mean enough. So he decided the only way to make this stop, was to bring guns to school. He then went on a killing spree and when he was later put into juvenile detention he said he was now a lot happier in prison than at school. This was because in detention he was now known as a convicted killer and because of this, had gained the respect of his fellow prisoners as he was now seen as a "real man."

Dr Gilligan makes the point that punishment doesn't help these criminals at all, it only makes them worse. He also makes the same point about capital punishment, that being killed is no deterrent to violence criminals, as many feel so bad about their lives that they don't care if they live or die. He points out that this is also the psychology of suicide bombers, whom likewise, have lived lives of such terrible humiliation, they no longer cared if they live any-more.

He started a prison program called, "man alive" where he attempted to de-construct the male role in our society. He would have discussions with groups of prisoners about how they saw the world and how these ideas brought about their criminal behaviour.

In these long discussions these criminals began to realise how they had been brainwashed by the patriarchal society they lived in, to act out the role of a macho man. They then slowly began to realise just how stupid this role was, and how it was the cause of all the unhappiness of their lives.

Half of the prisoners he talked to were in jail for domestic violence and had said they had assaulted their girlfriends or wives because they felt she had "disrespected" them. They then realised how crazy this was, and in following this macho ethos, they had driven away the person they loved. (We see the same attitude in Islamic countries, where women are assaulted or murdered if they "dishonour" a man.)

This program had a powerful effect on the prisons where it was carried out, as these prisoners would talk about what they discovered to other prisoners, the result was the amount of violence in the prisons greatly decreased. These prisoners also educated the new prisoners coming into the prison and the prison guards, to this new way of thinking, of the stupidity of machismo.

Dr Gilligan makes a few other interesting points, like, that the USA has by far the highest violent crime rate in all developed countries. (5-7 times more than any other developed country). He puts this down to the very macho culture of the USA and the large gap between rich and poor. He then points out that violence is even greater in third world countries because of the macho culture is even stronger and the gap between rich and poor, is even greater.

Another point he makes, is that violent crime in USA in the 20 and 21st centuries has decreased under Democrat presidents and increased under Republicans. The reason is that Republicans tend to follow economic policies of high unemployment, which increases the gap between rich and poor, while Democrats attempt to try and decrease unemployment.

So it seems that another big cause of crime is high unemployment. Also, Republican politicians are more likely to cancel programs like education for prisoners, than Democrat politicians, as well as introducing programs to punish prisoners, which only make them more violent. He makes the point that the USA states where the death penalty was re-introduced and carried out, the murder rate increased. This is because men who are driven to murder, have little interest in whether they live or die.

To sum it up. It puts the blame for violent on the strong machismo culture. This is made worse if there is a large gap between rich and poor. If we look around the world where women treated like slaves, we also see a great increase in poverty and violence. Where women have more power and respect, the rate of poverty and violence also decreases. So the more power women have, the more equal, and peaceful society becomes. As I have explained in some of my other articles. This is another reason, why we need women ruling our world. 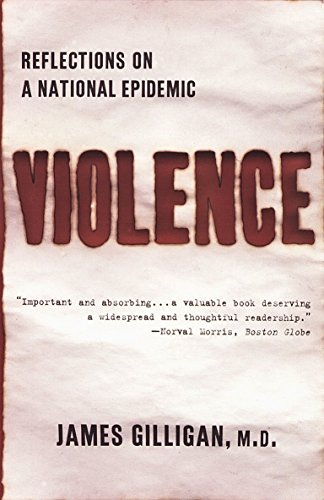 How men are trained to kill

On Killing: The Psychological Cost of Learning to Kill in War and Society
Buy Now