American Dream: Why is the American Middle Class So Damn Poor?

AND SO HAS AMERICAN EDUCATION; MANY BELIEVE this is no coincidence. A recent analysis from :TheUpshot of the New York Times has shown that in 2010 the American Middle Class, meaning the median income in America is either tied with or behind Canada; the expectation is that today, it is well behind Canada. Below is an excerpt from a table prepared in :The Upshot analysis:

America Is Quickly Falling Behind Economically

WHICH COUNTRY HAD THE HIGHEST AFTER-TAX INCOME?

On top of that, a recent 685-page economics tome by French economist Thomas Piketty, analyzed over 100 years of tax records from France, Germany, the US, the UK, and Japan determined that the US, while not quite there yet, is on the trajectory that will replicate late 18th century French economic inequality, just before the Revolution that led to the top 1% having their heads chopped off. Piketty's book, Capital in the 21st century, was released in February 2014 and immediately sold over 200,000 copies and has captivated Wall Street, the cream of Washington's policy makers, and think-tankers.

His fundamental conclusion is that the "rich really are getting richer" and that "wealth doesn't trickle down, it trickles up" (something I have been saying all along; he just proved it). Further, he firmly believes his data shows that his 18th century metaphor will become reality if the inequality if left unchecked.

Piketty found that in the US, the only times inequality decreased was during war, depressions. or when government directly intervened like with the New Deal and the Marshall Plan. He takes US tax policy to task blaming it as being part of the inequality problem. Ironically, one reason the graduated income tax was started in 1913 (progressive era) was to redistribute income or "level the playing field" as it were. But, over the intervening 100 years the Conservatives generally won out in taking the "gradients" out of the "graduated" thereby transferring the wealth back to the wealthy; especially in the last 30 years. The last tax cut by President Reagan effectively made the income tax almost a flat tax with only a small nod to the poor.

One thing I wasn't aware of that Piketty pointed out is that the idea of a robust American middle class is a recent phenomenon and has occurred basically during our lifetimes; from the 1950s to the 1980s. After that, it went into decline. Prior to the depression, there were never that many good years in a row for a middle class to establish itself given that a 2008-sized recession or larger occurred, on average, every 5 to 6 years!! In fact, the longest period between recessions of any kind since 1789 to 1940 was 5 years!!!

Like the 2008 Great Recession, most of the downturns only affected the bottom 90% of income earners; it was only in the five or six big depressions where the top 9% felt the pain as well; the top 1% was rarely troubled by these momentous events.

TRICKLE UP not TRICKLE DOWN 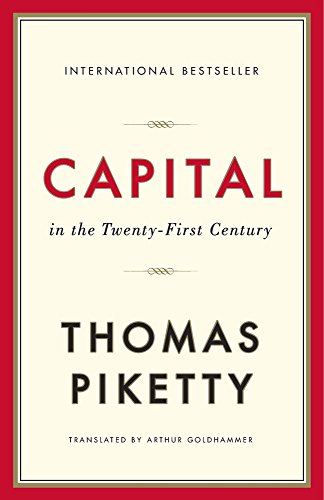 What Did These Other Countries Do Right That America Did Not?

THEY INVESTED IN EDUCATION. THEY TRAINED IN NEW SKILLS, AND THEY REDISTRIBUTED WEALTH, that is what they did. After the 2008 Great Recession begun by America which then spread around the world because those financial systems were as complicit in making bad loans as our own investment and commercial banks were, Europe and Canada invested in their education system. America, on the other hand, ended up doing the opposite even though President Obama tried, through his stimulus program, to prevent the underfunding of America's educational system.

He knew most of the State and local governments would education as one of their first austerity moves; all he had to do was look back in history to understand that. His effort paid off for a couple of years but then the money ran out, the economy had not recovered because of the political headwinds he faced and the States cut education big time.

Except after the Great Depression, around 1996 with the new Welfare Reform Act, and then again in 2009 with the stimulus, America has never had a real interest in training workers displaced either due to economic downturns or changes in technology for jobs that required new skills; it is that old "rugged individualism" thing rather than "what is good for America thing", I suppose. Lucky for Canadian and European workers, their governments don't take that view and they help their workers learn new skills. Consequently, as of today, the bottom half of their income earners earn more than our bottom 50%.

Finally, they understand that capitalism, left unchecked leads to income inequality, so they do something about it (yes, most of Europe and Canada are essentially capitalistic countries, I think only Norway is still socialist in terms of economic systems). They use their tax system to turn the "trickle up" effect that Piketty determined actually occurs into a true "trickle down" which conservatives wrongly claim happens.

It is the combination of these factors that you will see, if America does not change its ways, the next column in the table above to contain only the top two rows with the name UNITED STATES.

This Is Not A Chance State of Affairs

IN FACT, WE ARE DOING IT TO OURSELVES ON PURPOSE! Well, that is sort of stupid isn't it; shouldn't we just stop? Unfortunately, it isn't that simple. Like the climate change deniers, the same group of people and politicians deny, regardless of what the facts show, that the economic system their philosophy tells them to adopt can possibly have such a terrible outcome. It never has before, they say.

Well, yes it has, but they won't believe that either, for there is always a way to rationalize each individual example of failure away. The problem is, they have to rationalize 25 failures away, if you count the 2008 Great Recession. There were 24 major recessions between 1785 and 1929 that need explaining as well. (These weren't the only ones, but the others were not caused by economic policies) To counter this criticism they point to the great economic boom since America was born because of their philosophy. Well that is not quite true either.

Yes, there were periods of great economic growth, between recessions, depressions, and wars; but most of it was generated by the push West and then the expansion into those territories. So long was there was new land to conquer or settle, the economy could expand. It wasn't until the West Coast was fairly well settled that the American economy started feeling the same constraints we see today. Because of this ability to expand, there was a natural safety valve when the economy went south, people moved West.

As a result, it wasn't until 1929 when people and policymakers understood there was something wrong with the way we "always did things economically" and FDR and John Maynard Keynes sent us down a new path; which worked much better. But time passes, people die, and memories fade; but ideas don't. The ideas of "a man is an island", "the rugged individualist", "big business knows best", "the only good regulation is a repealed regulation:, and "government is bad" gained popularity once more as did the failed economic system of laissiz-faire or Classical economics. By 1981, we had forgotten the need for income equality and by 2001 all the lessons learned from 1929 were relegated to the trash heap as they interfered with business as usual. Seven years later, right on schedule came the Great Recession of 2008.

And because, as previously mentioned, we did all the wrong things during the recovery, e.g., not enough stimulus, not enough support for education, not enough training of new skill sets, not returning to the Clinton tax rates (after recovery happened), and the opposition Party opposing all efforts of the Party in power to institute a recovery plan, we get a report in 2014 that Europe and Canada has pulled ahead of half the income earners in America.

THINKING ABOUT POLITICS, DO YOU FIND THAT YOU