Who Is More Credible Adam Schiff or Donald Trump?

I watched Donald Trump demean those he feels threatened by and it doesn't take him long to go after them.

Prior to getting involved in politics, his education took him to Stanford and Harvard Law.

One of his early cases after he began practicing law what that of Richard W. Miller an FBI agent who was selling information to the Russians. On October 3, 1984, Richard W. Miller was arrested along with Russian agents. Financially strapped, excommunicated from the Church of Latter Day Saints for committing adultery; he began using his position to make money. He charged investigators $500 per search of the data base for information and then began selling classified documents to Russian agents for $50,000 in gold and $15,000 in cash. It was also believed that he was having an affair with one of the agents. In the end and after 3 trials, Richard W. Miller was sentenced to 13 years in prison

Adam Schiff's experience with Russian collusion goes back to mid 1980's. And for the last 5 years as part of the House Intelligence Committee, he has had much knowledge of what foreign agents are doing in this country and his own responsibility to this country.

As he said about the Mueller investigation and how it pertained to the President of the United States; "At the end of the day we need to make sure that our President is operating not in his personal best interest and not because he's worried about what the Russians might have, but because what he is doing is in America's best interest."

Well, it would be nice to be able to find something credible about Donald J. Trump, although it is very difficult.

Donald J. Trump was born in NY. He was a reality tv actor. Loved the media, from talk shows, radio shows to guest appearances in movies and television shows. He wrote or better yet, he had someone write a book for him called the Art of the Deal. In it he talked about how he uses and manipulates people by going after their insecurities and making the deal. In reality, Donald J Trump is a terrible business man who's father had to bail out continuously. In a decade, he lost over $1.17 Billion dollars, had many business that he filed bankruptcy on; his casino's, his airline dream, his Vodka company and the list goes on.

Trump claims to have graduated at the top of his class at Wharton School; which was proven to be false and added to the question of how he was able to enter Wharton as his high school gpa was under 2.

In the little over 2 years that Trump has been President of the United States he has told over 10,000 lies. He has filed lawsuits to keep Americans from know anything about his finances, witnesses to his collusion or obstruction to come forward after having been sent a subpoena.

Trump's rallies are famous because of the many faces of Trump. From pointing out the media in the crowd to bully them and discredit them. Making fun of the handicap, pretending to be choking because of something he doesn't agree to and flat out putting out that angry look.

No matter what Trump does, he will never be Presidential. He demeans people when they don't agree with him as he put it; "Nobody disobeys my orders".

Most recently he began to attack Adam Schiff, Chair of the Intelligence Committee over the Muller Report. At his latest rally, he referred to Adam Schiff as "Little pencil-neck Adam Schiff". Then without any proof or merit; "Congressman Adam Schiff, who spent ten years unlawfully lying and leaking, should be forced to resign from Congress".

In reality, Trump is a bully when someone doesn't agree with him and he's a coward when it comes to getting it done. He calls on his administration and allies to do his dirty work.

The conclusion to this matter: Do you trust someone who's life history has been to stand up for the laws of this country or for someone who breaks the laws and tries to cover them up with bullying and lies, over 10,000 of them?

Who is more Credible? 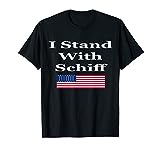