Twitterers Give Us The Scoop on Eco Friendly Poop

Worldwide, millions die from illnesses caused by unclean water (caused by lacking sewerage systems). In Africa, millions starve who could not grow food because of the lack of fertile soil. In Latin America and North America millions of trees are taken from our forests so that people can use the preferred fluffy toilet paper. More than 21 billion disposable diapers are send to landfills each year in the US alone. In Sri Lanka elephants are being killed because they have no use to the local farmers who find them a nuisance, while their dung could be an alternate income source for those farmers, and help spare their lives.

Imagine what we could accomplish if we were more responsible with our poop, and more innovative with the poop of all animals. Perhaps we could improve the current state world hunger, health, sanitation, animal rights, water quality, deforestation, renewable fuel, and more.

Poop at the Zoo: The Bronx Zoo's New Eco Restroom

Why do we flush our poop with perfectly good drinking water and then spend money, energy, time and effort separating the two again? (often unsuccessfully)

We have a lot to learn from poop! Researchers recently found ten colonies of Empire penguins in Antarctica that they previously undiscovered. They did this by accidentally spotting the poop stains on the ice visible in satellite images. Since the penguins stay in one location for eight months of the year, the ice there can get pretty dirty...and by dirty I mean poop covered.

So a glimpse at some poop can help researchers learn more about the Empire penguin and to help protect them. 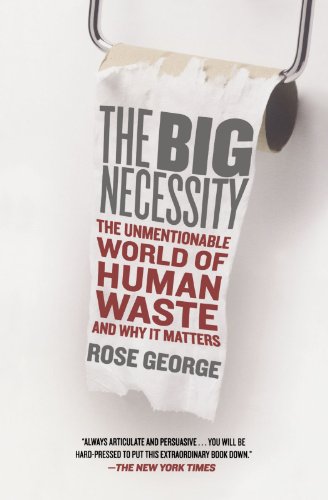 The Big Necessity: The Unmentionable World of Human Waste and Why It Matters
Produced behind closed doors, disposed of discreetly, hidden by euphemism, excrement is rarely out in the open in 'civilized' society, but the world of waste - and the people who deal with it, work with it and in it - is a rich one. This book takes us underground to the sewers of Paris and London and overground, to meet the heroes of India's sanitation movement, the Japanese genius at the cutting edge of toilet technology, and the bio-solids lobbying team. With a journalist's nose for a story, and a campaigner's desire for change, Rose George also addresses the politics of this under-reported social and environmental effluent, and the consequences of our reluctance to talk about it. Witty, serious and original, "The Big Necessity" proves that excrement doesn't have to be - and shouldn't be - a dirty word.
Buy Now

While we may not be able to reduce the poop, we can learn to reuse and recycle it.

One man's poop is another man's alternative energy source.

Elephant dung can be turned into paper! The fiberous nature of elephant dung makes it ideal for paper production and some companies, such as elephanddungpaper.com are using the profits from the sales of such paper to help elephant conservation efforts. It's a win-win!