The Non-violence Is A Philosophy of Life

All wise men down the ages have preached the doctrine of love and non violence. Zoroaster, Buddha, Mahavira, Christ, Nanak primarily emphasized a moral code that gave due status to non-violence.

But what does the word ‘non-violence' mean in simple terms? To what extent can and should non-violence be exercised in daily life? And is it not true that the world today is in dire need of non-violence?

Non-violence is a conception based on the fundamental goodness of man. In the fight for what is right and good - freedom, morality, justice and equality, violence must be evaded.

All these are to be acquired by avoiding use of physical force. One must avoid imposing pain on others to win one's own goal however true and justifiable it may be.

Evil must be opposed in a calm manner and not through violence in thought or action. For almost always violence begets violence - and there will be no end to it.

The path of non - violence calls for a great amount of courage on the part of the person practicing it to achieve the best of goals. It also calls for guts and a lot of self-sacrifice.

Thus non-violence, asMahatma Gandhi said, is not the weapon of the coward but of the strong.

Just like other compassionate principles, non-violence fails to make sense once you take it to an extreme. It is not achievable for man to exist at all if he is to guarantee that he does not harm or injure a single animal, plant or micro-organism throughout his life.

We breathe - and in the mere act of breathing we kill a number of germs and bacteria that cannot be seen by the naked eye. We walk - and the mere act of walking crushes innumerable tiny, microscopic organisms that proliferate on the soil.

Moreover, injury by itself need not be solely physical in nature; it can be emotional and mental as well. There are no standard and practicable measures by which we can gauge the extent to which an act may cause mental and emotional harm.

Mahatma Gandhi is measured the apostle of non-violence. Truly, he lengthened the perception so that non-violence as a principle acquired a totally new meaning and breadth.

For him the path of AHIMSA (Non-violence) was the only way to attain freedom and truth which was the supreme authenticity for him. He clarified how ahimsa was an energetic force and not simply a term passive in its meaning.

The struggle through ahimsa was a rightful struggle that demanded a lot of merit and virtue on the part of its followers. Ahimsa, for Gandhi, was not weakness.

Gandhi encouraged the use of ahimsa so that its practice on an individual level might finally increase its implication for the nation as a whole. Only individuals compose a nation.

The efficiency of the message of non-violence advocated by Gandhi can be measured from reactions all over the globe. We have self - perceived students of Mahatma Gandhi in leaders like Aung San Su Kvi and Nelson Mandela.

In the Present times, it is violence that has surfaced as one of the most general causes of human suffering. The search of material benefits has resulted in growing controversies between individuals, groups and nations.

New forms of violence have thus appeared. Highly sophisticated and deadly chemical and nuclear weapons have opened up ways to impose an utmost of devastation and damage.

In truth, one ought to blame the modern ways of living for the violent predispositions that have taken strong roots in mankind. There is less of tolerance, perseverance, true courage, commitment and absolutely no sense of values at all.

Man today is lost; and wandering souls can be easily deceived in the name of anything. Violence has grown to such an extent today that it has almost acquired some kind of authenticity.

One fears that the growing violent mind-set will eventually wipe out mankind as a whole. The world is to a great extent in need of non-violence as a way of life, to proliferate the gospel of love, brotherhood and peace.

Man must awaken and understand that the world of violence in which he is living can blow up on his face at any time. Before time runs out, man must recognize the stupidity of indulging in violence and give it up.

Only the path of non-violence can truly offer mankind release from all ills and bring about harmony in the world. Only non violence can restore sanity around us.

"Non-violence is the greatest force at the disposal of mankind. It is mightier than the mightiest weapon of destruction devised by the ingenuity of man." 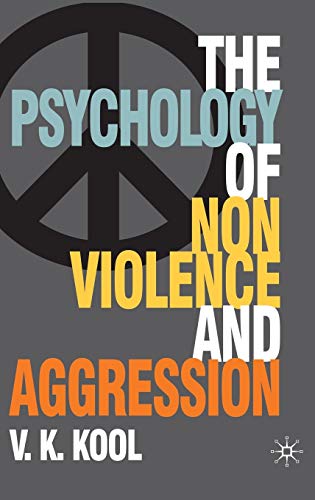 Pschology of Non-violence and Aggression
"This book is "the missing link" between the studies of nonviolence and the field of psychology...this is a valuable source of deep thinking to understand the psychological dimensions of peaceful behavior. Kool takes the reader through the main schools of psychology and discusses, with deep knowledge, their relevance for understanding how nonviolent behavior can be understood as a human reaction in certain situations. For psychologists, this volume opens doors to the lesser known world of nonviolent activities in social conflicts. As a complement to the enormous number of works on aggression arld violence, Kool offers a focus on the constructive, peaceful, and creative reactions for humans in conflicts. The problems of understanding and measuring nonviolence are discussed in detail, and several methodologies are examined.
Buy Now

Ahimsa: Non-Violence
Ahimsa Non-Violence explores the traditions of the Jain religion. Jains are an extraordinary people who put into action their deep belief in non-violence. Their adherence to ''Ahimsa'', non-violence in all thought and deed, means that the Jains are not only strict vegetarians but take an active humanitarian role in caring for all animals. Mahatma Gandhi adopted Ahimsa as his fundamental rallying cry, as did Buddhism itself. Ahimsa Non-Violence is an intimate look at a philosophy that offers hope and peace for the rest of the world.
Buy Now

Non Violence is a philosophy and strategy for social change that rejects the use of violence. As such, nonviolence is an alternative to passive acceptance of oppression and armed struggle against it. Practitioners of nonviolence may use diverse methods in their campaigns for social change, including critical forms of education and persuasion, civil disobedience and nonviolent direct action, and targeted communication via mass media.

From Gandhi (1982) is a biographical film about Mohandas ("Mahatma") Gandhi, who was a leader of the nonviolent resistance movement against British colonial rule in India

The Non-violence Is A Philosophy of Life by sukkran is licensed under a Creative Commons Attribution-NoDerivs 3.0 Unported License.
Permissions beyond the scope of this license may be available at http://www.squidoo.com/non_violence.

Your Comments On Nonviolence