Getting Along with Others | When Not to "Be Yourself"

Why "Be Yourself" May Be a Bad Idea

"I don't feel like I even know you anymore!"

"I didn't see what she was really like until it was too late."

"He sure had me fooled."

Relationships - both romantic and platonic ones - look much different in the beginning than they do later. We all recognize that they'll change as time passes, but it's hard to predict exactly what those changes will look like. Quite often, we regret not picking up on subtle cues about what another person was "really" like.

If only we could know which traits are genuine and which are the effect of trying to make a good impression! Authenticity can lead to better communication, but it can also reveal your shortcomings if you're not careful, so we tend to put our best face forward. Although this is natural, it also can lead to misunderstandings and later regrets.

While this article won't help you choose better partners, it will show you how you can put your best foot forward without putting yourself at risk.

Raise your hand if you like being deceived.... HUH? Nobody has raised a hand? Naturally. We don't want to feel manipulated or out of the loop on important matters. Still, everybody lies to some extent. Even you. Even if you believe you're the most honest person alive.

In fact, you might think, "Honesty is part of my problem. My mouth gets me into more trouble than you'd believe!" I'd counter that with a reminder that you choose what not to say - in effect, you omit information sometimes in order to protect other people's feelings or avoid a problem. At work, for instance, you wouldn't blurt out that your boss is being an unreasonable jerk when you're angry at him or her.

"That's not really a lie," you say. And I'd agree with you. It's not deception for the purpose of benefitting yourself at someone else's expense. Yet you withheld some degree of your thoughts. You were not fully genuine about what you thought.

Authenticity is what those two words - be yourself - are talking about. If your actions are in line with your beliefs, then you're being genuine. Authentic. If not, then to some degree you're wearing a mask. Taken to an extreme, you might even be called a faker.

It's not that you should be phony. You shouldn't. But too much honesty can take you down some slimy tunnels. If you want your relationship to last, it's vital to learn when to be yourself, and when not to.

Let's look at one of the characteristics that is universally attractive: Confidence. We're drawn to people who believe in themselves. It shows in their words and their actions. We strive to feel confident ourselves, and when we succeed, we're at our very best. We're happier. We accomplish more. We get along with people easier.

Confidence is a double-edged sword. It's the reason "be yourself" is both the best and the worst advice you ever got.

When people are too confident of themselves without having proven themselves in some way, it's usually because they want to hide their insecurity about something. To an outsider, they may appear cocky, arrogant, reckless, or defensive. And this is where relationship matters get tricky.

You see, confident people with a great sense of self-esteem still have little "isms" that leave them feeling insecure. And when they feel insecure, they may react exactly the same way as a person who has low self-esteem to begin with - by adopting a confident attitude. This is what I'll call "protected mode" because it protects us from feeling hurt.

Unfortunately, our defense mechanisms can be so ingrained and automatic that we kick ourselves into that protected mode without ever realizing we have done it. For example, I might be generally confident about myself, but have a fear of being unattractive to my partner. When I notice him looking at another woman for a few seconds too long, I kick into protected mode because it would just hurt too much to think my partner thought me ugly.

First, I have an automatic thought that he may find me less attractive than her. I may be aware of that thought, but it can jump to another thought so quickly that I don't recognize the first one. Now, instead of saying, "I'm afraid I don't measure up," I'm thinking, "He's being rude to me."

When I voice my displeasure, he goes through a similar process. Instead of recognizing that his immediate thought was, "I have a fear of letting my partner down," he leaps to "But I wasn't trying to be rude." He gets defensive. I see his defensiveness and feel more confident that I'm right, so my opinion gets even more entrenched. Let the fun begin...

Was I being myself? I sure was. I responded to a triggering event the same way I always have.

But the bigger question is: Was I authentic with my partner? I certainly was not trying to deceive him, but I didn't tell him what I was really upset about. Heck, I didn't recognize it myself. I felt very confident that I was right when I claimed he was being rude, but was I actually correct?

If I'd simply told him, "I felt afraid that you don't find me as attractive as you found that woman," the entire conversation would have been different. My loving guy's response would still have been to protect his own fear of letting me down by giving me the reassurance that I needed to feel attractive. (And you can bet he stopped looking at her at that very moment!)

Building intimate trust is based on being able to show your vulnerable side to your partner. That's where the authentic self comes out. But we also know that showing vulnerability - especially to a partner who isn't fully trustworthy, can hurt us. Isn't that why we learned that protected mode in the first place?

When you're embroiled in an argument with your loved one, ask yourself, "Am I being authentic, or am I fooling myself even though I feel confident of my opinion?" With practice, you can learn to hear those first thoughts instead of letting your protection mode introduce unnecessary arguments to your relationship.

I'll be discussing more on authenticity, vulnerability, and trust in many articles to come, so stay tuned!

Kathy Batesel is a freelance writer available for custom projects. Contact Kathy at her HubPages profile to inquire about your specialty needs. To learn more about authenticity in relationships, consider checking out these books: 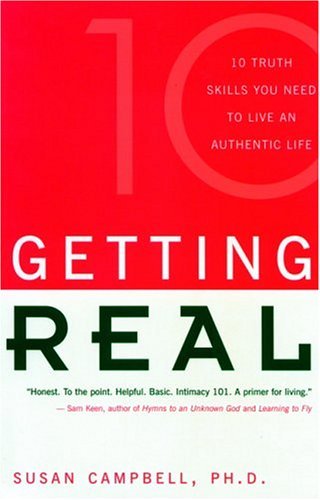