Jealousy: How to Defeat the Green - Eyed Monster

"O, beware, my lord, of jealousy! It is the green-eyed monster which doth mock the meat it feeds on". - William Shakespeare, "Othello"

Jealousy is a sign of "insecurity" over something that is already "yours".

It’s a fear of abandonment or loss but most importantly it is a fear of loving someone more than they love you. No one wants to be a fool. It’s about you and not them.

“In jealousy there is more self-love than love.” ~François, Duc de La Rochefoucauld

Jealousy often occurs when others initiate contact with your loved one. For example a man who is dating a beautiful woman may not like how she “politely rejects” men that hit on her. Ideally he wants her to be rude to everyone but him. He may want her to wear certain clothes only when she is with him.

The rest of the time he wants her to wear clothes he feels will not draw unwanted attention/competition. Some men go as far as to discourage their women from displaying their natural easygoing upbeat personalities. A woman with low self-esteem could easily find herself walking on eggshells in her attempt to avoid arguments or fights with her man. If you have to "change" in order for your mate to be "happy" then you are with the wrong person. Everyone is looking for someone who will love and accept him or her for who they are.

“Jealousy, that dragon which slays love under the pretense of keeping it alive.” – Havelock Ellis.

There are those who believe without jealousy there is no love.

They see the anger in their significant other as a sign they are in love with them. Others believe if they can incite jealousy in their mate it will be a “wake up call” for him or her to begin to treat them better. If your partner does not naturally value you and your relationship then you are with the wrong person. Mature adults have no need to play games of manipulation to get what they want. They simply ask for it.

Watching someone fight over you, punch holes into a wall, break or throw things, yelling, cursing, or crying may be some people’s idea of foreplay before having great make-up sex but it’s totally unhealthy. No emotionally secure person needs that kind of drama.

While John and Amy are driving home from a party his phone starts to ring. He looks at it and then shuts it off. After a couple of minutes of silence Amy asks, “Why didn’t you answer your phone?” John replies by saying. “I’m not in the mood to talk while driving.”

A couple of minutes go by and Amy calmly asks, “Who was it?” John blows up. “I wish you’d stop being so damn paranoid! If we don’t have trust then we don’t have anything!” Amy lets her seat back and closes her eyes as if going to sleep.

It’s not uncommon for someone who has been asked a question they don’t want to answer to accuse the asker of being paranoid, insecure, or lacking trust in their mate.

Quite a few people are of the belief that trust should be “automatic” until proven otherwise. This is a conman’s dream! The cheater’s mentality is “If you trusted me you wouldn’t have busted me!”

Only after honesty and integrity have been demonstrated over time should someone begin to trust. You have to be (given something) in order to trust or distrust. In fact the more a person loves you the more likely they will want to reassure you. Assuming one is not asking a person to account for every second of their day.

If you are in a relationship where you are afraid to ask questions from time to time then you are involved with the wrong person. In a healthy relationship both people are encouraged to speak their minds. Honest communication trumps silence any day.

Another form of jealousy is envy.

In its extreme form it has caused some people to devise schemes to steal from or find ways to supplant a person they consider to be a “rival”. Ironically the person who is envied is often unaware of the hate aimed towards them especially if it’s coming from an acquaintance. Unlike jealousy which is loud, envy is silent. Life is a personal journey. Stop comparing yourself to others and don't fall into the vicious trap of trying to keep up with "The Joneses". There will always be those who have more than you and others who will have less than you.

“Envy is the art of counting the other fellow's blessings instead of your own.”

While jealousy is often the result of an overactive imagination or a perceived wrong, betrayal is a fact. Expectations were agreed upon or implied. Promises were made or vows exchanged. Someone breaks the trust. Most likely they were caught in the act or soon afterwards.

You can’t stop a person from being jealous or envious of you!

The only person you have complete control over is yourself. If the person you are dating/married to is very attractive you can't expect other people not to notice she/he is attractive also.

It’s like getting a job at a great company and learning afterwards people are still emailing and faxing their resumes. Are you going to get upset with the company?

Neither you nor your mate has any control over other people.

Lets face it if you have anything that's "worthwhile" other people are going to want it too! In order to keep "your job" you have to continue to do your best work. A jealous person is looking for a lazy way out. They want to "relax" or feel secure in the knowledge they don't have to continue to give their best without fear their mate will wander. However if you are not performing well at your job you are likely to be fired. The same holds true in your relationship. You provide your own "job security" by always doing your best. Just as you cannot shut down your company to keep others from applying for your position, you also can’t lock up your mate. Competition will always exist! That’s reality.

You must develop the habit of thinking before reacting to any given situation.

“Anger is the mask that hurt wears.”

“Why does this bother me so much?” “Is he/she deliberately trying to hurt my feelings?”

Asking yourself questions before you react can help you to put things in perspective. Naturally if you decide someone is intentionally setting out to hurt you it is probably wise to avoid having anything to do with them. It's your obligation to love yourself by looking out for yourself.

With the abolishment of slavery it is both immoral and illegal to own another human being. Any attempt to monopolize a person’s time or thoughts is a selfish act. Everyone is entitled to spend time with friends, family, and co-workers in a free society. Emotional security comes from having a network of people that support your endeavors. They are there to cheer you on and also help soften your fall.

A jealous person tries to separate their mate from as many people as possible. No one wants to be smothered nor controlled. Love grows and jealousy kills.

You don’t negotiate for love and affection. These things are given freely.

Be yourself. If someone is behaving like they don’t love and appreciate you assume they don't. Actions speak louder than words! Avoid the drama and move on! Life is short!

“The jealous are troublesome to others, but a torment to themselves”-William Penn 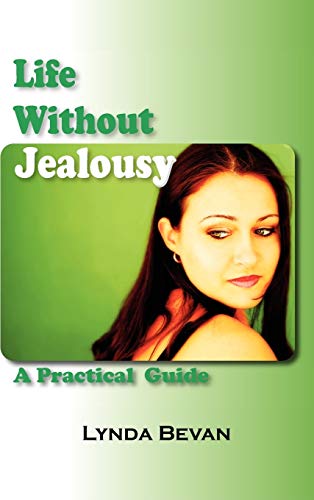