End of the World

When your spouse betrays you, it comes as close to death as you can get.

These are often the remarks that drip from betrayed lips.

That man who 'had to work late', or 'help a friend move', or go to the game with Bob, is dead. He is dead, because the man standing before you wasn't working late,or helping a friend, he was rolling on soiled sheets with Slutina.

Hence that man you trusted whom you believed, is dead. Dead and replaced by someone else wearing his body.

This is the core of adultery.
Death.

Hence react to adultery as a death. Mourn the man who 'died'.

Most women don't do this.
They bounce from anger to hysteria, from depression to thoughts of murder. They scream, cry, whimper, curse, they are caught in a maelstrom of emotions, and nothing makes it better.

By avoiding that useless emotional tsunami and going for grief and mourning, one actually is able to escape the pain easier, and with less baggage.

The fact that a body resembling your husband is wandering around as a memorial is not to remove the grief of death.

Let yourself feel the death, then with a clear head, decide what YOU are going to do.

Blindsided By His Betrayal: Surviving the Shock of Your Husband's Infidelity (Surviving Infidelity, Advice From A Marriage Therapist Book 1)
Buy Now

.Now it depends on where you are in life and what your life is, what comes next.

Let us be mercenary...if you can divorce him and get everything, go ahead.

If you are going to walk out in your stocking feet, unless you are very young and the house is a wreckage, think before you act.

Many times women lose more than they bargained on with divorce. Don't be one of them. As Ivana Trump said, 'Don't get mad, get everything.'

When you can get everything, and make it obvious, certain things happen.

I can list cases in which hubby was anxious to dump Wife for Slutina but when Slutina learned she is not getting the house, she dumps hubby.

Men lie.
You know that for a fact.

Consider the same number of lies he told you, he told her. Hence Slutina is living in as much of a fallacy as you are.

Thinking she's getting the big house, the car, the property and learning that everything she sees is virtually yours, chases her faster than an M-16.

Get legal advice and focus on your 'dead husbands' property.

Let us look at the situation.
He has betrayed you.
What do you want to do about it?

Some women launch affairs. They do the tit for tat adultery thing. Some women consider they have carte blanche. They can do anything they want.

They don't have to 'focus' or 'work' at their marriage, they can focus on work. Thi often leads to great advancement in their careers.

As your husband is dead you are virtually a widow, and so you can decide if you want to get involved with another man, or even this man who looks like your husband...or not.

The focus is on YOU. 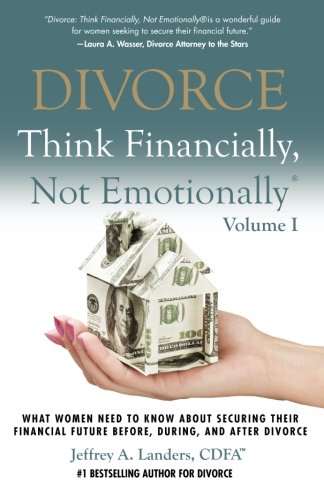 DIVORCE: Think Financially, Not Emotionally® Volume I: What Women Need To Know About Securing Their Financial Future Before, During, and After Divorce
Buy Now

Forget the 'staying together for the sake of...' that has never worked.

The kids know what is happening. Either they think you are an idiot, hate him, or play one parent against the other.

It is better to have a clean break and a reorganisation of the child's life than to drag through in a fraudulent imitation of a marriage.

If you can send the kids to stay with someone while you work out the new arrangements, do it.

You might chose to live separate lives but remain under the same roof.

You might chose to leave him. He might run off with Slutina, there are many postulates. But the key point is making the best life for YOU.

When you deal with adultery as a kind of 'death' you readjust your life in a more beneficial manner.

You don't ask; "What is wrong with me that he cheated?"
You don't need details.
Your husband is dead, and you pack up all those emotions that belonged to him, all that love and trust and pack it away, just as if he died.

The person in his body is a stranger. You don't know him. Keep him at arm's length. Decide what you want to do.

Say nothing about your plans, in fact, if he thinks you are 'adjusting' and 'will take him back' at some near future it is better for you.

Get legal advice, get proper counseling and make a 'Me' decision. Not a 'family' not a 'kids' but a Me.

Me decisions are the most important.

If you have to go away for a few days, do so.

Adultery destroys your world, It isn't a nose bleed. It needs to be understood, and dealt with in the most useful manner.