What is a Homosexual, LGBT Labels

When I was growing up it wasn't until my teens that someone actually told me what homosexuality meant. I remember having feelings for those of my same sex, and also remembered that the overall reaction to this type of thing in the late 1960s and early 1970s was not a positive one (the word "queer "clearly was not a term of endearment yet). A friend of mine, Sherry, who was a little older than me, had it all figured out and was willing to share what she knew. Sherry was like a big sister and very protective of me, never once violating that sacred position of mentor. Hearing her say the words that a homosexual was simply a man or woman whose feelings of sexual attraction are for someone of the same gender was a revelation.

Homosexuals come in every shape and size, and reside within every walk of life, and live with all manor of family. So, yes. This means you know and probably love or care about someone who is a homosexual right now. You might not be aware that a person you know is a homosexual, because even in 2011, a large number of homosexuals keep that very fact to themselves.

What is a Homosexual?

Books to educate you about LGBT Youth Issues 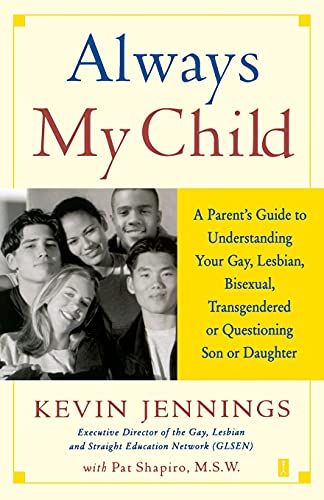 Always My Child: A Parent's Guide to Understanding Your Gay, Lesbian, Bisexual, Transgendered, or Questioning Son or Daughter
Buy Now

It Truly IS a Human Right!

Why Do Gay People Call Themselves Gay

Gay people are simply homosexual people: Gay is a synonym for homosexual. The word has been used by gay people since the late 60's. Gay men and women at that time took the name gay and created slogans like "Gay is Good", similar to our more current slogan of "Gay Pride." The word gay has a less clinical feel than the word homosexual, and was seen more as a positive term by the gay community. I read that the word gay was used as far back as the 1920s as slang for homosexual, exclusively among the gay community. The word was used to secretly tell an insider that a club or a dance hall was frequented by homosexuals. To use a code of sorts, the gay community would say that a place was a "gay place" or that it had a "gay crowd." Outsiders simply took this to mean the place was "fun" or "happy", remaining clueless that the word was code.

What is a Homosexual?

Human Rights Campaign Home Page - Our Rights Should Be Equal!

What is a Lesbian?

A lesbian is a female homosexual. A woman whose primary sexual desire is towards other women. Like gays, lesbians are found in all walks of life, and in a all sizes big and small. Some are very feminine, some more tomboyish, some very masculine; just like any other category of female on earth.

The word lesbian is from the Greek island that is called Lesbos. In the 16Th-century a female teacher who was named Sappho, built a school of worship for her intense interest in poetry that celebrated the love between women. Over the centuries the word lesbian, that originally simply meant someone who was from Lesbos, came to mean a woman who, like Sappho and those who shared her island, loved other women.

WHAT YOU THINK REALLY DOES MATTER!

Could you have unconditional love for your child if he/she told you they are gay?

What is a Bisexual?

A bisexual is simply a person who has feelings of sexual desire for both men and women. This definition is not all together accurate. Human men and women are a complex entity and to say that someone has equal attraction for both sexes would be inaccurate. More typically, a person will have a stronger attraction for one sex over the other, and on occasion will develop an attraction for the sex that is not their dominant sexual draw.

Bisexuals are NOT just gay people who are afraid to admit that they are gay. It is a huge misconception to say that bisexual people are involved in relationships with both men and women at the same time. Some may be more apt to live this kind of sexual life, however it is more likely that a bisexual person who is in a relationship will have only a single partner at any given time.

Being bisexual is NOT the same as being "on the down low," or "on the DL," which are terms which originated among African Americans. These terms refer to men in heterosexual relationships who also partake in sexual activity with men. For the most part, these guys don't consider themselves gay, or bi, and usually are very secretive about their sexual exploits around their female partners and family. These guys do not want to get found out (or caught) so they remain "on the down low." The odd thing about these men is that they consider themselves heterosexual, even as their sexual orientation is truly homosexual or bisexual. These secret lives are forced due to communities that are less than accepting of openly gay lifestyles.

What is Transsexual or Transgendered?

This has to be the more difficult of labels to attach. The terms transsexual and transgendered have a different definition depending on who you ask. It is the more pain-filled aspect of sexuality we have to consider. So, please forgive any miss-steps within the definition that may stray from what transgendered folks are about. This is simply my way to help people understand, to some small degree, how we identify our sexuality.

Transgender is a broad term that gets used to cover many "gender expressions." Drag queens and kings, cross-dressers, transgenderists and transsexuals. These are generally people who have their gender identity—how they know themselves to be male or female—miss-matched with their gender anatomy—what their physical outward appearance depicts them to be.

The Gay Revolution: The Story of the Struggle
Buy Now

Some transsexual's prefer to live full-time in their self-identified gender. Some of us may live part-time in the self-identified gender, dressing and acting in a manner most related to that gender. And some transsexuals feel the deep desire to transform their anatomy to that which they identify with by undergoing sexual-reassignment surgery. This surgery will reconstruct the body so a man who feels like a woman will have larger breasts and a female appearance to the genitalia. A man who changes his anatomy to that of a female still cannot become pregnant, unless the anatomy is hermaphroditic, having both male and female reproductive organs. However, a female who revises her anatomy to that of a man, may retain the ability to become pregnant.

Due to the fact that changing from a female to male anatomical appearance does not require the removal of ovaries or uterus, a female to male reassignment still retains the ability to become pregnant. Whereas reassigning from male to female does not include the addition of ovaries and a uterus (not really possible at this time in medical know-how).