What the Church Didn't Tell You...

I know this sounds shocking, especially if you’ve never known this before. I just found this out today. Michael Servetus (29 September 1511 – 27 October 1553) was a gifted man who loved the LORD God and studied Hebrew, Greek and Latin. He refused to accept the doctrines of the Catholic Church, like the reformers, John Calvin being one of them. Though the reformers broke away from the Catholic Church, they carried many of their pagan doctrines and practices with them. John Calvin held to the doctrine of the Trinity and infant baptism, while Michael Servetus did not. Michael trusted Calvin as his close friend and while Michael was forced to live underground, he and Calvin would write letters back and forth, discussing theology, marking up each others’ work with their theological debates. Michael and Calvin believed Jesus was God in the flesh, so why would Calvin have Servetus burned alive?

I don’t know how many of you are familiar with the ‘Oneness’ of God doctrine? I have become familiar with the it because two years ago I had an epiphany of this Truth, without knowing what it was ‘labeled’ and have held to it ever since. It is similar to Trinitarian theology, but different. Trinitarians hold to God in three, distinct Persons, co-eternal in existence, while Oneness believers hold to God as One Spirit, manifested in the flesh of the Son. To put it more clearly, Trinitarians believe Jesus is the eternal Son of God, the second ‘Person’ of the Trinity, and the Holy Spirit is a ‘third Person’ of the Godhead (which in Greek is the word ‘Deity’, not ‘Godhead’). Oneness believers hold that God Himself, Who is the Holy Spirit, manifested in the flesh as the Son of God, and is the Holy Spirit that indwells all believers. They believe any manifestation of God in human form (whether mortal or immortal) is the LORD (YHWH) Himself, as Jesus IS the image of THE invisible GOD.

In researching the history of Oneness theology, the internet claims the Oneness movement began at a revival meeting in Los Angeles on April 15, 1913. That, my friends, is absolutely false. In fact, ‘Oneness’ theology was around PRIOR to the establishment of the Roman Catholic Church. They were the first martyrs for the true faith, and Michael Servetus was one of them. 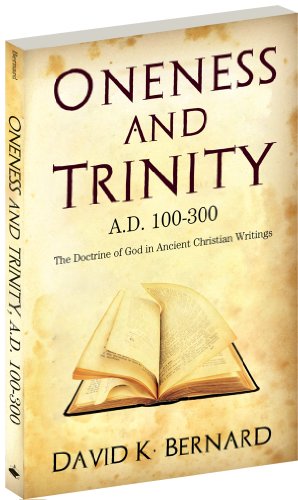 I will first list the early fathers of the Oneness faith, just following the resurrection of Jesus Christ:

Virgina Corwin, a well-known scholar says, “If one term must be chosen to indicate the tendency of his thought, Ignatius must be said to be monarchian.”

Ignatius writes in Polycarp 1:15 “Expect him, who is above all time, eternal, invisible, though for our sakes made visible: impalpable and impassable, yet for us subjected to sufferings, enduring all manner of ways for our salvation.”

He stated that Ignatius (the monarchian) was an example of holiness and endurance and urged the Philippians to follow his example.

Hyppolytus says Noetus believed Jesus confessed Himself to be the Son to those who saw Him, while to those who could receive it, He did not hide the fact that He was the Father.

He had Trinitarian-type thinking, but made surprisingly Oneness statements.

Tertullian (a well-known pagan) wrote “He [Praxeas] asserts that Jesus Christ is God and Father Almighty" and quoted Praxeas: "He says that the Father Himself came down into the Virgin, was Himself born of her, Himself suffered,indeed was Himself Jesus Christ."

Gregory Thaumaturgas says Sabellius believed “the Father and the Son are the same. He asserted that the Father, Son and Holy Ghost were not distinct persons but modes of one divine person.”

The Foundation of Trinitarian Doctrine

It was Tertullian (150 - 225 AD) who first coined the term 'Trinity' (God in three persons) in the year 200. He was converted to Catholicism in 195 and became an ordained Priest in the year 200. He admitted that Oneness Apostolics constituted the majority of believers in his day.

“The simple (indeed I will not call them unwise and unlearned) who always constitute the majority of believers, are started at the dispensation…[of the three in one]…”

Even though this new 'Trinitarian' theology was being implemented in Rome, here are some more notable Oneness believers of that era:

He states, “The Father did not die but the Son…I know one God, Christ Jesus, begotten and susceptible of suffering and beside Him I know no other.”

Eusebius says “Beryllus taught that our Lord and Savior did not exist as a distinct person before the incarnation; and that the divinity of the Father dwelt in Him.”

Says “Many divide and cut to pieces and destroy that most sacred doctrine of the Church of God, the Divine Monarchy, making it as it were three powers and partitive substances and godheads three.”

To firmly establish the doctrine of the ‘Church’ and do away with those who did NOT want to embrace this new Trinitarian theology, the Council of Nicaea, Turkey required all Oneness, Monotheistic, or Jesus Name believers to be re-baptized for re-ordination or have their property confiscated; thus Oneness believers went underground. Why would they need to be 're-baptized'? Because they had followed the ordinance of the Aposte Peter since the Day of Pentecost found in Acts 2:38:

Now, understand that the Roman Catholic Church ADMITS altering the very words of Jesus in Matthew 28:19! Is this not blasphemy?

Yes, Jesus said there would be 'tares' sown among the 'wheat' (Mat 13:25) and Jeremiah 8:8 clearly propehsies, "'How can you say, 'We are wise because we have the word of the LORD,' when your teachers have twisted it by writing lies?"

Regardless of the persecution, the true faith persisted and survived. Following are some more notable disciples of the LORD, Jesus Christ, that refused to embrace the pagan doctrine of the ‘Trinity’:

Disciple of Marcellus of Ancyra

“affirms Christian faith in Father, Son and Spirit to be belief in one God, Christ: He is God, Son of God, Savior, was born in the flesh, suffered and rose for the love of mankind…in Christ the Father is known. God is invisible, none has seen Him at anytime. So He came in name and form such that He could make Himself known.”

Revealed himself Sabellian in his “Carmen Apologeticum” in which he recognized Father, Son and Holy Ghost to be different designations given to the same person.

Held a Sabellian view of the Deity.

Said that “the Father, Son and Holy Ghost are merely titles ascribed to the Father.”

In 1531 Michael Servetus wrote a book entitled “On the Errors of the Trinity.” He said “Christ is in the Father as a voice from the speaker. He and the Father are one as the ray and the sun are one light. An amazing mystery it is that God can thus be conjoined with a man and a man with God. A great wonder that has taken to Himself the body of Christ that it should be His peculiar dwelling place.”

Considering Michael and John Calvin became friends in their 20’s and Michael was born in 1511, the writing of Michael’s book was probably in progress, if not complete. Calvin was two years older than Michael , and though they were friends for 20 years, Calvin handed him over to the Catholic Inquisitors, who condemned him to being burned alive at the stake for his refusal to accept the doctrine of the Trinity and infant baptism. While Calvin vied for Michael's beheading, the Inquisitors chose to burn him alive. Green wood was used, as it burns slower and would inflict a longer torment; straw and sulfur were placed on Servetus’ head to make the heat as hot as it could be! On October 27, 1553 they tried to make Michael confess the ‘eternal Son’, in order to escape his death sentence, but Michael’s last words were "Jesus, Son of the Eternal God, have mercy on me." Obviously, that was not good enough.

Did you know that from 1541 to 1546, prior to the murder of Michael Servetus, John Calvin caused 58 people to be executed and 76 exiled, while many more were imprisoned? His victims ranged in age from 16 to 80. In Calvin's time, those he deemed heretics, even for advocating that Christ died for all sinners (unlimited atonement), were punished either by drowning, a drawn out and slow burning at the stake (as with Michael Servetus in 1553), or beheading. All this was done in public, with city residents compelled to watch the butchery.

Even a Century Later...

In spite of the murder of Michael Servetus and countless others, Oneness theology and faith continued:

He wrote a tract called "THE SANDY FOUNDATION SHAKEN". In it he says “…Must I deny His Divinity because I justly reject the Popish School Personality? It is manifest then,…that though I may deny the Trinity of separate persons in the Godhead, yet I do not consequentially deny the Deity of Jesus Christ.”

He was said to believe, …”Father and Son are names assumed to set for activities of the one Absolute God and cast aside eternal generation of the Son.”

He states “He is the Redeemer and Savior,…as to His Humanity, He called Himself Jesus Christ…Jehovah Himself came into the world and became the Savior and Redeemer.”

As a Presbyterian clergyman and teacher for 24 years he said, …”The one Supreme Personality exists in three personal modes of being, but is not three distinct persons.”

He said, …”could Theodore Parker worship my God? Jesus Christ is His name. All that there is of God to me is bound up in that name.”

According to the statistics of G.A. Boyd, "Oneness Pentecostals and the Trinity" (Grand Rapids:baker Book House, 1992), 10 "Oneness believers constitute the third largest anti-Trinitarian movement in the United States and the world, numbering within the region of over one million in the United States and nearly five million worldwide. Although there are hundreds of different Oneness denominations, the largest is the United Pentecostal Church International (UPCI) having roughly half a million members in America and about the same number worldwide."

But, don't think only the UPCI congregations are 'Oneness' believers! Messianic Jews are, also! Read their statement of faith here: http://www.ahavatyeshua.com/StatementOfFaith.asp,

I have disabled comments for this hub for obvious reasons. However, if you would like to email me, you can reach me at judahsdaughter@gmail.com. Below are some links to other hubs I’ve written that proclaim Jesus IS the Almighty God, my refutation of Calvinism called “DON’T LIMIT HIS LOVE” and my biblical study on the eternal Son. For those of you that hold to Oneness theology, know that you are not alone and we stand united in being hated on account of His name. Amen.

History of the Oneness Doctrine