In the novel The Stanger by Albert Camus, Meursault, the main character, is on trial for murder. Meursault is an incredibly apathetic individual, meant to represent an exaggerated form of mankind as a whole. While being questioned by the examining magistrate, he is brutally honest and unwilling to bend the truth, even when it would be to his benefit. His indifference and heartless honesty enrage the magistrate, who lectures Meursault on his godlessness. The interaction between Meursault and the magistrate serve as a parody on senseless, hypocritical interactions between people in the real world.

During the questioning, Meursault admits to the examining magistrate that he shot the Arab, paused, and then shot him four more times. The magistrate pleads with Meursault to explain the motivation behind the four extra shots, but Meursault does not know the answer and therefore keeps quiet. This causes the magistrate to burst into a fit of God-driven rage, asking Meursault in a “cracked voice” if he knows what the crucifix is (Camus 68). The magistrate then explains that in order for Meursault to be forgiven and saved by God, he must repent. This seems to be a scare tactic or manipulative technique, a last ditch effort for the magistrate to draw more out of the criminal’s confession. Meursault is obviously unlikely to show remorse; in fact, he is distracted and annoyed at the heat and the flies while the magistrate lectures about religion. Meursault comes to a striking conclusion: “I vaguely understood that in his mind there was just one thing that wasn’t clear in my confession, the fact that I had hesitated before I fired my second shot. The rest was fine, but that part he couldn’t understand” (Camus 68). The last sentence of this realization is significant, as it implies that the magistrate, and therefore, the magistrate’s god, has no problem with the fact that Meursault killed a man. Rather, he only has a problem with the details, the way in which he will present the information. This highlights the hypocritical nature of not only people in power, but also of certain religious people. The magistrate’s fit then gets out of hand: “He had already thrust the crucifix in my face and was screaming irrationally, ‘I am a Christian. I ask Him to forgive you your sins. How can you not believe that He suffered for you?’” (Camus 69). This humorous scene has a serious undertone, as Camus comments yet again on the absurdity of some religious people. The insistence of the religious magistrate to convince the overly apathetic Meursault of his salvation is presented as ludicrous, invasive, and ultimately futile.

Camus’ parody on interaction between the religious and nonreligious has some serious parallels in society today. Meursault represents an exaggeration of the average person, someone who doesn’t care much about anyone but themselves and who doesn’t seem to understand or have any interest in taking place in regular social constructs. The examining magistrate represents religious extremists, who push personal boundaries in order to further their own agenda, often with “religion” as an excuse. In today’s society, it is not unusual to find screaming evangelists in crowded areas or large events. These people will yell at passersby, telling them that unless they subscribe to “x” belief, or refrain from “y”, or hate “z”, they will suffer in hell for eternity. These are the same religious people who claim to believe in a “loving” and “selfless” god. The funniest part is that the hateful enthusiasm is wasted on people who don’t believe in the same premise to begin with, such as Meursault. The hypocrisy and irony is nothing short of astonishing. Camus calls attention to this kind of ridiculousness by exaggerating the characters, however the main idea of religious irrationality and hypocrisy is still accurate. 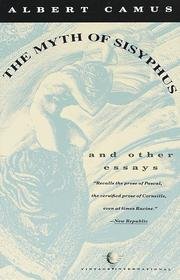 The Myth of Sisyphus and Other Essays
Buy Now