Do You Choose Cremation Over Burial?

A Royal Crematorium In Thailand

My Personal Decision About Cremation

I have never liked the idea of being buried in the ground after I die. This is a very person decision. It is a decision that must be discussed among family members so there is no misunderstanding. I have discussed my decision to be cremated with my family.

The cost of a modern funeral and burial is very expensive, depending on the type of service and casket that is purchased. I am very frugal, and I could never understand why people pay so much money to have a fancy casket that will disintegrate in the ground after a few years.

How Modern Cremations Are Done

Cremation occurs in a crematorium that may be part of a chapel or a funeral home. There are also independent commercial facilities.

The body is usually placed in a plain wooden box. The temperature of crematory can be between 870-980 degrees C. or 1,600-1,800 degrees F. Modern cremators have adjustable controls that will monitor the furnace during cremation. The experienced operator monitors the furnace so he will know when the cremation is complete. The entire process can be less than one hour.

Cremators are computer controlled to ensure legal and safe use. In the United States federal law does not require any container requirements. The container can be a simple cardboard box that fits inside a wooden shell that is designed to look like a traditional casket. This shell can be reused after the cremation is completed and the cardboard box is removed.

The “ashes” of the deceased can be delivered to the family according to the custom of the country. In the United States the cremains are usually given to the family in a thick watertight polyethylene bag that is labeled with the person's name. Some families purchase a special urn to be kept in the home.

Interesting Ways To Keep The Cremains

Some Memorial Gardens have a special place to house urns.

The cremains may be scattered over the ground, usually a favorite place of the decedent.

Airplanes can fly over a special place and a family member can release the cremains over the property.

Cremains may be scattered at sea.

One service will send a lipstick sized container of the remains into low earth orbit, where they will remain for years before re-entering the atmosphere.

Another company claims to be able to turn part of the cremated remains into synthetic diamonds that can then be made into jewelry. I have seen advertisements for bracelets and necklaces made this way.

With a special permit cremains may be scattered in national parks.

The possibilities are limitless. This all depends on the personal wishes of the deceased.

A Horrible Incident In Georgia

There was a horrible incident in 2002 when 334 corpses were found intact on the grounds of a crematoriums in Georgia. The owner of the establishment just didn't do his job in making sure theses cremations were carried out. He was tried and sentenced to two 12 year prison sentences. He will then be on probation for 75 years after he serves his time in prison.

Ashes To Ashes: Dust To Dust

At all the funeral services I've ever attended, the clergy always says as part of his prayer: “ashes to ashes, dust to dust”. The phase comes from the Book of Common Prayer, not from the Bible. This phrase is usually recited as the clergy casts earth on top of the coffin.

A Stupa To House The Remains Of Budda

Some Famous Jews Who Chose Cremation

In modern times as well, one can find famous Jews who chose this way:

How Some Other Religions And Cultures View Cremation

Buddhism: Cremation is acceptable but not mandated. Their founder, Shakyamuni Buddha was cremated.

Hinduism: They feel by cremation, this will induce the soul to pass to its next destination.Open air cremations are becoming less frequent in urban areas. There are crematoriums in most major cities, which are in effect indoor electric or gas based furnaces. Most cremations take place in these indoor crematoriums.

By Hindu tradition Mahatma Gandhi's ashes were to be spread on a river. His ashes were poured into urns which were sent across India for memorial services.

Muslim: They have very strict rules for burial of their dead. The body is bathed and enshrouded in white cotton. The head is positioned in the grave so that it is facing Mecca.

Christian countries and cultures: Cremation has historically been discouraged, but it is accepted now in many denominations.

Catholicism: In 1963, the choice of cremation was permitted in many circumstances. The 183 Code of Canon Law states it recommends the custom of burial should be retained, but it does not forbid cremation. Practices that seem to show disrespect for the ashes of the dead by turning them into jewelry would not be allowed.

The Church of Jesus Christ of Latter-day Saints (LDS): They have discouraged cremation without expressly forbidding it.

Jehovah's Witnesses: They do not condemn cremation, but it is discouraged.

Judaism: Judaism traditionally disapproved of cremation; however as the Jewish cemeteries became overcrowded in the European towns, cremation became an approved means of disposal. Burial is still the preferred option.

Some secular Jews may reject cremation because of the horrific memories of the Holocaust. At many former Nazi death camps, mounds of ashes are still present.

The Orthodox Jews: Their Jewish law forbids the practice of cremation.

My Husband Was Cremated

My husband and I had discussed our wishes to be cremated. After his untimely death, he was cremated. I was given his cremains at the Funeral Home.

One of his closest friends was an airplane pilot. This friend and I flew over my husband's beloved ranch where he had spent many happy days.

As the plane flew over the ranch, I scattered the ashes out of the open window and cried as I watched his ashes float down to the earth.

This was a very moving experience for me, and one I will never forget.

A Personal Story About A Friend's Cremation

I once had a dear friend who died of cancer. Her wish was that another friend, an airplane pilot, would fly over her ranch with her cremains. Her husband would scatter her ashes over the ground as the plane flew over.

I was seated with the other guests watching all this unfold before our eyes. I saw a small ash floating down from the sky. It landed right in my lap.

I carefully wrapped the tiny ash in my handkerchief, and gently carried it home and placed it in my jewelry box. My intention was to save this little ash forever to remember my friend.

I laid awake that night, thinking about my friend's ash. Then I began to fret about it. I began to have second thoughts about keeping it. If she had wanted me to have her ash, she would have let me know.

I crept out of the house and drove some 25 miles to her ranch. I said a little prayer for her, and opened my handkerchief and released the tiny ash. 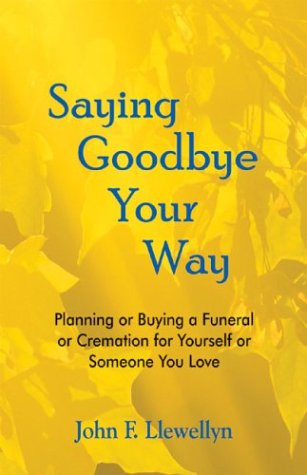 Saying Goodbye Your Way: Planning or Buying a Funeral or Cremation for Yourself or Someone You Love
Buy Now

How Some People View Cremation

Some people find they prefer cremation to traditional burial for many reasons.

My mother was a strict Baptist, and as such, would never have approved of my being cremated. She believed the soul would not go to Heaven.

I believe cremation instead of a traditional burial also relieves a lot of stress and pressure for the grieving family.

Also, I don't want my family to think they have to visit my graveside out of obligation.

In my opinion, the cost factor makes cremation attractive, too. The traditional burial takes up space. I feel I have occupied this space on earth for many years, and upon my death, I do not want to take up more space. I will leave space on earth for the living.

I believe in recycling every thing possible, and I think cremation is the ultimate way to recycle our bodies.

What Are Your Feelings About Cremation?