One of the most famous, psychic mediums of the late 19th century was the Scotsman Daniel Dunglas Home (pronounced “Hume”) 1833 – 86. Although this period in history abounded with “mediums”, the majority of whom were eventually debunked as charlatans, Home was never caught out in any sort of trickery.

Although some critics suspected Home of underhand tactics or of employing conjuring techniques, many high-profile observers who attended his “happenings” swore that his talents were genuine.

One of the more astounding of his talents, (and also the one which would appear impossible to fake), was his apparent imperviousness to fire and flame, which he regularly demonstrated to visitors, and often encouraged them to take part in the demonstrations.

The following account of a séance which took place at Norwood, England in 1868. The account was written by Lord Adare (who later became the Earl of Dunraven). Lord Adare describes how Home, whilst in a trance, became fascinated by the fire in the room, returning to it time and again to poke it and stir the embers. He wrote:

“With his hand, stirred the embers into a flame; then kneeling down, he placed his face right among the burning coals, moving it about as though bathing it in water. Then getting up, he held his finger for some time in the flame of the candle. Presently, he took the same lump of coal he had previously handled and came over to us, blowing on it to make it brighter. He then walked slowly around the table, and said “I want to see which of you will be the best subject. Ah! Adare will be the easiest because he has been most with Dan.” [Home is here referring to himself as Dan.]

Mr. Jencken held out his hand saying “Put it in mine,” Home said “No no, touch it and see,” He touched it with the tip of his finger and burnt himself. Home then held it within four or five inches of Mr. Saal's and Mr. Hurt's hands, and they could not endure the heat. He came to me and said, “Now, if you are not afraid, hold out your hand”; I did so and having made two rapid passes over my hand, he placed the coal in it. I must have held it for half a minute, long enough to have burned my hand fearfully; the coal felt scarcely warm. Home then took it away, laughed and seemed much pleased.”

This was by no means a one-off demonstration. In 1869 the Dialectical Society conducted an investigation into spiritual phenomena. One of the people who testified to their committee was Lord Lindsey ( later to be The Earl of Crawford and Balcarres), who said:

“I have frequently seen Home, when in a trance, go to the fire and take out large red-hot coals, and carry them about in his hands, put them inside his shirt, etc. Eight times I have myself held a red-hot coal in my hands without injury, when it scorched my face on raising my hand. Once I wished to see if the coal really would burn, and I said so and touched a coal with the middle finger of my right hand, and I got a blister as large as a sixpence; I instantly asked him to give me the coal, and I held the part that burned me, in the middle of my hand, for three or four minutes, without the least inconvenience.”

The fascinating thing about these accounts is that Home appears to be able to confer his own fireproof quality to other people and objects. His subjects were also able to handle red-hot coals without discomfort if they had been given to them by Home. Although some of the embers were too hot to even approach too closely, Home was apparently able to place them inside his clothing without burning the cloth.

The most startling of his fire demonstrations concerned Samuel Carter Hall, editor of The Art Journal, who was an old friend of his. Hall was now advanced in age when the séance took place and several other people were present. Home entered trance and walking over to the fire place, pulled out a huge piece of burning coal – so big that he required both hands to handle it. He then walked over to Hall and placed the huge coal on his head and proceeded to gather Hall's hair up around the burning coal!

“Is it not hot?” one of the guests enquired, to which Hall answered “Warm, but not hot”. Home then placed the coal in Mrs. Hall's left hand. She too described it as “Warm, but not hot”, however several other guests who attempted to touch it all burnt their fingers. 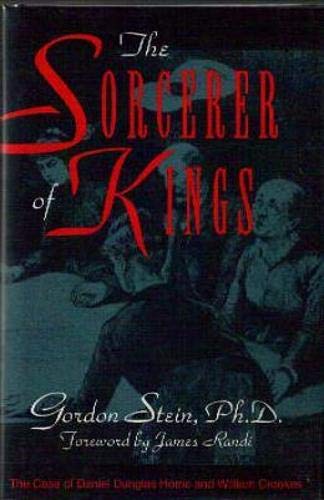 The Sorcerer of Kings
Buy Now

It was said that Home would prepare himself for such feats by “conferring with spirits” with a sort of sign language. An account of such preparation was recorded by another notable medium of the time, W.Stanton Moses who describes a séance in London on April 28th, 1873 attended by none other than Sir William Crookes, one of the leading physicists and chemists of his era.

“(Home), then went to the fireplace, removed the guard and sat down on the hearthrug. There he seemed to hold a conversation by signs with a spirit. He repeatedly bowed, and finally set to work to mesmerise his head again. He ruffled his bushy hair until it stood out like a mop, and then deliberately laid down and put his head in the bright wood fire. The hair was in the blaze, and must, under ordinary circumstances, have been singed off. His head was in the grate, and his neck was level with the top bar. This was repeated several times. He also put his hand into the fire, smoothed away the wood and coal and picked out a live coal, which he held in his hand for a few seconds, but replaced soon, saying the power was not sufficient. He tried to give a hot coal to Mr. Crookes but was unable to do it.”

“... Mr. Home told me to leave my seat and come with him to the fire. He asked me if I should be afraid to take a live coal (ember) from his hand. I said, No, I would take it if he would give it to me. He then put his hand among the hot coals (embers), and deliberately picked out the brightest bit and held it in his hand for a few seconds. He appeared to deliberate for a time, and then returned it to the grate, saying the power was too weak, and he was afraid I might be hurt. During this time I was kneeling on the hearthrug, and am unable to explain how he was not severely burnt... After Home had recovered from the trance I examined his hand with care to see if there were any signs of burning or previous preparation. I could detect no trace of injury to the skin, which was soft and delicate like a woman's.”

Was Daniel Dunglas Home just a clever charlatan like so many of his contemporaries – or was he the real deal? If it was mere conjuring, it would seem to have been a pretty unique act, one that did not exist before and has not been replicated since. It is hard to imagine how even a skilled conjurer could perform feats such as lying down with his head in a roaring unprepared fire without sustaining severe burns. Allied to the fact that his many observers were encouraged to partake in the demonstrations, some of which were burned, and others not by the same coal embers, confounds reason. Whether, in the final analysis, Home achieved his effects by artifice or supernatural means, he must surely deserve the title of The Fireproof man.