Lord Vishnu is worshiped as the supreme God by Vaishnavite Community. According to the Vishnu Sahasranama Lord Vishnu is the master of the past, present and future. He is also the creator, destroyer and sustainer of the Universe. The color of Vishnu resembles to that of the clouds and he has four arms each holding a lotus, a mace, conch and chakra. The Bhagavad Gita has description of him in his Vishvarupa where he gives darshan to Arjun, one of the Pandavas.

The Puranas give details of the 10 avatars of MahaVishnu to preserve the world from the increasing evil and to re establish Dharma. These ten avatars or incarnations of Lord Vishnu are also known by the name of Dasavatar of Vishnu which is a cornerstone in Hindu philosophy. Three of these avatars are in non human form, one in hybrid form and five in the human form. Lord Vishnu has incarnated in different yugas in situations where Dharma was in danger because of certain evil elements in the world. Scientifically one can notice that the first six avatars have striking similarity with the evolution of life. Out of this ten avatars nine have occurred in the past and one is supposed to take place in the future at the end of Kali Yuga which is the age we are living in. The nine incarnations which have taken place so far are 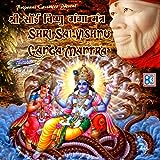 The first 6 Incarnations of Lord Vishnu

This avatar was taken by Maha Vishnu to save the humanity and the sacred Veda text from the flood in the Satiyuga. In Matsya Avatar, Lord Vishnu incarnates himself as a fish in this world and informs King Manu that the world would come to an end by a huge flood in seven days and to survive this and move on to the next yug the king to build a huge boat and take the seven sages, seeds of all plants, one animal of each type along with him. The matsya told Manu that he would appear on the seventh day to propel the boat to Mt Himavan. True to his word, lord Vishnu appeared before Manu in his avatar as fish and propelled the Boat to Mt Himavan and kept them there till the flood was over.

The Kurma Avatar was taken by Lord Vishnu to help the Devas to obtain amrut, the nectar of immortality and gain strength. In Kurma Avatar, Maha Vishnu incarnates himself as a turtle where he asks the gods to churn the ocean of milk after adding medicines into the ocean using Mt Mandara as the churning stick and the serpent Vasuki as rope with the help of Asuras (Demons) in exchange for offer of the share of amrut. Both the devatas he ocean using the serpent Vasuki as the rope. But as churning was proceeding the mountain kept sinking. It is then Lord Vishnu took the form of the turtle to keep the mountain afloat and continue churning. As soon as the nectar appeared the asuras grabbed it. As it would mean destruction if the Demons have nectar, Maha Vishnu took the form of a beautiful maiden and seduced them into allowing her to distribute the nectar herself. As soon as the devas were served the maiden disappeared by deceiving the Asuras.

This Avatar was taken by Lord Vishnu to save Goddess Earth from sinking to the bottom of the ocean. Brahma gives a boon to a demon named Hiranyaksha that no beast nor man nor god could kill him. But somehow Boar was not in the list. Hiranyaksha starts destruction by pushing Goddess Earth to the Sea. He also steals the Holy Scriptures, the Vedas, from the Lord Brahma while he was sleeping. Maha Vishnu incarnates himself as a Boer and raised the goddess Earth out of the ocean using his two tusks. After that he kills the Demon and retrieves the Vedas from him thus ending the destruction caused by the Asura.

This Avatar was taken by Lord Vishnu in to kill the demon king Hiranyakasyapa who had received a boon from Lord Brahma that he would be neither killed by a man or beast, nor in daylight or at night, neither inside or outside a building and neither on earth nor in the sky. Because of this boon Hiranyakashyap considered himself as immortal and Supreme God of all and wanted him to be worshiped by all. But his son Prahlada who was a devotee of Maha Vishnu refused to do so. Angered by this he tries to kill Prahlada in various ways but he escapes unhurt. The king asks Prahlad what he sees in Lord Vishnu for which he answers that Vishnu is everywhere. The King knocks a pillar and asks Prahlad if Vishnu is present in the pillar also. It is then Lord Vishnu incarnates himself as Lord Narsimha in half human and half animal form and emerges from the pillar which was neither inside the house nor outside in the evening when it was neither night nor day and kills Hiranyakasyapa by using his claws by keeping him on his thighs which is neither on earth nor in the sky.

This Avatar was taken by Lord Vishnu in the Tretayuga in order to destroy Bali, the king of demons and Grandson of Prahlada. King Bali was a very mighty and valorous and conquered the whole world. The Devas approached MahaVishnu for help and it is then Lord Vishnu incarnated as the dwarf, the small Brahmin. Lord Vishnu as Vamana asked the king for three feet of land which Bali gracefully agreed. Lord Vishnu then grew in size and covered the earth and heaven in two strides. He measured the third feet by keeping it on Bali’s head.

This Avatar of Lord Vishnu is in Tretayug to kill sixth avatar, to kill the Kshatriya kings of the earth who had become arrogant and were harming people and saints in the forest. Lord Vishnu incarnated as Parshurama, a Brahmin, born to Jamadagni and Renuka and belonging to the Brighu clan. Parashurama always carried an axe presented to him by Lord Shiva. One day King Kartavirya stole the Kamadhenu cow from Jamadagni’s home. Enraged by this Jamadagni went and killed the king and brought Kamadhenu back. Angered by this the son of the king killed Jamadagni. On hearing what happened to his father Parasurama went and avenged the death of his father by killing all the kshatriyas.