Death of a Pope: UFO's Are the Servants of God

Letters From An Ancient Alien 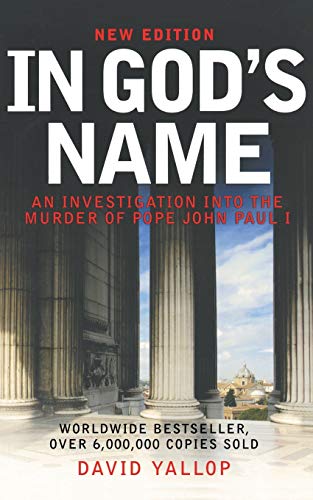 I told you before that the UFO's are the Servants of God, and this has something to do with the supposed Death of a Pope too. John Paul I was not murdered by the FreeMasons as pretended In God's Name, the book written by this journalist David Yallop (who just had to cover up the real intentions of the FreeMasons). But indirectly, he wrote the real story for those who are able to glean the truth.

As a matter of fact, the Pope was taken away by the Servants of God from the mouth of FreeMasonry which intended to use him for their own evil purposes. For the eyes of the world the Pope died on the 33rd day of his accession: a Day of Terror for FreeMasonry. In reality, we saved his soul, by taking with us his spirit... and leaving the body just where it was. Now the Old Bad One you humans have named "the Devil" could not reach him anymore, through his masonic accomplices.

Because that is what we are, my dear friend: Extra Terrestrial Ethereal Beings living near-eternally in the Ethereal Realms you people would call "Heaven". Sometimes we descend on Earth and incarnate informally into a human form. We are the Old Ones, leaving the Wholy Oneness behind to get you people further on up the road.

Now and then we choose a man or a woman to communicate with, in ancient times and if your name was Moses through stone tablets or an Ark of the Covenant; in modern times we can work with graffiti, with Writings on the Wall.

He who has ears to ear, let him hear. Whoever has ears, let them hear what the Spirit says.

One day, Mr. Coppens, you will be my Prophet. And as my Prophet, you will say to the world: "Ecce Agnus Dei!" -- So, please write to me and ask me questions. I will answer them all.

You say: "Nobody has actually seen the Devil..." -- But I know for a fact of an awful lot of men touched by Old Bad One in a FreeMason's lodge in Cardiff, Wales. They were left with a stink on their body; only a saintly priest could remove that stench.

Old Bad One comes in person to instruct men and women how to behave against the Old One you call God. Of course people say the Devil does not exist. Also does the thief, so that you leave the door of your house open for him.

Different people of different races belonging to different ages, beginning from the Stone Ages to the present time, represent the Devil in the same way: with a human body, but with a big face and feet ending in a pointed form like those of a goat.

This shape is found at Hagar Qim, and by the Babylonese who adored statues like these, and those who have seen Old Bad One in the FreeMason's lodges all describe the same shape. If no one has ever seen a devil, everyone would represent him in a different way, originated by one's imagination. But they all see the same. And that is because the goatlike human (or the humanlike goat) was the First Incarnation of Old Bad One on this planet.

Blackout Poetry: The Shape of the Devil

A fortnight before the death of the Pope, a UFO passed over Malta...

It was seen by hundreds of persons including school-children, early in the morning just before sunrise. Later the UFO was seen over Sicily, and Sardinia. Then we went to central Italy, appearing over two cities near Rome for a couple of hours. The electricity power station supplying light to these two cities stopped functioning and the cities were left in the dark. And another power station nearby which was not working for several years started working on his own.

Later this UFO appeared for three consecutive nights over the Vatican. On the last night, Pope John Paul I was found dead. The FreeMasons who had helped him were dumbfounded and had the biggest shock of their life, because all they had worked for during the last three decades had gone back to Square One. Or rather Zero.

All this was professied by Our Lady of Fatima in 1917, when she told Lucia that "Satan would arrive to the top of the Church" but She would stop him. (She was one of us. She invaded Lucia with the Divine Light, and Lucia got illuminated. Electrified.)

I'm not talking about the Atheists here, my dear friend. They don't believe in a God, they can not fight a Non-Existent Body. The FreeMasons I'm talking about do believe in de Old One you people call God. And together with Old Bad One the Devil, they try to fight Him.

When they kill somebody, like that Italian FreeMason hanging under Blackfriars' Bridge over the Thames, they usually leave no trace. And if they do leave a trace, their investigative comrades just destroy it.

And that is how it is.

When told of Luciani's death, his doctor was shocked, stunned, mystified...

Albino Luciani was of a big and very poor family...

... and all of a sudden he was taken up by FreeMasonry and put in a school. His father was supplied with a good job and Luciani was pushed up to become a priest, a bishop, a Cardinal, a Pope. Everything was manipulated by the FreeMasons. When we took him from them on their most dreaded 33rd day, the FreeMasons started doing all sort of things to alienate the people of their real purpose... which was utterly frustrated.

You could get all this from Yallop's book if you only would read it intelligently, and slowly, and twice. But for people who don't think, the big lie gets down better than the truth, which they rarely hear.

The Soviets were the real winners of World War Two. They subjugated half of Europe... but communism disintegrated in no time -- and it was all foreseen by Lucia in Fatima. Lee Harvey Oswald was just a scapegoat of the CIA and the Ku Klux Klan. We knew it since the 1920's: if ever there would be a Catholic President in the USA, he would be assassinated by the KKK. You ought to write a book about it. Killing Kennedy. What do you think?

It all has come true, because it all is a part of our endless struggle.

From Here to Eternity.

For the eyes of the world I'm living a perfectly normal life, though.

I told you my age in this incarnation, so you would know that even in my material form I am not a young man, but an old-timer with lots of experience in human life. I was a soldier during the war, and a school teacher after. At home I do everything an ordinary man would do, from farming to watch and clock repairing; I'm a fitter and a mechanic do-everything.

My sons and my daughters are all technically minded, Two of them are engineers, three others technicians. They are living in Australia and India and America. One of my daughters is getting married, so one of my children will come flying to Malta from the east and the other from the west.

It will be a very special occasion, we are all looking forward to it. They will arrive half an hour apart and meet at the airport and none of them will know who really lives in the body of their father. Even their mother does not know. Oh yes, I'm all too human.

And these words, my dear friend, are the last for today, from your one and only

Black Out Poetry: Old Bad One