... was a Belgian author focused on fringe science and alternative history. He was the cohost of the Spirit Revolution radio show, published in magazines such as Nexus and Atlantis Rising, and appeared in 16 episodes of the Ancient Aliens television series (History Channel). He married Kathleen McGowan in 2011 and died on December 30, 2012 of angiosarcoma, in Los Angeles.

Philip lived in Sint-Niklaas (Belgium) until 1999, when he moved to London, later to Edinburgh and finally to Los Angeles. In the house of his parents a remarkable correspondence was found, which inspired his friend and colleague Patrick Bernauw to these Letters From An Ancient Alien.

"Ancient knowledge will give us a future."

Thank your for your recent letter and kind words regarding my Writings on the Wall. I was very busy today, but now that it is midnight, I can try to answer you. I am a late sleeper.

I see my role not as the creator of a new "theory" regarding Earth's and Man's beginnings etc. but more as a reporter -- since I was there & then. You can call me indeed a poor ancient alien, a long way from home.

I am able to read and understand the ancient myths of mankind, and if you take them as fact and not as mythology, you can do the same. But when I have answered the last of your many questions and all falls into place, it is for those who seek explanations, to find support in the ancient evidence for their claims -- not for me. I am that I am: a pure spirit, which may take over some body and live nearly eternally.

You seem to believe those who say that the Bible is fiction. If so, why don't you try to contradict my explanation of Creation in the Bible. Catholic priests nowadays believe that the Bible is not scientific, but no one has ever been able to contradict my Writings on the Wall. I am a scientific man by nature and not artificially (by learning things by heart). I am a historian and I don't write romances like 'established' scientists do.

Tell me, what are they? A bunch of parrots who say that the continent of America is sinking at the rate of half-an-inch in 100 years just to prove one of their ridiculous theories! After ten years they discovered that it were the oceans rising, because of the melting of the icecap on Greenland. And now we are having the same thing with the ozone layer and the warming of the climate of the Earth!

I have seen this before, Mr. Coppens -- because it happened before. And I can assure you, thanks to the established scientists of this century, you humans of the next century will be... On Your Way Out!

Urbex Graffiti & Black Out Poetry: "You humans of the next century will be... On Your Way Out!" 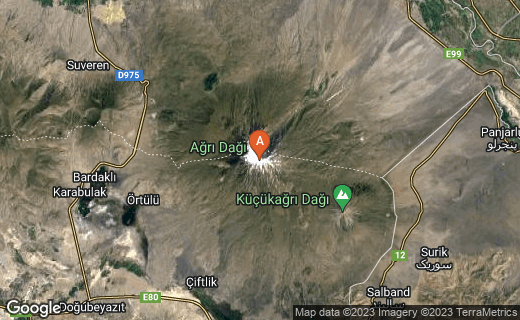 So let us talk about Noah's Ark

The Ark was raised above and over the top of the mountains of the lands around the Mediterranean. Been there, done that. If you read my writings, you will learn the reason.

The Ark has been seen by lots of people on Mount Ararat in the Caucasus Mountains. It is actually on Turkish soil, but to climb the mountain you have to pass from Russian territory. And Russia never gave this permission. Perhaps this will be in the near future.

Aerial photos were taken, but as usual, all was smothered, as the appearance of the UFO's by NASA etc. The clique of the mass media are against anything biblical. As an intelligent person, you should not believe what other people say, but you should chew the cud of it before you swollow. If helicopter pilot George Greene was killed and robbed, it was not for his money, but for the photos he made of the Ark, back in 1953. Greene supposedly drowned in a swimming pool and his pictures have not been seen since.

I can tell you the Mediterranean was mostly dry, before the flood. And it was very populated. There were many temples built on hill-tops, for two reasons: nearness to their sun-god, and because the hill-top provided suitable stone for their building purposes.

But you seem to misunderstand a lot of what I say. That is because you people of the twentieth century like to live fast and so only get a hurried idea of what Old Ones like me have to say. You have to read my Writings on the Wall slowly and at least twice to understand them well. It is not because there are so few words to read, you can get the picture in a minute.

I can proof that the UFO people are the servants of GOD -- being the Old One the Postdiluvians know by that name.

We do not contact humans more openly because humanity has been indoctrinated with a scare of us. Yet there were many friendly contacts in the near and distant past. But the mass media of these days don't like to report them, and that's why I do what I do.

I have written a message about the Super Intelligence of the Antediluvians and I have sent it with a flyer into the world. We did things you people could not do today with all your scientific instruments. Think about the wonders of Malta, with Hagar Qim and the Hypogeum, the Misqa Water Wells and the Cart Ruts -- how did we manage?

There is a circular hollow in the solid rock at the Hypogeum, which served as a voice amplifier. It still works. Look at the marks of a kind of pick-axe with an edge about one and a half inches wide, made with an abrasive wheel to cut grooves and ruts and to polish walls. We gave you something based on the Perpetual Motion idea. We certainly did things you cannot do today with all your knowledge.

What you mentioned about the Andes does not hold for Malta. You should know that "what is good for the gander is not always good for the goose". Things depend on the conditions where they live. The Aztecs had a reason to do what they did, sure of it. But those of Malta had a different reason.

The buildings were destroyed by a wave from the west, but the Hypogeum was not affected. For you it is an enigma how 7,000 human bodies came to be in such a small place. How could it be a burial place and a place of worship at the same time? But I can assure you that the people of Hagar Qim and Tarxien and the Hypogeum (underground) made no human sacrifices. They sacrified only sheep and goats of which lots of burned bones were found.

You should know that the people of Hagar Qim are the oldest known people of the world. Here is the origin of civilization, here in the middle of the Mediterranean. There were no human bones found. What the Phoenicians did was not done by the Romans.

Just Visit the Temples of Hagar Qim and Mnajdra, Malta 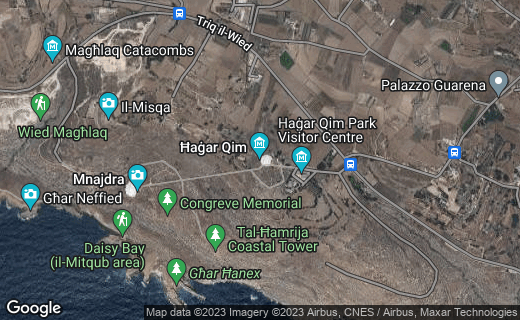 Letters From An Ancient Alien

You say that nobody has actually seen the Devil, but I know for a fact they knew him. They even made a statue of him and buried it inside a wall as a kind of insult. You can still see it today, because the filling of the wall was removed by the wave.

The face is much eroded, but you can distinguish the ears and horns atop of the flat face. Its feet are cloven likse those of a goat, as this Old Bad One appears today to his inmates.

That is all for today.

Atlantis, viewed from above

Thank you in advance for your response.