Haunted Gettysburg:Is this a Ghost of the Gettysburg Battlefield?

On 16, October, 2002 I was staying in the town of Gettysburg, PA. As you can see from the photograph it was a sunny day, The day before had been one of a steady drizzle which appeared almost fog like all day.

I had spent the morning of the 16th walking along Cemetary Ridge and walked from the Grove of Trees at the Bloody Angle across the fields toward the Virginia Monument. I had been using the camera for most of the morning and would not get the exposed film developed for several days. The film was developed at a Walgreens Pharmacy in Melbourne, Florida.

It was not until the film was developed that I saw the fogged image just off center of the photograph. The fog does not appear on any other photographs taken with that camera.

Looking to the Big and Little Round Top

On my arrival at the Virginia Monument I decided to take a photograph along what would have been the front line of Pickett's Division on July 3. 1863. This is the picture. To my right is the Virginia Monument, in the far distance are the Round Tops. To my left is the distant Grove of Trees at "The Bloody Angle" the point where General Lew Armistead and his Virginia Regiments breached the Union Lines and Armistead was mortally wounded.

At the time I took the photograph I was alone, a party of horse riders were about fifty yards away, but no other people were present.

I am not claiming the photograph is definitely a spirit photograph, I realise Gettysburg has developed a reputation for hauntings. I am a believer in an after life though.

I am five feet ten inches (175 cm) tall, from this I would estimate the top of the fog to be about five feet seven inches (168 cm) high. There appears to be a slight human form in that the fog widens about the shoulder region and narrows at where I would say there is a waist. The fog cuts off at what I would estimate is just above knee height.

If the fogged area is an object it must be between me and the shadow of the tree which is lying across the ground a few feet away. You can see the shadow come in from the side of the photo at about center right, the shadow fades as it enters the fog, then reappears from the fogged area continuing towards the lower left.

There is also a definite loss of definition regarding the tree line at the horizon. This suggests, to me, some deepening of the fogged region. Possibly then the fogged region is not a flat plane but has depth as well as height and width.

This is the first time that I have published this photograph, it has been kept in a photograph album for almost nine years now. 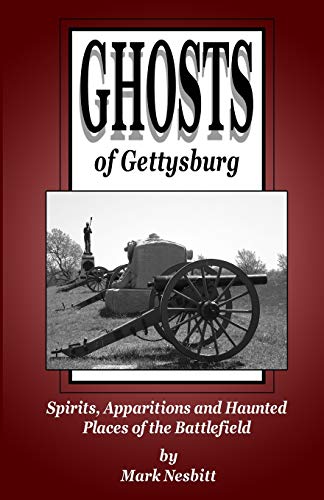 Ghosts of Gettysburg: Spirits, Apparitions and Haunted Places on the Battlefield
Buy Now

So what do you think?

Is this a shadow of one of the soldiers of Pickett's Division? Maybe come back to have a last picture taken before he steps out into the hot July sun, the bugles, guns and shouting of orders echoing in his ears?

Is it an internal fault in the film emulsion caused by the cold and damp the day before/ Possibly causing condensation on the emulsion?Was there an error in processing this one photograph which was not admitted too at the time?

Did light somehow enter the camera and cause the fogging?

Finally, Is the photograph a hoax? Made to deceive.

Some of my other Hubs