The Gettysburg Visitor Center and Museum, located in the Gettysburg National Military Park, is the best place to start any visit to the Civil War battlefield in Pennsylvania. The museum does a very complete job in explaining the causes of the war; the course of events leading up to the July 1-3, 1863, confrontation in Gettysburg; and the after effects.

We recently visited the museum on day trip with some friends from England, and here is a tour of our visit. We were advised that a visit to the museum would take between two and three hours, but we really could have stayed much longer.

The American Civil War and its Causes

''A New Birth of Freedom'' Narrated by Morgan Freeman!

The American Civil War began in April 1861 with the bombardment of Fort Sumter in South Carolina. But the buildup had been building for decades. The Northern states and Southern states increasingly grew apart over the issue of slavery, with many in the north pushing for abolition and the south believing that an end to slavery would destroy its way of life.

The election of President Abraham Lincoln, a Republican who opposed the expansion of slavery, in 1860 led 11 southern slavery states to secede and form the Confederate States of America. Hostilities began when federal troops refused to surrender Fort Sumter.

The battle of Gettysburg was the climax of southern General Robert E. Lee's plan to bring the war to northern soil. The confederates' defeat is widely seen as one of the major turning points in the war, and the north was never again threatened with invasion. The war ended in 1865.

The war and its causes are the subject of a 25-minute film that is the first thing a visitor sees at the museum. Narrated by Morgan Freeman, the movie does a good job of introducing the issue of slavery and why it tore the country apart when it did. Marcia Gay Harden and Sam Waterston help provide the voices for the film.

The movie also probes and examines the cause of freedom in the United States, an issue that still resonates today for many, many Americans.

Ken Burns' The Civil War documentary was first broadcast on PBS over five nights from Sept. 23-Sept 27, 1990, with an audience of 40 million people watching it. He does a masterful job of explaining the events of the war over the documentary's 10+ hours, and it would serve as a great introduction to the topic for almost anyone. It is available on Amazon in both DVD and VHS editions.

Pickett's Charge in every direction!

After the movie you go up the escalator to a room containing the Gettysburg Cyclorama. Officially called The Battle of Gettysburg, the painting is just stunning. It encircles the room and places you in the middle of Pickett's Charge, the final attack by the Confederates on July 3, 1863. The cylindrical painting is an amazing 377 feet in circumference and 42 feet high, and was originally displayed in Boston in 1884.

The museum did a great job with the surroundings, placing bushes and other landscape features in front of the panting to make it even more realistic. Apparently this is the type of setting the original artist, Frenchman Paul Philippoteaux, originally designed the painting to be displayed in, and it works wonderfully in putting you in the scene.

The artist and his assistants painted the cyclorama only after interviewing several of the survivors of the battle and after visiting the battlefield. Even so, it is not 100 percent accurate, the park ranger tells us. The artist, for instance, put himself in the field as a participant in the battle! The painting is one long canvas, and the oil on it weighs four tons, the ranger said.

Above is a small part of the cyclorama, taken from the park service's brochure.

Read About the Battle of Gettysburg

I have found when reading books about the Civil War that they fall into two camps. The first type is heavily into the military details, with page after page of which corps and division was exactly where at what time on what day and under which commander. The second type is more of an overview of the action, with a narrative that tries to place things into the larger context without as much of the particular details. 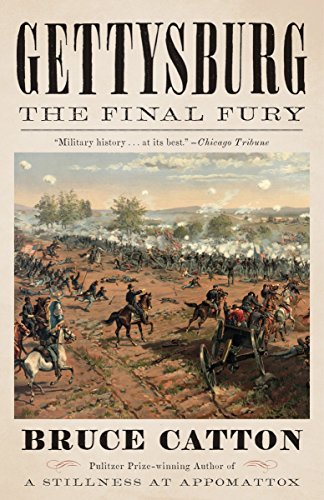 Everything You'd Want to Know About the Civil War!

After the cyclorama you cross a lobby where a video shows how to load and fire a musket, instructions that my son listened to with a lot of interest, and enter the museum proper.

Be prepared to become immersed in the Civil War for several hours.

The museum begins with a history of slavery in the United States and why there was a growing breach between North and South over the issue. There is a very nice interactive display that contains speeches and recitations on the issue from every state in the country, so you can listen to what your own statesmen had to say about the issue at the time.

The museum carries you through the war's initial attack on Fort Sumter all the way through the surrender of General Robert E. Lee at Appomattox, giving weight to most of the major battles in between such as Antietam and Chancellorsville.

Throughout the museum are short videos produced by the History Channel on different aspects of the war, and that also helped put things in perspective. Non-combat exhibits included displays on training, treating the wounded, and the home front. There's a room dedicated to the Gettysburg address, and one that shows the hardships that fell on the people in Gettysburg who had to deal with the dead and wounded after the battle.

Perhaps the most amazing thing about the 22,000 square feet of exhibition space in the museum is the collection of artifacts from the war. The museum boasts of more than 1 million historical items, though not all are on display at any one time.

In addition to canteens, cap boxes, weapons and the usual war relics one expects to see in a historical exhibit, there are several one-of-a-kind items that are amazing and worth seeking out when you visit. Here are some of them:

Gettysburg Collectibles on eBay! - Own a piece of history today

The Civil War is such a fascinating subject for many Americans, and collecting items related to the war and Gettysburg has been a pastime that started while the hostilities were still raging. EBay almost always has interesting Civil War items available, but please remember to check out anything very carefully and make sure you understand all the shipping costs involved.

The Faces of the Many Fallen and Wounded

The Battle of Gettysburg was a major turning point of the war. It was also incredibly bloody. Historians estimate as many as 46,000 to 51,000 men were killed, wounded or missing during the three days, with the Union side suffering 23,055 casualties. Confederate records were unreliable, with the estimates of Confederate casualties running from 23,000 to 28,000.

One of the more touching exhibits in the museum was a wall called ''Faces of the Battle.'' The wall is divided in half, with one side containing dozens of photos of Union soldiers who were casualties during Gettysburg, identified by state and name. The other side contains an equal number of photos of Confederates, identified similarly.

Step a few feet back, just far enough that you can't read the name of the their states, and it's hard to tell the northerners from the southerners. The faces, the haircuts, the expressions are similar, and all of them come across as just young men full of expectations of the future. They look like countrymen, every one.

I guess that's why Civil Wars are the saddest wars of all.

For More Information - The Official Websites

This lens only touches on the highlights of the museum, and there is much more information available about the park and a visit there from these official websites.

The Gettysburg Address - The Words That Reshaped America

Lincoln's 272-word speech, spoken at the dedication of the national graveyard at Gettysburg a few months after the battle, transformed the Civil War into a fight for freedom and equality.

The book ''Lincoln at Gettysburg'' by Garry Wills deservedly won the Pulitzer Prize for its examination of that speech. It is not a history book, per se, though it does provide the details necessary to set up the address. Instead, it is an examination of the text of the address and the man who wrote it.

I highly recommend this book for anyone interested in really learning about the Gettysburg Address.

The Gettysburg Veterans Return to the Battlefield - Remembering the Civil War

This is a very touching montage of footage shot at the commemoration on the 75th anniversary of the Gettysburg battle.

Are You Planning to Visit?

I wrote this review after a visit to the Gettysburg National Military Park. Have you ever visited the battlefield, or do you plan to? If yes, what did you think? If no, why not?

Have You Ever Been to the Gettysburg battlefield?

Our Other Travel Reviews

We have tried to provide some useful information that will help you if you decide to visit Gettysburg. If you did find this lens useful, why not check out our other travel lenses?

Here is your chance to share your thoughts about the Battle of Gettysburg, the museum, the Civil War or anything else about this lens, so don't pass up the opportunity! So, what do you think?