It is tempting to believe that in our modern world, few things remain a mystery and that most things are explainable. These days, there are not many areas untouched by scientific explanation and the cold light of reason.

And yet, every now and then, a case comes along that defies not only mainstream belief, but officialdom as well, and not even their army of experts seem capable of shedding light on what has happened.

One such case is the death of Mr. Michael Faherty - Irelands first official victim of Spontaneous Human Combustion!

Mr Michael Faherty, a 76 year old pensioner, originally from Connemara, was found burned to death in his house at Clareview Park, Ballybane, Galway, on December 22nd. 2010.

Investigators called to the scene of the death admitted to being absolutely baffled as to how Mr. Faherty's death had come about.

Forensic experts investigating the death stated catagorically, that although there was an open fire in the fireplace of the room where the remains of the body were found, it was not the cause of the inferno that seems to have consumed Mr. Faherty.

Investigators also stated that no traces of any accellerant were found near the body, and that there was nothing at all to suggest foul play.

West Galoway Coroner Dr Ciarán McLoughlin who was presiding over the investigation said that in all his twenty-five years of investigating deaths,he had never before encountered such a case.

The court heard that a neighbour, Mr. Tom Mannion had alerted the authorities when he heard Mr. Faherty's fire alarm blaring at about 3am on December 22nd.

Assistant Chief Fire Officer Gerry O'Mally told the Coroner that two experienced firemen who had attended the scene were unable to determine the cause of the blaze. They did not believe that it had anything to do with the fireplace.

The Pathologist Professor Grace Gallagy stated that Mr. Faherty had not been seen for some two to three days before the incident. She said that the body had been virtually cremated making it impossible to ascertain the cause of death due to the extreme fire damage to the organs. 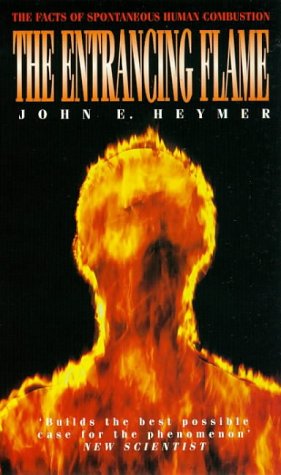 The Entrancing Flame
In this text, Heymer, a retired police officer, looks at spontaneous human combustion (SHC). He tells of how he once investigated a case of what he remains convinced was SHC and how this led to him delving into possible causes and the widespread silence or disbelief of the scientific community. He takes the view that those with intensive specialist training may have very rigid opinions and refuse to see something they do not wish to or which fails to accord with their theories.
Buy Now

The Coroner, Dr.McLoughlin admitted to being baffled and said that he had consulted medical text books as well as persuing other lines of research in an unsuccessful attempt to reach a conclusion.

Although it had been determined that the fireplace was not connected with the death. The Coroner noted that Professor Bernard Knight, who has written about Spontaneous Human Combustion in his book on Forensic Pathology, stated that such cases were nearly always discovered near to an open chimney or fireplace.

Dr.McLoughlin ruled a verdict of "Spontaneous Human Combustion" and said “This fire was thoroughly investigated and I’m left with the conclusion that this fits into the category of spontaneous human combustion, for which there is no adequate explanation,” .